We didn’t expect any breakthrough from the new generation Volkswagen Jetta sedan. Even without knowing the prices, we considered it a compromise after the first meeting. Now they are known, and there is even more confusion. In the absence of localization and with expensive logistics, the Jetta can compete in cost only with the Mazda 3 sedan. Other competitors are cheaper. Well, we take the untested, more affordable Jetta with a 1.6 base engine.

The last generation sales statistics show that two-thirds of buyers just prefer the 110-horsepower initial version. While the most popular sedan in C-segment, the Kia Cerato, has the opposite ratio, in favor of a 150-horsepower two-liter engine. Therefore, we engage just such a three-box car for comparison, turning a blind eye to the price difference: the test Kia, despite the advantage in power, is cheaper! 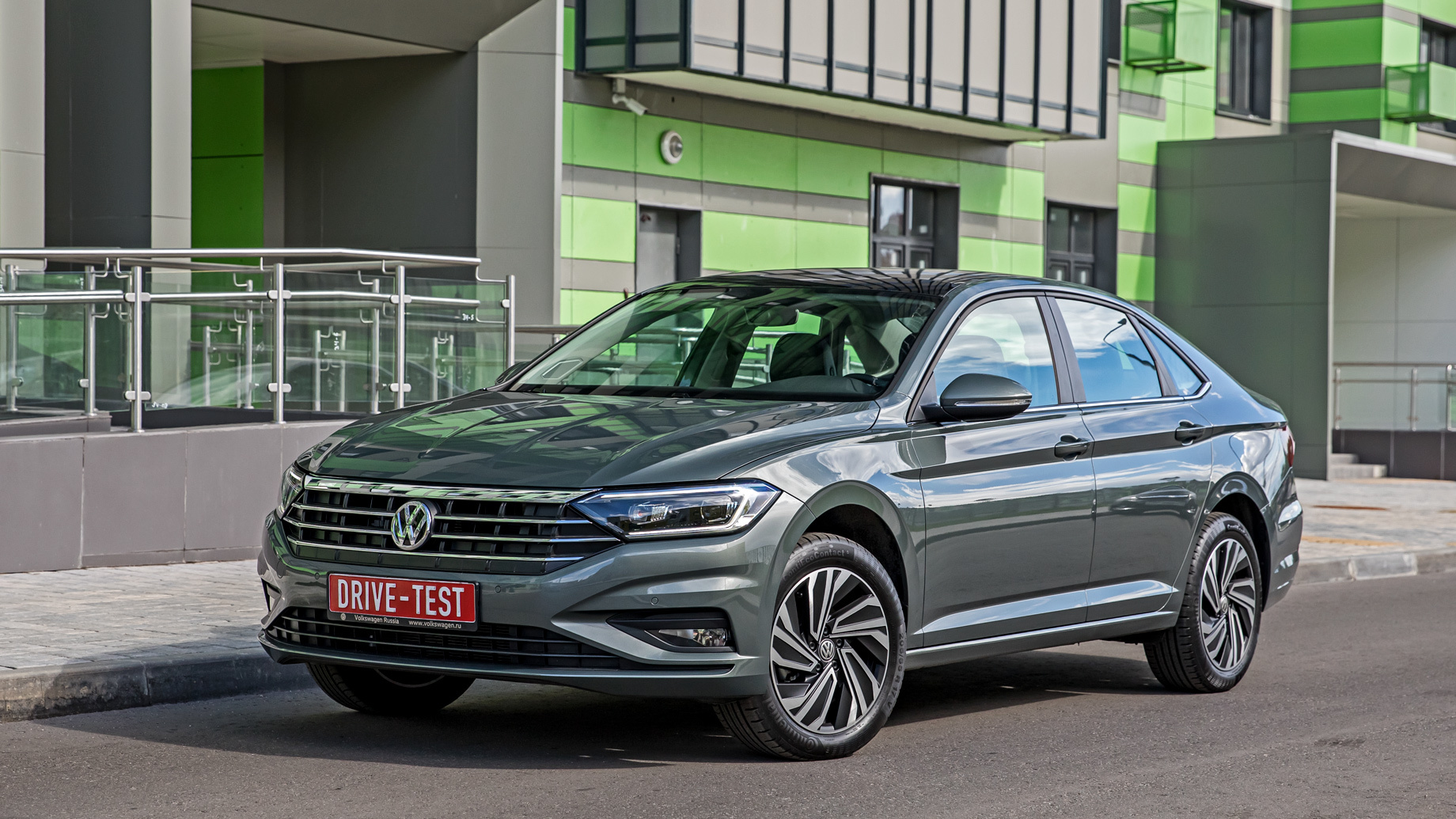 The Volkswagen looks richer primarily due to the massive front bodywork with an abundance of chrome. However, the wheels visually fall out of the arches downwards, as if the clearance increased to 6.1 inches (according to our measurements) was remembered at the last moment, when the arches were already drawn. The un-German developed plastic of the sidewalls gives a sense of manufacturability, but emphasizes the uneven body gaps. Cerato with a simpler design is assembled more accurately.

The exterior door handles of the Jetta fit into the palm themselves, and the Volkswagen patterns of the relative position of the steering wheel, pedals and seat, verified over the years, are used uncut. The front panel is good, embracing the driver with an eight-inch screen of the media system adjacent to the electronic dashboard. Techno again! However, the graphics of the toolkit are scarce. There are only three design options plus a dozen colors to match the atmospheric illumination. The modes are switched by the View button on the steering wheel. And what is this key with the symbols of electronic assistants?

I press it, and the screen says in plain text: “The key doesn’t work.” The Jetta 1.6 doesn’t have adaptive cruise control and other radar systems. Apparently, it turned out to be expensive to remove it.. From bad to worse. The glove compartment is devoid of illumination, the rear passengers — of deflectors, the trunk lid is only half trimmed and “decorated” with exposed wires. You recline the seat back, and you are surprised by the sharp edges of metal in the opening leading to the trunk. The Kia has everything hidden in plastic here, and the rest of the listed nuances don’t cause any questions.

The Cerato doesn’t lose in terms of soft plastic amount, although the interior is decorated more modestly. The layout of controls is verified no worse, and the physical buttons of the media system are more convenient than the touch ones in the Jetta. Having distributed the Internet from your smartphone, you can use the built-in navigator. Even if it is not perfectly integrated (it is called through the menu, and there is no clock anywhere in the cabin), it is irreplaceable for large cities. The built-in Volkswagen navigator doesn’t know about traffic jams. For a wired connection to the phone, a rare “cord” with a USB-C plug is required. 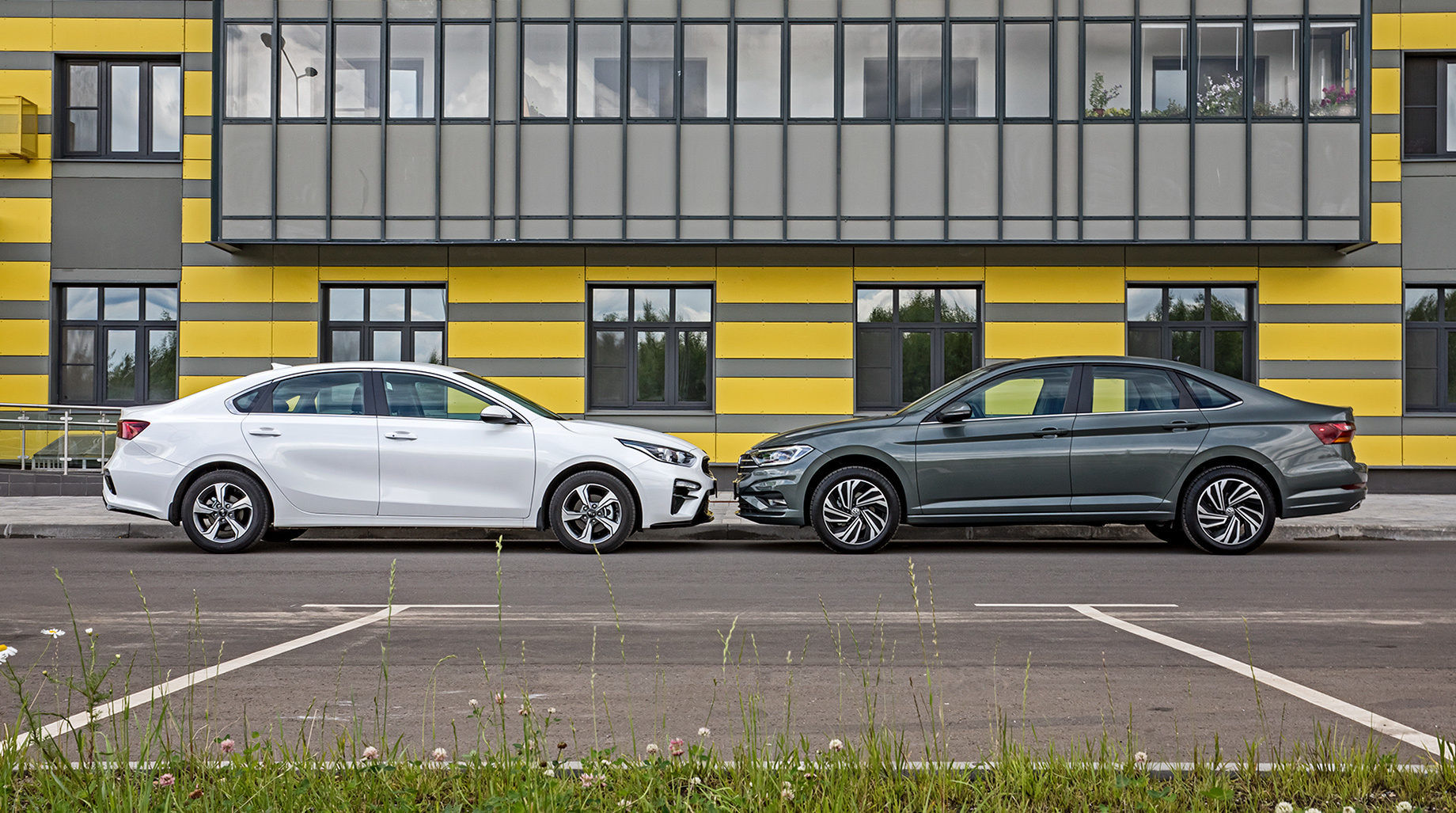 The luggage capacity of the two sedans is equal. The compartments are similar in volume, modest trim with flimsy shelves and bare metal under them, loading height and transformation capabilities. The Cerato’s lid opening is three centimeters lower, but there is a full-size spare tire and a strap for attaching a small bag to the sidewall.

Although the choice of taxi drivers is obvious (look at the prices!); it is more comfortable in the expensive Jetta’s back seat. It is better designed, the knees of the tall passenger don’t rest against the back of the front one, there is an excellent handle on the door for the natural position of the hand, and the third middle passenger doesn’t create a crowd. There is full seat heating, whereas the Kia warms only the pad. The Cerato has a smaller by a couple of centimeters reserve of space in the knees area. It is especially obvious because of the rigid back parts.

The two-liter Cerato has already participated in our comparative tests. At that moment, questions about the ride smoothness arose against the background of the Hyundai Elantra and Toyota Corolla sedans. Now we have a car with massive 16-inch wheels. The situation has smoothed out, but has not improved. The Cerato drives very nobly on a good road, as well as dampens large pits quietly and efficiently enough. However, the suspension seems to multiply short waves of asphalt, especially at high speeds. Insulation from high-frequency vibrations caused by the microprofile of rough asphalt could also be better.

The Mexican sedan is nobler on a flat highway. There is even a premium hint of swinging; the Jetta swallows the road trifle elastically. But it’s better not to pull off such highways. Pits with sharp edges cause booming bumps of such force that we have to apply to the Volkswagen the same epithet as to the Kia chassis: tough! The acoustic comfort of the two sedans is also at a comparable level. The Cerato has solo tires, but life is livable. In the Jetta, road and external sounds are better muffled, but the engine is heard more often than in the Kia. Its faceless wheezing causes nothing but boredom. 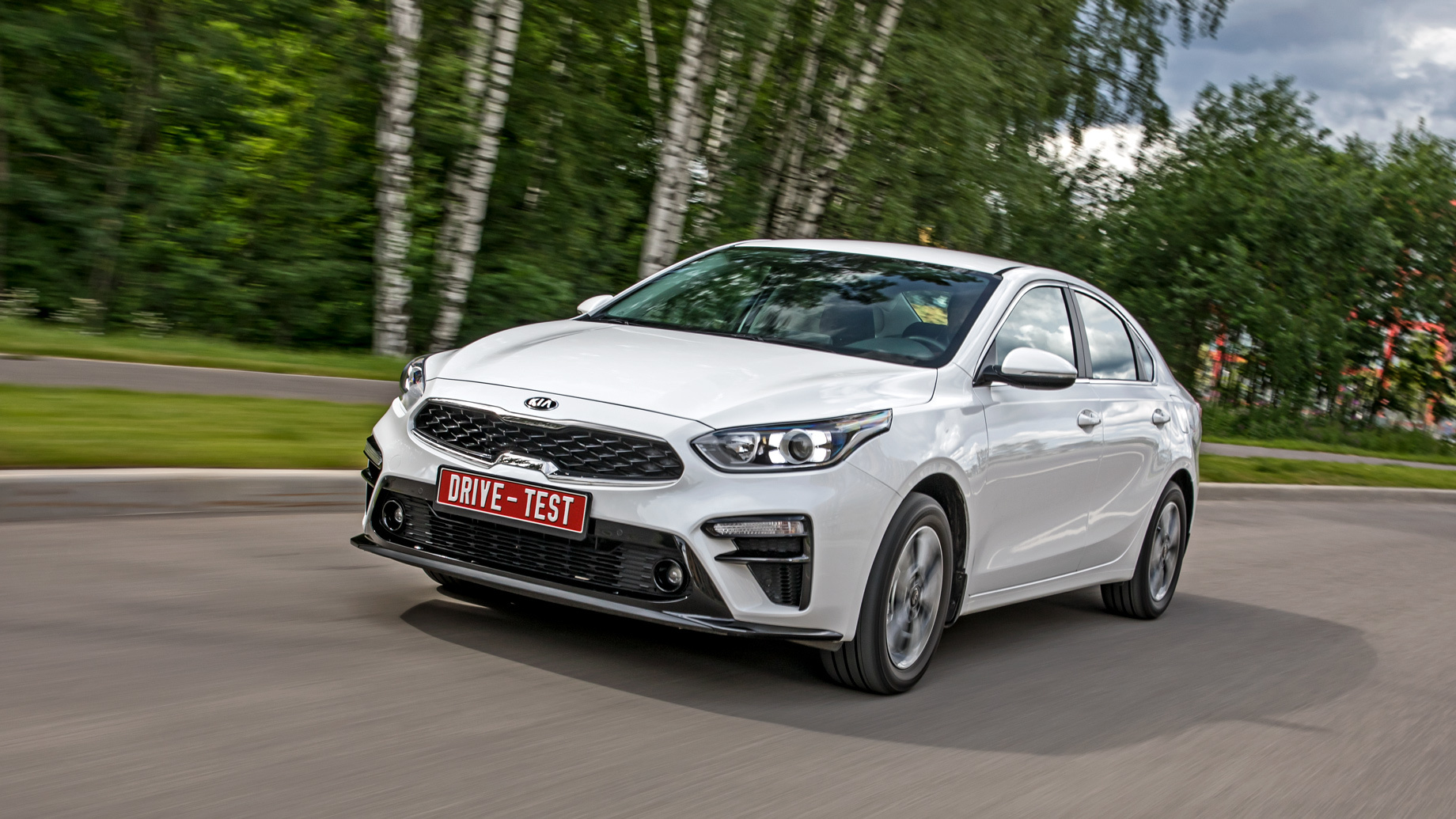 110 hp is not enough for the large Volkswagen, especially 155 N-m of torque. With regular acceleration in the flow from the traffic light, the Jetta gains 3500-4000 rpm in second gear. Although after 2000-2500 rpm, the cabin is already noisy. Acceleration is almost impossible without a jump of the six-speed automatic transmission by two or three gears down, or even four. These shifts are also not unnoticeable. As a result, the Jetta rides jerkily, loudly, and not fast. But the brakes are good: setting of the pedal for service decelerations is almost standard, whereas the Kia requires excessive effort.

But it pleases with traction. At the beginning of the accelerator stroke, the Cerato’s response is more lively, and acceleration “to the metal” when overtaking is not a problem, as with the Volkswagen. The box is also six-speed, and also doesn’t change gears in the smoothest way, but at least it does it less often. The Sport mode, which sharpens reactions without forbidding the automatic gearbox to shift to higher gear, unlike a competitor, is also more useful. Sport is activated by the movement of the selector, and the Eco, Comfort and adaptive Smart modes (I didn’t notice any use from it) by the button.

The Jetta is nicer on a winding road. Yes, the car can’t do without rolls in turns, and reactions lack the accuracy of Volkswagen with European suspensions. But there are no problems with trajectory control, as well as with the reaction on the steering wheel. In the Kia, the steering wheel seems to be too clamped. Even at yard speeds, a deliberate return to the zero position is felt. The effort required when parking is also higher. It’s not difficult to get used to it, but you can’t get the same pleasure as from driving the Jetta.

The problem is that all the pleasures in this Volkswagen are dosed and not balanced among themselves. The snazzy design is smashed against a weak power unit. The comfortable interior is in contrast to low ride smoothness and engine noise. A normal 1.4 TSI torquey motor requires an additional payment. That is, a test sedan in the same configuration would cost a large sum! Even if we equalize the options and add leather seats with an electric drive for driver, LED headlights, 17-inch wheels to our Kia, we will get the GT Line+ version which is cheaper. Checkmate, Jetta. 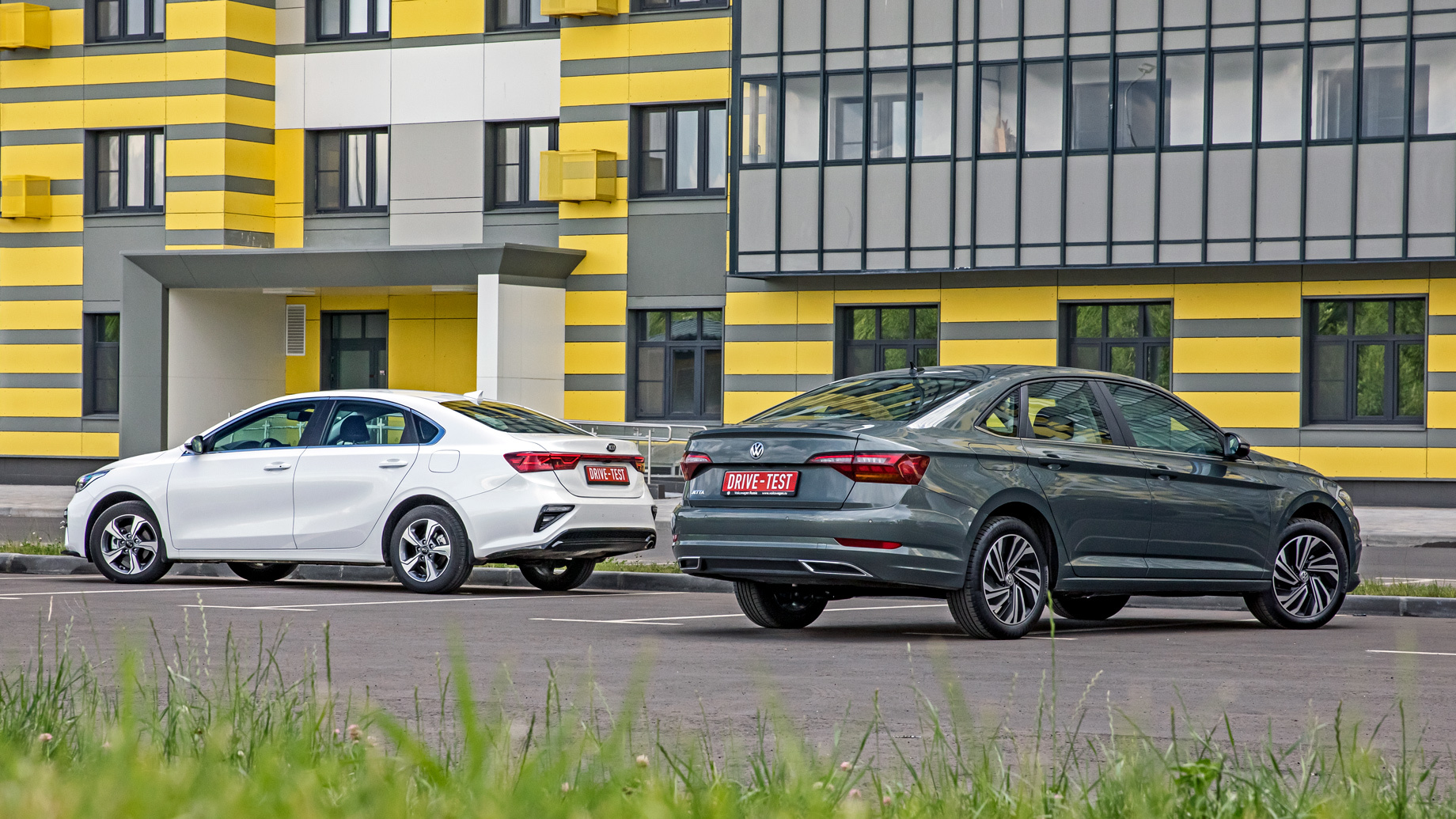 Our colleague suggested looking for the target audience of the Jetta in corporate fleets, where it is customary to use Volkswagen cars. There is even a similar organization stationed in our business center. Top managers drive the Audi A8, A6s are distributed to the heads of key departments, Passats to auxiliary ones, and regional representatives ride the Polo or the Rapid. The Jetta is a transport of white-collars that don’t have the Passat by grade. It is difficult to imagine any other use of the Mexican Jetta.

This is a translation. You can read the original here: https://www.drive.ru/test-drive/kia/volkswagen/5f105d4dec05c4147d0000e7.html

Please type your email in the field below and click "Subscribe"
January 07, 2019 Secrets of modern car washing 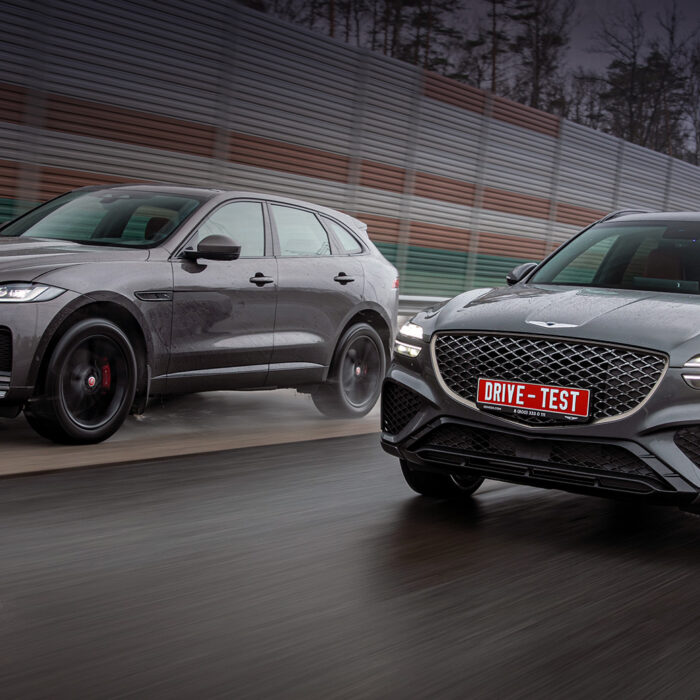 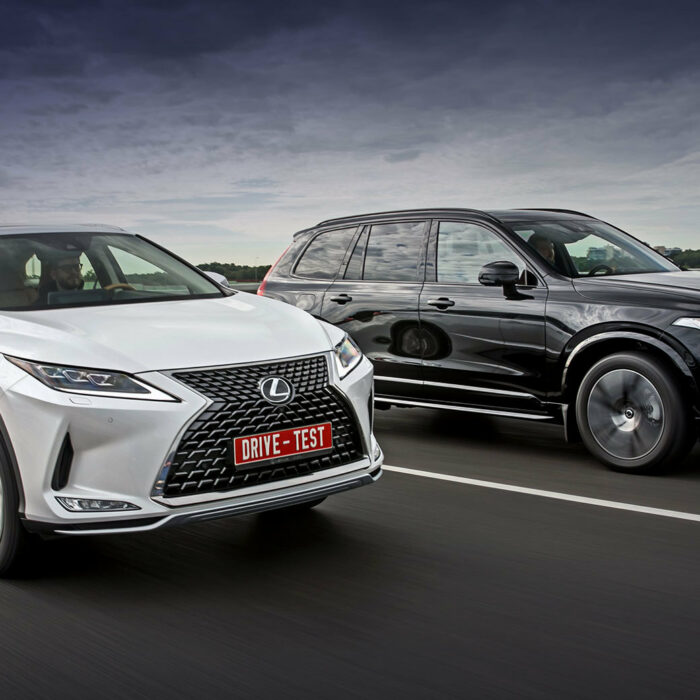