For the first time, the mention of Peugeot surname dates back to the 15th century. It was then in the annals a note appeared about this family, that lived in the vicinity of Montbéliard (now Vandoncourt in the province of Doubs), the main occupation of which was agriculture.

In 1910, the cousins ​​Jean-Pierre and Jean-Frederic Peugeot decided to redesign one of their mills in a place of Su Crata to a small industrial enterprise, known as Peugeot-Freres et Jacques Maillard-Salins. Initially, the family business was limited to the manufacturing of various steel products. Clock springs were produced, as well as sheets for saws and steel strips. In 1818, a rolling mill was created, and the brothers moved to the original technology of metal processing. Six years later, there was a significant increase in production, which allowed them to process almost one and a half centners of steel raw materials a day. The range of products continued to expand, and Jean-Pierre with Jean-Frederic began to produce more sophisticated products for that time: coffee grinders, tools, mills for spices and coffee, hooks for crinolines, irons, sewing machines, umbrellas. New plants were set up, that were included in the register of the French metal-working industry enterprises. By 1882, they exported the manufactured products to Turkey, Switzerland and Italy.

The Peugeot family’s experience in the production of thin metal rods allowed them to start the production of spokes for bicycle wheels. The grandson of the brand’s founder, Armand Peugeot, who became interested in cycling while studying in England, became the chief companion of new products’ development. It was on his initiative that a series of bicycles with a chain drive began to be produced. In 1882, the world saw the first Le Grand-Bi bicycles, that used wheels of different sizes (1.86 m was the diameter of the front wheel, 0.40 m – the rear one). The production of Peugeot bicycles quickly gained pace due to the increased consumer demand. By the rapid growth in the volume of components orders, it became obvious that the market of bicycle construction was very promising. Soon Peugeot became the leading manufacturer of bicycles in France – and it remains so until now. In addition to bicycles, the Peugeot facilities manufacture mopeds, motorcycles and scooters. 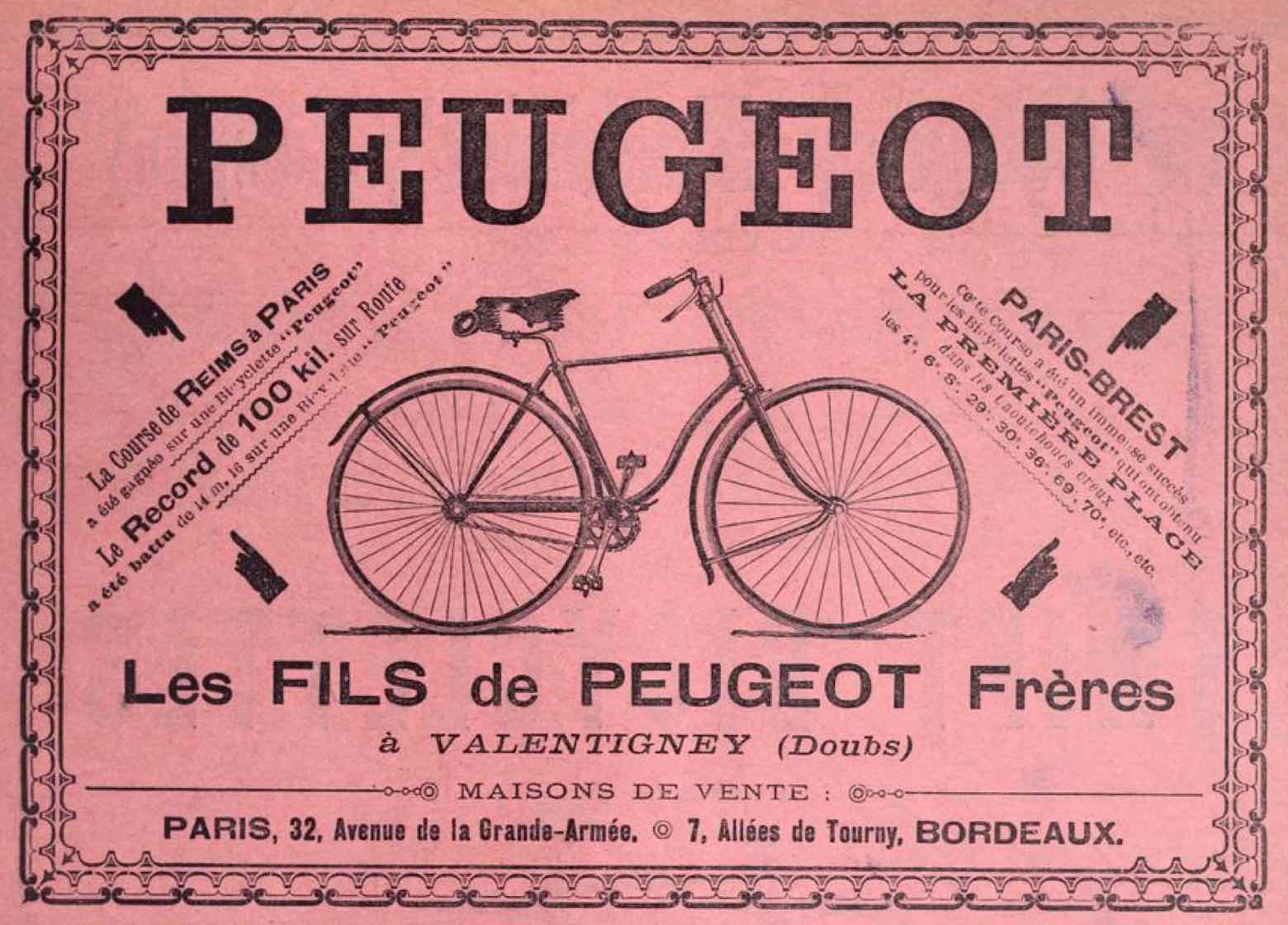 Peugeot logo as a brand symbol

Every car manufacturer has its logo. Peugeot is not an exception. For more than 120 years, the original symbol of the brand, the French heraldic lion, has remained unchanged.

On the first vehicle, produced in 1882, there was an emblem in the form of a lion, unfolded to the left, with a royal crown. Such a symbolism was chosen not by chance. The province in France, which was the founder of Peugeot, has a lion on its coat of arms.

The lion’s direction has never changed for 120 years. But the figure itself has undergone many changes. In 1891, the crown disappeared, and the body with the mane increased in size. The color of the lion was changed from black and white to gold, which is a symbol of wealth, luxury and success. In 1912-1920, the logo was deprived of the lion image. However, after the First World War, the lion reappeared. Its size, appearance and background color changed many times. 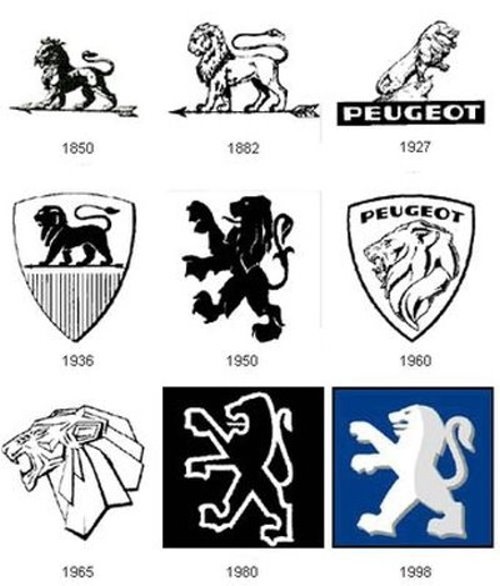 The last evolution of the emblem occurred in 2000. The beast became convex, and the name of the Peugeot brand was put under the figure of the lion. The animal is depicted on a dark or black background. In some exceptional cases, the substrate may be red.

Armand Peugeot was inspired by the idea to create his own self-moving crew. It was Armand who motivated the Peugeot family to start manufacturing cars, even though the bold experiment wasn’t very much in favor of the rest of the family. Armand foresaw the immense potential of this latest invention and tried to establish contact with like-minded people who appreciated the inventions.

Very opportunely it was proposal from the famous specialist on steam engines, Leon Serpollet, to build a steam car. The first Peugeot car, named “Serpollet-Peugeot”, was presented at the World Exhibition in Paris in 1889 – the centenary of the Great French Revolution. 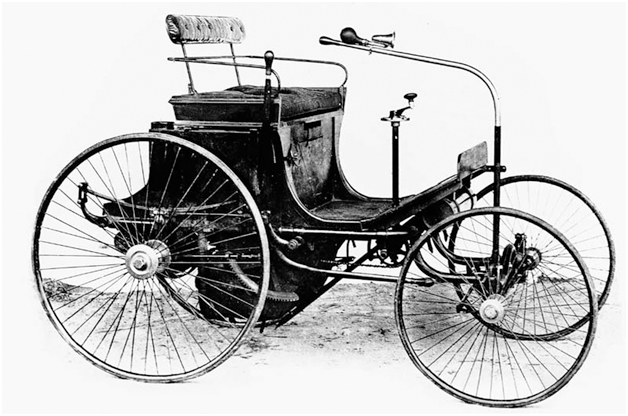 However, the first experience with a three-wheeled steam engine was considered unsuccessful. During the rally Paris-Lyon, car suffered a series of breakdowns and caused the owner a lot of trouble. After that, Armand decided not to mess with steam engines anymore.

In 1891, a four-wheeled car with a two-cylinder gasoline engine from Daimler with a capacity of 1 hp and a volume of only 563 cubic meters was produced. The motor in such a car was from Daimler. In the same period, the company’s name was changed to Les fils de Peugeot frères (Peugeot Sons), and just in 1891 four cars were produced.

In 1894, Armand Peugeot expands the product range, and almost simultaneously the Type 5 (two-passenger), the Type 6 and 7 phaetons, the Type 8 – Victoria, the Type 9 – Vis a vis and the Type 10 – Estate appear. Thus, by 1895, the production volume had grown to 130 cars. But in 1895 the model line expanded with the addition of the two-seat Type 11 and the closed estate car Type 12. During the Paris-Bordeaux-Paris rally, Edouard Michelin experienced the first pneumatic tires on one of Peugeot cars.

In 1896, a dispute arose in the Peugeot family, as a result of which the interests were divided – the sons of Armand’s cousin Pierre, Robert and Jules as Peugeot sons (Peugeot Freres …) switched to making tools, bicycles and motorcycles.

Armand, on his share of capital, organized his company – Societe des automobiles Peugeot (Joint-stock company for the production of Peugeot cars) in the town of Audincourt. The focus was on the production of cars for travel and trucks.

But Armand needed his own engine, and his development of a two-cylinder engine  with opposite position of cylinders and capacity of 8 hp became successful. In 1896, at Peugeot enterprise, its own engine was produced, and the company ceased to depend on anyone. Cars began to be produced with a classic engine arrangement – in front.

In 1897, Armand builds an automobile factory with a total production area of ​​50,000 square meters in Audincourt, in the province of Doubs, and another – in Fives-Lille in the north of the country – the first Peugeot factory outside of Franche-Comte. Since that time, Armand Peugeot had been updating almost the entire range of the Type 14 (two-passenger), the Type 15 (phaeton), the Type 16 (Via a vis), the Type 17 (very small car, not requiring a driver’s license) and the Type 18 (eight-seat estate car) – all with Peugeot engines. In 1899, the Peugeot catalogue contains 15 models ranging from two- to twelve-seat with a weight of 720 to 1250 kg. At the turn of the century, Peugeot became a major automaker. In 1900, 500 cars and 20 thousand bicycles were produced. 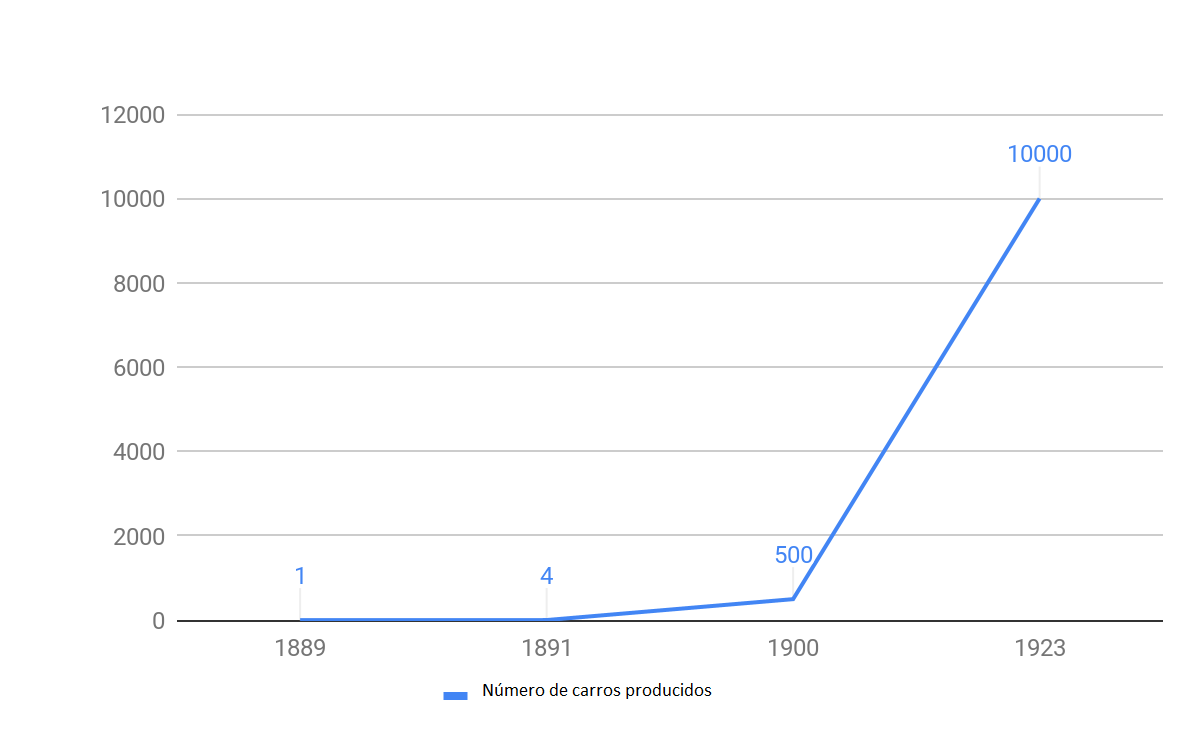 It is Peugeot that first uses a hood and rubber tires; instead of control levers, a tilt steering column with a steering wheel appears; for the first time, a disconnected transmission is put; a rack-and-pinion steering gear and a drive line to the rear axle are invented. In 1902, a Peugeot truck was awarded a national prize, and a Peugeot with a capacity of 20 hp won the first place in La Turbie (Alpes-Maritimes) at a speed of 25 miles per hour. 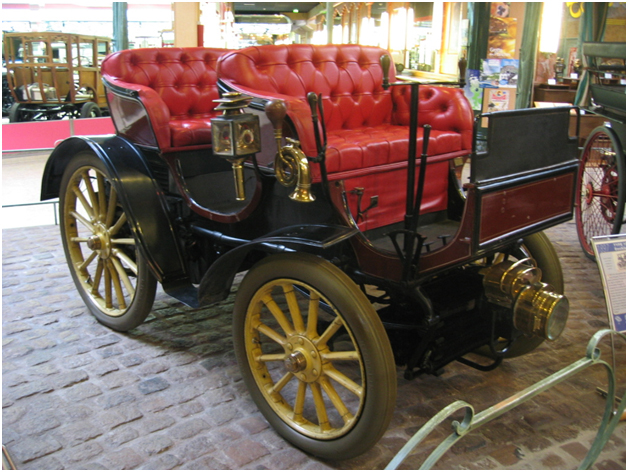 In the early XX century, Peugeot, being in line with the trends of the time, strives to create a cheap car, as simple as possible, reliable and adapted to urban conditions. For these purposes, the company invites the distinguished future engineer and designer E. Bugatti. As a result of this cooperation, in 1913, a prototype of the “national car”, the Peugeot Bebe (“Baby Peugeot”, “Little Peugeot”), appears. It was the first light, compact, two-seater single-cylinder car with an engine capacity of 652 cc at a reasonable price. The car was no longer intended solely for privileged classes, it became a commodity for the middle class, and soon it was destined to become a truly folk vehicle. Constantly improving, the car had been sold for ten years, after which a new generation model with the same name appeared on the market. The Bebe has received universal recognition, both at home and abroad. From 1913 to 1916, more than three thousand such cars were produced and sold.

Also in 1913, the Peugeot Goux was created, which developed a speed of 187 km/h at the Indianapolis car race, an absolute record of those years. At the ACF Grand Prix, held in July 1912 in Dieppe, Boulot won with the Peugeot L76. It was the first car in the world with an engine with a camshaft and four valves on each cylinder.

Before the First World War, the Peugeot factories produced half of all French cars. At that time, France was the world’s largest motor vehicles manufacturer, therefore, Peugeot was the world leader in the automotive industry.

In 1923, the number of produced cars already exceeds 10 thousand units. The 1930s were marked by the appearance of an electric canopy top lift and an independent front suspension on Peugeot cars. In 1941, the Peugeot designers created a light vehicle for traveling around the city. It was a three-wheeled electric cycle. In 1957, the Peugeot 404 was produced, which is considered an “eternal” car. It has several modifications. Until 1975, a total of 1.4 million units were produced.

Peugeot concern in the war years

With the outbreak of the First World War, Peugeot changed. Some factories produced automatic weapons for combat vehicles, others were transformed for the production of aircraft engines, trucks or bombs. Military needs required increased productivity. Armand Peugeot decided that it was time to adopt the American methods of conveyor assembly, and sent a group of engineers to Detroit to study the production methods created by Taylor. After their return, the methods of conveyor production were introduced at Peugeot factories, and the production capacity at one of these factories increased from 3,500 units in 1914 to 5,000 units in 1917. A total of one thousand motorcycles, 63 thousand bicycles, 3 thousand cars, 6 thousand trucks, 1,400 engines for tanks, 10 thousand engines for aircraft and 6 million bombs and shells. 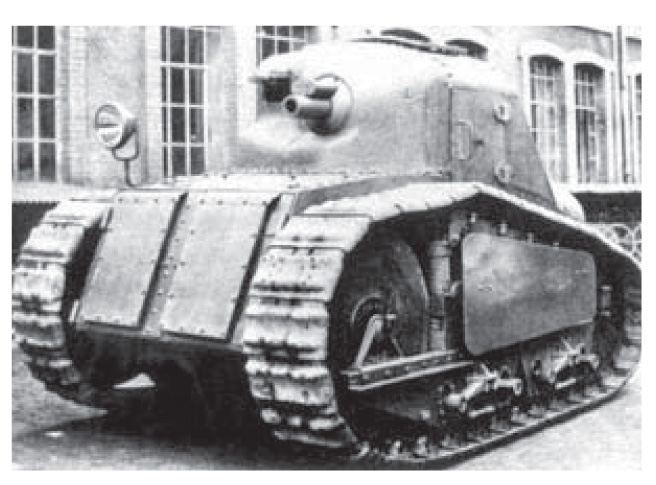 During the Second World War, the company’s management came under the control of Volkswagen, and the Germans tried to establish there their own production of cars under the brand VLV. But the French resistance by any means delayed the pace of work, and the occupiers couldn’t raise the productivity higher than 10% of the pre-war level.

The development of the Peugeot automobile concern nowadays

Firm Peugeot now also owns firm Citroen (the share of the latter began to be acquired in 1974). Subsequently, one company Peugeot Societe Anonyme (PSA) was created. However, both brands are preserved at the same time.

Peugeot also controls the Maserati brand and headed the European division of Chrysler in 1978.

In 1996, the Partner model was released. This car was produced in quantities of more than 1 million units in just 33 months.

The modern concern represents the largest private enterprise and is on the second place in Europe on car manufacture. During 2012, the volume of cars production exceeded three million units, and more than 1.6 million cars saw the light under the Peugeot brand.

To summarize, we can say that for today Peugeot produces comfortable, reliable and adapted for various conditions cars. Its specialists continue to improve their designs further. They use for this purpose new production technologies and try to create even more perfect vehicles. 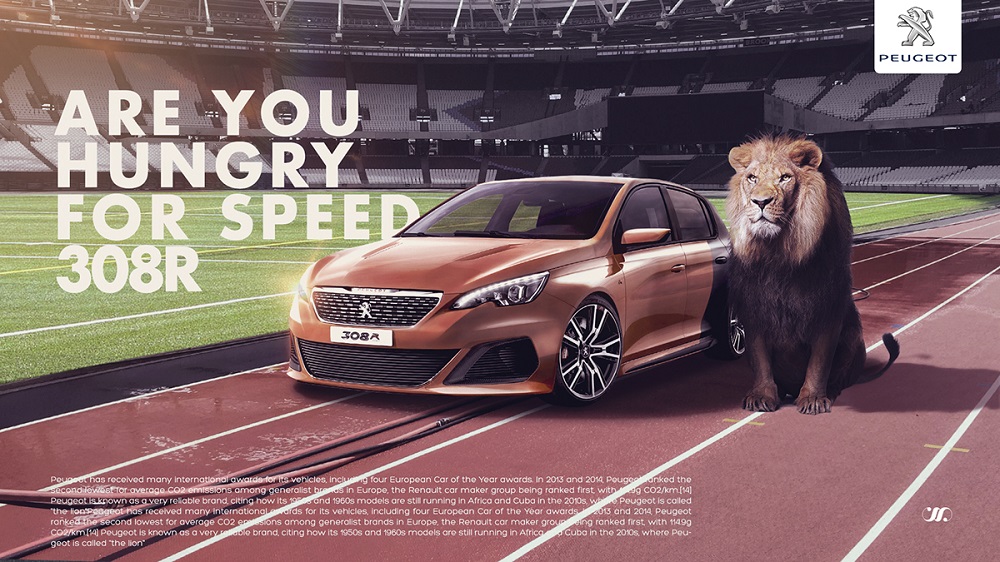 Peugeot is surprisingly popular today. But it can only be driven by a person who has a driver’s license. Even if you are in France. It is optimal when the driver’s license is international. It is convenient and helps to avoid many formalities. If you aren’t yet a happy owner of an international driving license, we invite you to process it directly on our website. It doesn’t take much time, and the result will be flawless: you will get an international driving license quickly and with little effort.