Passive safety: means that will mitigate the consequences of an accident

Automotive safety is conventionally divided into two types – active and passive. Active safety is systems and devices of a car that allow it to avoid a collision. And passive one is the ability of a car to save the life and health of passengers if the emergency situation still occurred. There are a number of means to mitigate the consequences of an accident in the arsenal of any modern car: seat belts, airbags, crumple zones.

What happens to the car and its passengers in a frontal collision? The car crumples and stops, and the passengers continue to “fly” forward by inertia, towards a steering wheel, a dash and a windshield. It would seem that there is not much space in the cabin of the car, it won’t be possible to accelerate much (and, therefore, bump). You wish! After all, the acceleration reaches tens of g, and such an impact can be equivalent to a jump from a high-rise building.

In order for live people to stay alive and not be injured during a serious accident, their speed in a collision must be reduced as smoothly as possible (not without reason multi-tired mats are laid for jumping from the height. Moreover, it is necessary to reduce the speed so that there is enough flail space inside the car. And this is already a task that imposes mutually exclusive requirements on the load-bearing structure of the car.

It turns out that the body should be both rigid and malleable at the same time. So, the frame of the living zone in which the driver and passengers are located is made rigid – on impact, it deforms last. The load-bearing “cage” of the cabin is made of extra high strength steel, there are strong bars in the doors that don’t allow them to crumple. And special zones are made relatively malleable – the speed will be reduced due to their deformation. The engine compartment and trunk are exactly the so-called zones of programmed deformation. Cars began to be made this way relatively recently. Previously, no one thought about it, and cars crumpled evenly – both the body and the interior suffered. And you can see that, as a rule, the front of modern cars that have had an accident is smashed, and the interior is intact.

By the way, the engine can be a big problem in a head-on collision. Therefore, so that it doesn’t fly into the cabin in a collision (which doesn’t bode well), its supports and the motor shield are made so that it moves as low as possible or even falls down without causing any harm to the cabin.

A rear impact is no less terrible. In this case, passengers have a risk of neck injury. To avoid this, humanity invented head restraints, and then active head restraints. The first ones just hold the head, not letting it lean back too much. And the latter “jump” forward themselves, as soon as the accident occurred, providing instant support to the head and not allowing it to move at all.

But that’s half the battle. In order for people to get the least injuries, they need to be held in a very special way during an accident.

We all know the methods from the cradle, but they don’t become less significant for that. These are devices, systems and constructions that pursue only one goal – to “catch” a person in time and to reduce his speed as carefully and smoothly as possible. Of course, a large trampoline would prove itself better than others in this field. It is able to most harmlessly damp the energy and speed of an object falling on it. It is soft. It is a pity that there is no place for trampolines and multi-tiered mats in a car. But there is a place for seat belts and airbags.

Seat belts, as well as many other useful solutions, moved to a car from aviation. At first, two-point seat belts which “held” a passenger’s belly or chest were installed on cars. Less than half a century later, engineers realised that multipoint design is much better, because it helps to distribute the pressure of the belt on the body surface more evenly in an accident and significantly reduce the risk of injury to a spine and internal organs. In motorsport, for example, four-, five- and even six-point seat belts are used – they “tightly” hold a person in a seat. But it was three-point ones that caught on in civilian life because of their simplicity and convenience.

In order for the seat belt to do its job properly, it must fit tightly to the body. Earlier, seat belts had to be adjusted, fitted. The need for manual adjustment no longer existed with an introduction of inertia seat belts – the reel spins freely in a normal state, the belt can wrap around a passenger of any build, it doesn’t immobilize, and every time a passenger wants to change the body position, the belt always fits tightly to the body. But the inertia reel will immediately fix the belt at the moment when force majeure comes. In addition, powder charges are used in belts on modern cars. Small explosive charges detonate, pull the belt, and it presses the passenger against the seat back, not letting him hit. 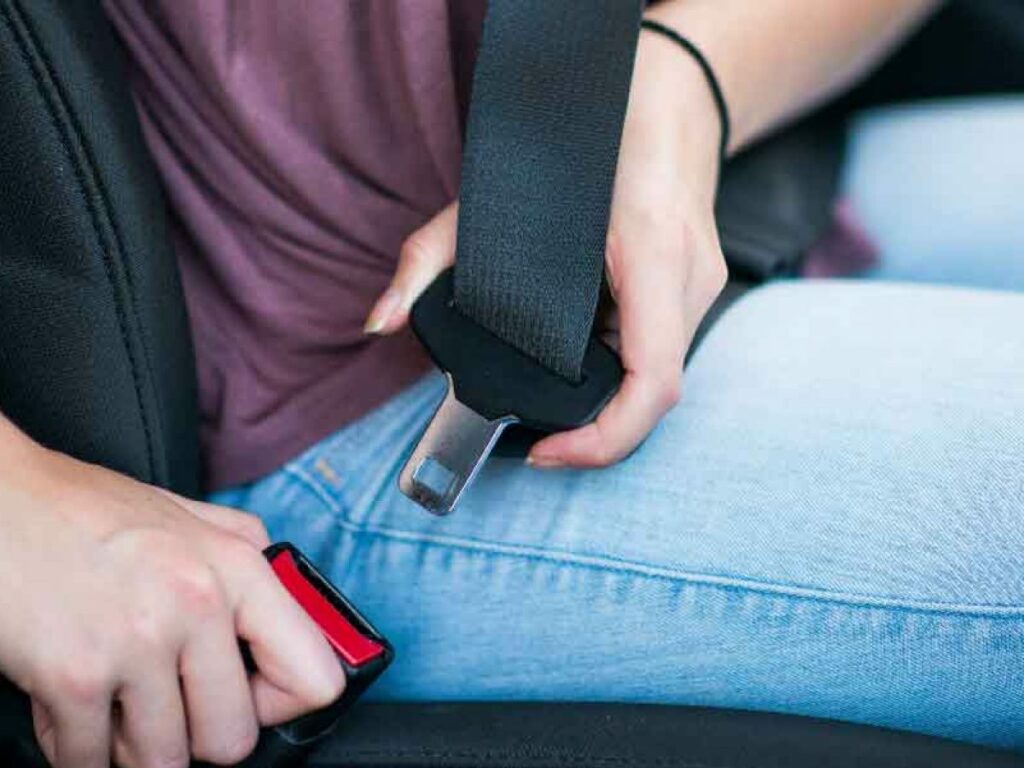 Seat belts are one of the most effective means of protection in case of an accident. And although they are the oldest old, their design is constantly changing and improving. Airbags are probably the second most important invention after belts.

The prototype of the modern airbag was patented back in 1953. Needless to say, the idea of inflating folded bags during an accident was more than bold at that time. The most daring from developers seized on it, but fell on face – there were simply no necessary technologies for implementation at that moment.

Initially, there were several options for filling of the airbag vessel. For example, some engineers suggested pumping gas, which would be stored under high pressure in a cylinder, into the vessel. But the principle of pyrotechnic filling of the airbag outweighed. It was it that gave the opportunity to inflate the airbag instantly – in just 30-50 thousandths of a second. Engineers tried a lot, including rocket fuel, to find the necessary combustible which worked properly with a small charge size. Today, compact and lightweight “tablets” made of a crystalline material, sodium azide (NaN3), are used in airbags as a pyropatron. If the compound is heated to a temperature above 330°C using an electric current, it will begin to decompose into nitrogen and sodium at a speed that allows to fill the airbag vessel and bring the gas pressure to the operating value in just 0.025-0.05 seconds.

The activation of the airbag is dangerous by a sharp pressure jump, which can lead to injury to eardrums and contusion. After all, the opening of the vessel (sometimes several at the same time) occurs in a small enclosed space of the car interior. There are several approaches to solving this problem. For example, the speed of the airbag’s flyout is reduced to a certain limit so that at least some part of the displaced air can be released through the cabin leaks. The second, quite effective method is the use of airbags of relatively small volume. But in some cases, problems with eardrums and contusion can’t be avoided, it all depends on individual characteristics of a person and the size of a car.

By the way, the first airbags appeared not on Mercedes-Benz cars, as many believe, but on “Americans”. In the mid-70s, Ford and General Motors built more than 12 thousand cars equipped with airbags. And the Americans made airbags that replaced seat belts then. But the airbag, while opening, “flies” towards a person at a speed of 270-300 km/h… And if he is not fastened, the damage it can cause is simply huge. Cases of the cervical vertebrae fractures, the cause of which was precisely the airbag, have been recorded more than once. So the Americans refused to use seat belt replacement airbags.

The engineers of the Mercedes-Benz passive safety department revived airbags. And we must say, they, not without the participation of Bosch specialists, were among the first to get airbags into shape. The path was difficult and thorny, but it was Mercedes-Benz that took airbags to the assembly line in 1980 and began to equip its S-Class with them. They realized that airbags should be made so that they work in tandem with seat belts, and not replace them. And then everything fell into place, airbags began to work with amazing efficiency. By the way, so far airbags simply won’t work in many cars if a person is not fastened – it’s dangerous!

Despite the big breakthrough in the field of “inflatable” protection, we can’t say that airbags are at their height. In the near future, airbags will be endowed with the ability to open not after the accident, but moments before it, then the air hammer will be somewhat softer. Now electronics can detect a passenger in a seat, but developers plan to teach the safety system to recognize the individual data of a person (weight, height) who is sitting in a seat at the time of an accident. That’s when the airbag will be able to work as efficiently as possible.

Systems of “inflatable” protection have long been not limited to frontal airbags. Designers have developed similar systems to protect a person during a side impact. The basic equipment of many modern cars already includes side airbags mounted in backs of front seats, as well as inflatable “curtains” that are placed in roof hips. The first protect the passenger’s body during a side impact, and the second – the head. Unlike front airbags, which are deflated almost immediately after actuation, curtains can maintain pressure for several seconds, that is, until the dangerous situation passes. And when the car overturns, they won’t allow unbraced passengers to fall out of the cabin. 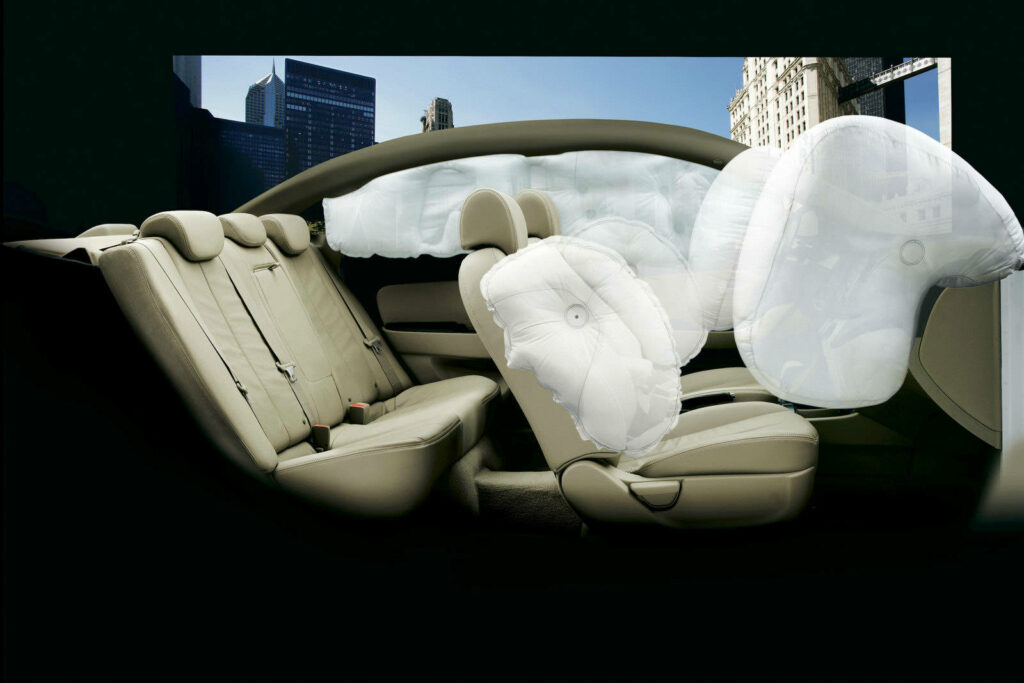 It is often suggested to equip a car with additional airbags to protect knees and feet. Many manufacturers equip their cars with airbags for rear passengers as well. But no matter how ultramodern and smart the electronics on your car are, don’t forget to fasten your seat belt during a trip. After all, by developing all these ultramodern means of protection, engineers of companies proceed from one postulate – the driver and passengers are fastened with a seat belt. And if they are not, there won’t be much use from all these things.

Please type your email in the field below and click "Subscribe"
October 25, 2019 Ford: how it all started