The Mini car was produced only for 42 years, but it’s ranked as the world’s most reliable car (it rarely breaks down). This brand was born in the UK and is still in demand by car owners. Do you want to know why the legendary Mini car reached the 20th century best cars top and took second place there, behind only the Ford Model T? Then make yourself comfortable: the small car has a long history and millions of fans.

A little goes a long way: what is the secret of the Mini’s charisma?

There is no continent today where the tiny British model doesn’t drive. It is already the seventh decade since a small car successfully masters roads in various parts of the world. The small car has surprisingly easily fit into the autobahns of Germany, and the highways of America, as well as the freeways crossing Australia, and even African bad roads. After all, there are drivers everywhere whose desire to save fuel while driving is not just a whim, but a necessity. In addition, the Mini is surprisingly roomy – in its interior, you don’t feel crampedness or other discomfort inherent in other little tiny cars. Thus, there are elegance and economy in a minimum of space. It‘s noteworthy that the Mini was also driven by racers, rock stars, famous actors, and sportsmen – no one could resist the stylish legend. Jean-Paul Belmondo, members of the Beatles, representatives of Royal European families, Charles Aznavour and many other famous people were among those who drove cars of this brand. Even mini-skirts began to be produced in honor of this model.

The car’s amazing popularity increased after this model was filmed in The Italian Job movie. Even Enzo Ferrari had three Mini cars in his garage! By the end of the century, the little car had become a symbol of time and a real piece of art. Today, the Mini is becoming the standard of style and extreme charm in the automotive world, combining classic and modern design. And all this despite the difficult history of the auto brand.

How the idea raised: the birth of the Mini

The small car has experienced everything: there were ups and downs in popularity and demand, changes of brand owners, transformations of the name image options, logo modifications, etc. It all started with the decision of Leonard Lord to merge the automobile company Morris Motors and the carmaker Austin Motor Company. As a result of the merger of these companies, a new automobile production, the British Motor Corporation (BMC), was formed. This happened in 1952. Lord, as president of the BMC, was concerned about the need to create minicars with super-economical gas consumption. After all, in the second half of the 1950s, there were interruptions in oil supplies from the Middle East (the Suez Crisis). Even in the UK, car owners received a strictly limited amount of gasoline. Leonard Lord invited Alec Issigonis, a Greek with an engineering and design background, to join the combined firm as chief designer. The latter headed a working group of eight people (two designers, two engineering students and four draftsmen). At first, the group’s goal was to develop a completely new line of cars that could meet the needs of a wide variety of segments of the population. The first three models had to be called very simply – the Maxi, the Midi, and the Mini. But the gasoline shortage buried the first two projects, and work continued only in the direction of creating the smallest car. The management made it clear to Issigonis that he had power to do anything he wanted, without going beyond the dimensions of 3 x 1.2 x 1.2 meters, but at the same time it should have been comfortable inside for four adults – three passengers and one driver. Alec Issigonis was not just meticulous and thorough in his work. His scrupulousness and dedication to the task were fantastic. Not only working, but also personal time was considered as an opportunity to turn another design idea into reality. So, having lunch in a cafe, Issigonis managed to sketch a car directly on a napkin, and attracted everyone who came to hand – security guards, mechanics, secretaries – to test the prototype. This meticulousness, combined with engineering savvy, was more than justified – in 1957, the first Mini prototype was almost ready. In it, 80% of the body volume was allocated for the interior, and the remaining fifth part – for the engine compartment. The inline four-cylinder engine was arranged across and equipped with water cooling and front-wheel drive. The wheels were 10-inch. At the bottom of the doors there was a bin to carry a bottle of Gordon’s Gin. The first prototype was named the Orange Box for its orange color. 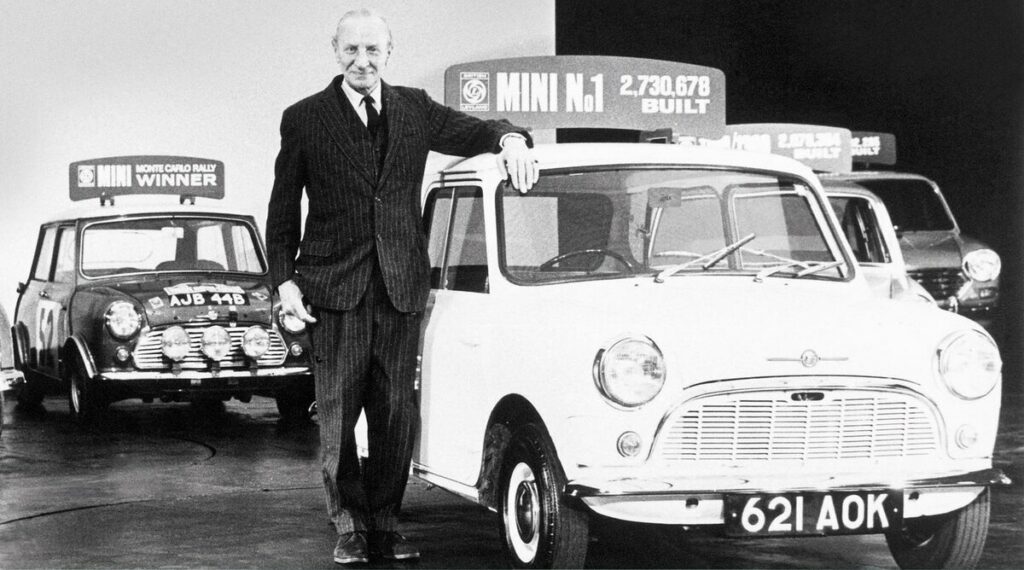 However, it took the British Motor Corporation another two years and 10 million pounds of investment, which was a huge amount for the late 50s, to start mass production. But the prospects were even greater. The president of the BMC, Leonard Lord, understood them like no other, and therefore didn’t skimp on expenses. The advertising campaign led to the fact that after the official start of sales of the Mini car brand in a hundred countries on August 26, 1959, several thousand cars were sold out instantly. Two powerful assembly lines could hardly increase production, and by the end of 1959, another 20 thousand cars were sold. In the following year, 1960, they had to produce three thousand cars a week. In the UK, the creation of Alec Issigonis was sold under the names Morris Mini Minor and Austin Seven, and outside the Kingdom – Morris 850 and Austin 850 (the last figure symbolized a rounded engine displacement). The cars were assembled at two factories: in Cowley (Oxford) under the name Morris Mini Minor and in Longbridge (Birmingham) under the name Austin Seven. The creator of the brand was awarded a knighthood, although the Mini was the last car of Issigonis.

Triumph of the minicar: step by step

We can’t say that the Mini was perfect. Of course, there were plenty of working shortcomings, and some of them were revealed after actual operation. For example, getting into the rain manifested disgusting waterproofing of the interior (or rather, its complete absence) – numerous cracks didn’t prevent the penetration of water inside, and the bottom of the car was a tray for puddles. However, the identified shortcomings were eliminated by the BMC’s design team very quickly – success should have been developed, and reputation – maintained.

Then, in September 1960, the Morris Mini Traveller station wagon, aka the Austin Seven Countryman, appeared on the roads of the world. A couple of years later, legendary designer John Cooper joined the work on improving the Mini. He added disk brakes to the front wheels, increased the engine’s power to 55 hp, and its volume to a liter. The result of Cooper’s efforts was an excellent racing car, a sports modification of the subcompact, which at first was not taken seriously by anyone – neither competitors-rivals on rally tracks, nor the BMC’s management. But the racing version turned out to be manageable, compact and maneuverable, and for four years (from 1964 to 1967) the Mini Cooper smashed everyone in the most difficult Monte Carlo rally. After victories at the races, those who wanted to buy a charming minicar began to line up. Sales skyrocketed, and the BMC’s profits were mind-blowing. In 1961, stylish cars, convenient to park, literally flooded London. The Mini contributed to the mobility of the population. Moreover, in those years it was the best car to go anywhere – a back door, a roomy trunk, folding seats – everything was made by designers for travelers spending their holidays on the road.

In 1968, the Mini’s production completely moved to Longbridge. In the late 1960s, the carmaker took over Jaguar and became known as British Motor Holdings (ВМН). In addition, they realized that it was impossible to produce cars under different brands. Therefore, regardless of the manufacturer factory, all cars of the automobile holding were called the Mini.

Over the next twenty years, the subcompact’s production steadily expanded, and demand increased. In 1969, the first ever special version of the Mini Limited Edition 1000 was presented to the public. Special and limited versions differed from the basic ones in appearance and trim. However, sometimes they also included technical improvements. In the same year, 1969, three new models appeared: the Mini Clubman, the Mini Clubman Estate and the Mini 1275 GT – that is, both cars for professional sports and the “roomy” Mini were in the line.

The BMC sold the right to produce the Mini first to British Leyland, then this brand was bought by the Rover Group (since 1969 – British Leyland Motor Corporation), and in 1994 it was acquired by the Bavarian company BMW. But the latter decided to make the brand an independent subsidiary with its own production facilities and big plans for the future. To bid a fitting farewell to the legend, BMW updated the Oxford factory, released four special modifications of the subcompact, and introduced a new vision of the MINI. This is how the brand name is now written, in large letters, so as not to confuse novelty cars with classics. The updated MINI brand not only follows the passage of time, but also, as always, shapes it.

In 1995, the little miracle Mini was named the best car of the century by readers of Autocar, the most authoritative British magazine about cars. Four years later, at the automobile awards ceremony in Las Vegas, it was recognized as “European car of the century”.

Frank Stephenson, a talented designer with a very unconventional thinking, was the creator of the modern MINI. His main achievement, perhaps, was the fact that Frank managed to change almost everything in the minicar, but everything remained as before. In 2007, the MINI Countryman debuted, which became the company’s first all-wheel drive car and the largest MINI in history, and the MINI Clubman also rolled off an assembly line with an extended base and an original way of door opening.

In 2012, the third generation of the MINI was presented to the public: now, in addition to the classic three-door model, a five-door hatchback was also available. This MINI had more space inside, this version is a favorite among buyers to this day.

The new company logo was born in 2015. The three-dimensional logo has become two-dimensional and as graphic as possible: it shows a wheel and wings, and four capital letters MINI in the center. This design goes back to the early years of the classic MINI, but embodies the modern desire for laconicism.

The MINI Countryman Plug-In Hybrid version, which appeared on the world’s roads in 2017, has become a new level of automotive excellence.

In 2018, the fourth generation of the legendary MINI hatchbacks and convertibles appeared. The stylish Union Jack taillights highlighted technological and design ideas.

The company’s 60th anniversary was marked by the creation of a collection model – the exclusive MINI 60 Years Collection series, presented in the historic British Racing Green IV color with branded stripes on the hood.

In November 2019, the first production electric car of the MINI brand, the three-door electric hatchback Classic Mini Electric, a restored classic city car, was launched on the assembly line. 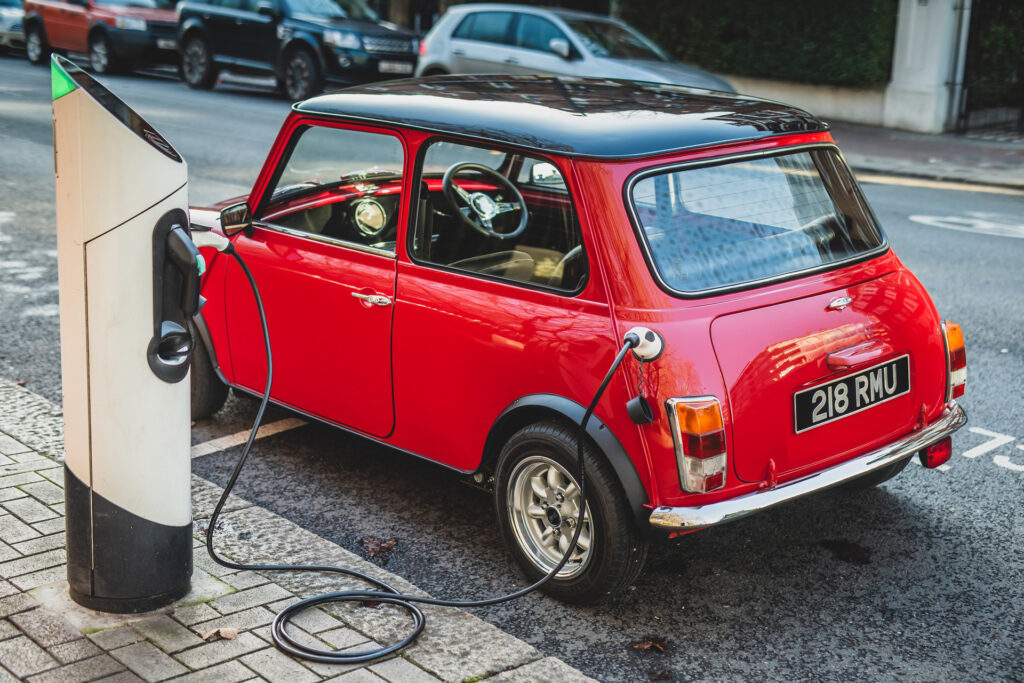 The big story of the small car continues…

But you can’t drive even a miniature car without a driver’s license! We invite you to quickly and easily process an international driver’s license on our website. It won’t take you much time and effort, but this document is useful when driving not only a MINI.

Please type your email in the field below and click "Subscribe"
December 17, 2020 Main directions of car body tuning