In 1903-1905, the American inventor Charles Knight built and tested an experimental four-stroke internal combustion engine, in which the responsibility for gas distribution fell not on the valves, but on a concentric pair of movable sleeves embedded in the working cylinder. And a working piston moved inside this pair of sleeves. Each sleeve was equipped with large windows on one side. When the sleeve moved up and down, these cutouts periodically coincided with inlet or outlet windows in the sidewall of the cylinder. The sleeves were driven by a crank mechanism and a gas distribution eccentric shaft, which replaced a camshaft.

At the 1906 Chicago Auto Show, Knight and his business partner, Lyman Kilbourne, presented the Silent Knight car with a four-cylinder 40-horsepower valveless engine. In accordance with the name, the main advantage of the newcomer, in comparison with the then-existing horseless carriages, was an incomparably lower noise level. That car didn’t initially attract much interest of buyers, but it immediately aroused great interest in the industry itself and in the following years gave rise to a wave of imitations on both sides of the Atlantic, a wave that subsided only after the Second World War.

Different variations of engines with a slide-sleeve distribution began to be designed and built not only in the United States, but also in Europe, mainly in the United Kingdom and France. Such engines were created by companies under the license of Knight and often with his direct participation (at the end of the first decade of the 20th century, the inventor worked for several years in Europe, and then returned to his homeland).

In different years, passenger cars of Daimler, Willys, Mercedes, Peugeot, Voisin, Panhard-Levassor and several other brands were equipped with sleeve gas distribution engines. At the same time, Knight’s idea developed, and the mechanism was improved. So, in the engines of the Scottish company Argyll, the original version of the valveless distribution with a single movable sleeve was used, which, when passing the working cycles, simultaneously shifted up and down and made an incomplete turn around the longitudinal axis. Thanks to that, it alone could be responsible for both the inlet and the exhaust.

Knight engines had a number of advantages over four-stroke internal combustion engines with traditional valves. The valveless engines had very large inlet and outlet windows which improved gas exchange. Such mechanisms weren’t afraid of high crankshaft speed, while the valves in a similar situation required more and more strong springs, which increased the drive friction losses. Together, all these features made it possible to get high power on Knight engines at that time. In addition, at the beginning of the 20th century, in the 1920s and even in the 1930s, Knight’s gas distribution mechanisms were many times more durable than valve ones. 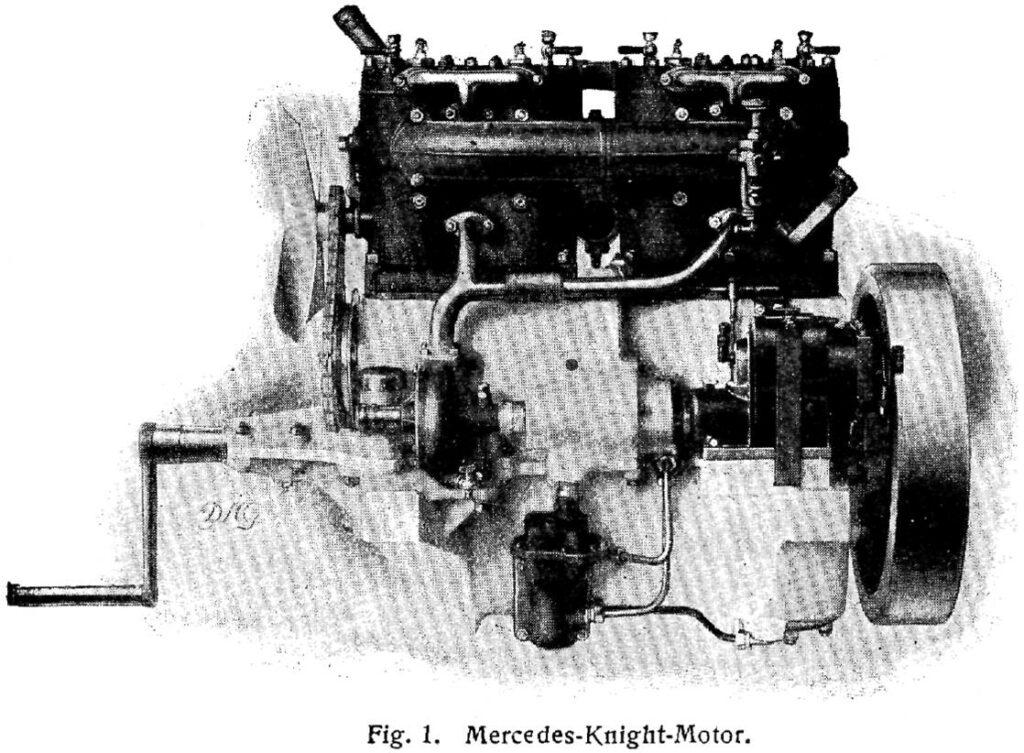 However, conventional gas distribution systems were rapidly improving, but Knight’s scheme couldn’t get rid of its inherent shortcomings. Among them: problems with ensuring the tightness of the cylinders, problems with the running-in of the inner sleeve and piston rings, problems with the supply of grease to all parts and actually very high oil consumption. These weaknesses forced Knight engines to withdraw from the mass scene, although throughout the twentieth century, individual inventors continued trying to improve such a scheme. But it didn’t go beyond the production of all sorts of exotic things like tiny motors for aircraft models.