As soon as you say the word “Toyota”, an image of a magnificent representative of the automotive industry of Japanese origin immediately arises. But the Toyota family recently acquired a luxury minivan called Alphard. In this article, we will tell you what this car is and whether it has competitors.

How did the minivan get its name?

The five-door minivan, manufactured by Toyota Motor Corporation since May 2002, was named after the bright star Alphard in the constellation of Hydra (Alpha Hydrae). It has three rows of seats and the most spacious interior among Japanese cars. In addition, the car has a design of irresistible expressiveness combined with high-comfort seats and excellent quality trim (perforated leather). The refined luxury of the interior is complemented by excellent exterior design characteristics. All of the above gave the creators of the Toyota Alphard the right to give the car the name of the star which is forty times brighter than the Sun. It is almost 180 light years away. This means that we see the star Alphard as it was in the time of Pushkin and Lermontov. Hydra has a very ancient origin. For the ancient Greeks, the constellation symbolized the Lernaean Hydra, a giant water snake with a poisonous breath, which was killed by Hercules, thus performing one of the twelve labors. In the sky, Hydra is a meandering chain of stars, skirting the constellations of Sextans, Corvus, and Crater from the South. In this chain, Alphard plays the role of the heart of Hydra. This name – the Heart of Hydra – was given to the star by Tycho Brahe, the greatest astronomer of the pretelescopic era. By the way, in translation from Arabic, “al-fard” means “the solitary one”. There are really no bright fellows around this star. Therefore, for the car of this level, its Japanese creators chose such an unusual name. The association quite definitely hints that it’s not worth looking for anything better in the minivan market.

The main features of the Toyota Alphard’s exterior design

A stunningly dynamic silhouette is a characteristic feature of premium cars, and the Japanese minivan named after the solitary star is no exception. It looks not just cool, but impressively stylish. The wheel arches have an accent of expressive shape, the radiator has a grille that looks sophisticated and imposing. Both the rear lights and the head fog lights are quite large. At the rear, the constructional solutions of the car builders provide a fog lamp and a spoiler that masks a windshield wiper. The Alphard wheels are equipped with 16-inch discs, which include a light alloy. The doors of the minivan are safety, with the easy closer system that makes it easier to close them. By the way, you can open and close the doors using a remote control. Doors of the Toyota Alphard can be both sliding and swinging. For the first time in the history of Japanese cars, it was on Alphard that the power drive of the rear door was installed. For the convenience of passengers, there are side steps for loading both into the cabin of the minivan and into the interior. Also, the opening of the Toyota Alphard’s doors can be controlled from the interior using the Smart Entry key fob and buttons on the roof console. 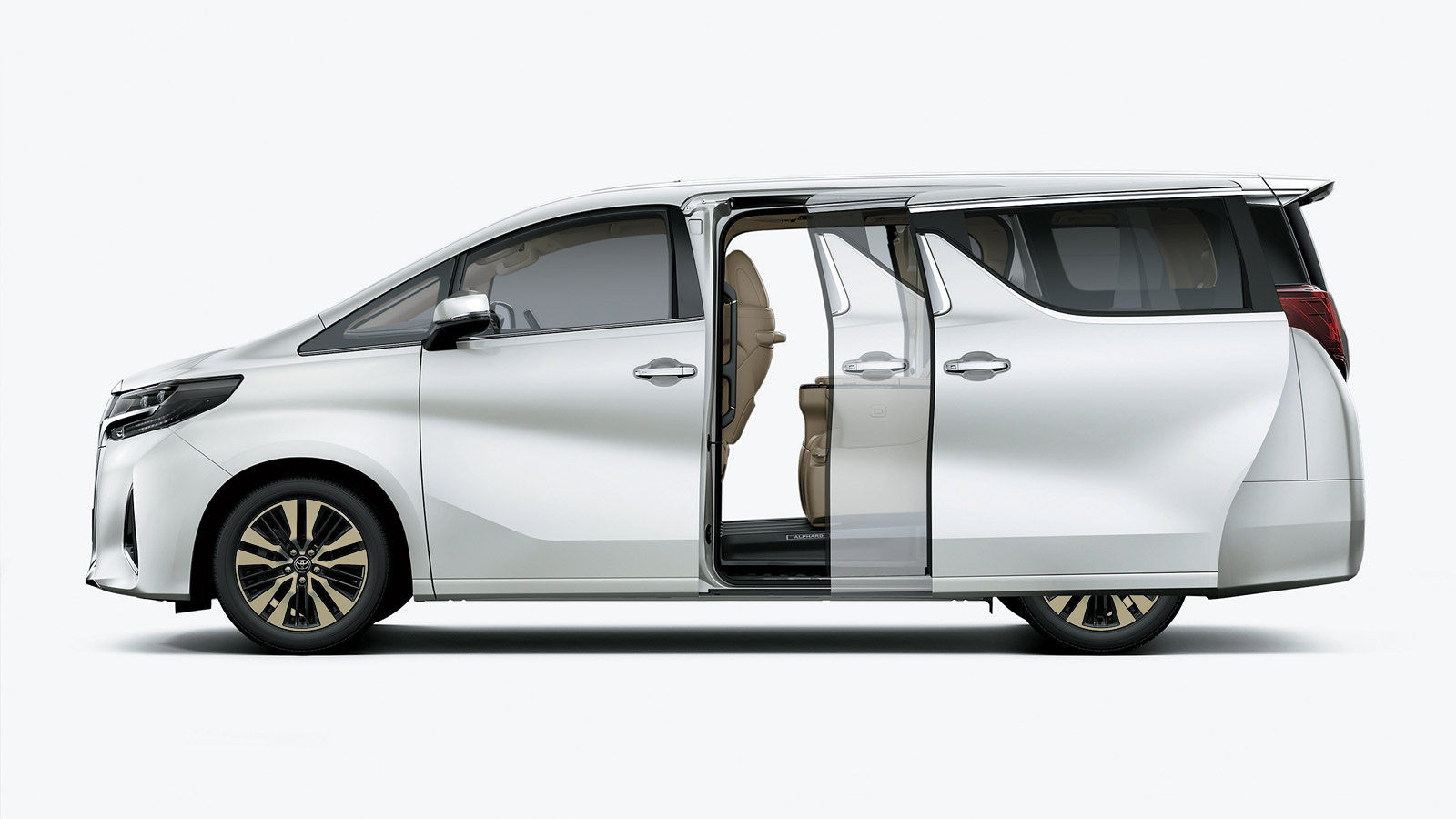 Comfort and refined luxury of the Toyota Alphard’s interior

The interior of the star “Japanese” provides everything so that even in conditions of a long trip, passengers don’t need anything. Of course, within the limits that are assumed by the status of a premium car. The Alphard’s interior can comfortably accommodate seven passengers. The front passenger’s leather OTTOMAN seat and the second-row captain’s OTTOMAN chairs are equipped with electrically operated shin support. For second-row passengers, it is possible to electrically adjust the seats in 4-6 directions with the possibility of fixing the back in a horizontal position, as well as spacious foot pads and large adjustable headrests. 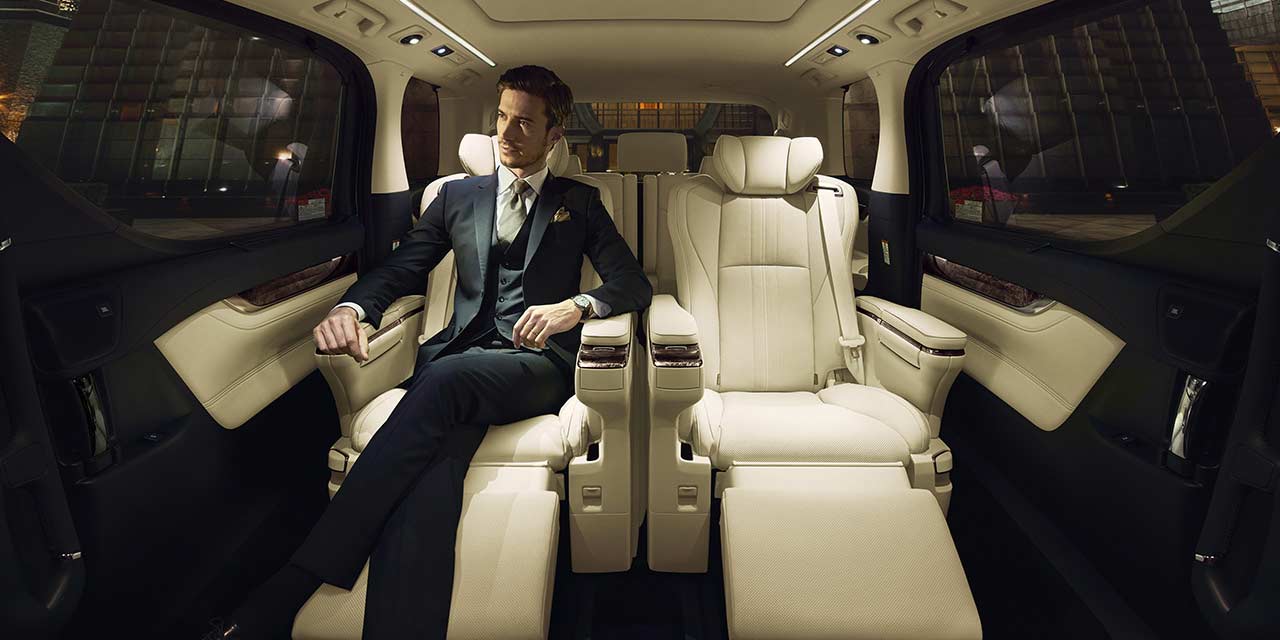 Additional comfort features include the nanoe air ionizer, that is, a thing that can keep the air in the cabin clean and eliminate unpleasant odors. There is also an independent climate control for the driver, front passenger and second-row passengers. On the roof console, there is a 9-inch LCD-monitor with a remote control and the ability to play CD/DVD discs. A sound actuator (a small electronic resonator the size of a hockey puck) guarantees an even distribution of sound throughout the cabin and acoustic comfort for each of the seven passengers. The premium atmosphere in the Toyota Alphard’s cabin is highlighted by the LED backlight, which allows you to increase and decrease the brightness of the light, as well as change the tone of the lighting.  Numerous comfort features combined with a large number of compartments for storing small items, wide individual armrests and vast space in the area of knees and heads of passengers allow you to call the Toyota Alphard’s interior superior in terms of comfort and quality of personal space to premium sedans.

Conceptual foundations of the security paradigm

The Toyota Alphard is equipped with a wide range of active and passive safety systems, including ABS, EBD, BAS, TRC, VSC, and active front seat headrests. The main task of the latter is to provide support to your head as quickly as possible, negating possible injuries to the neck and spine. According to their construction, active headrests are of two types: mechanical and electric. Mechanical ones are quite simple. A lever connected to the headrest is built inside the seat. In an accident, a person is pushed into the seat, and he presses the lever with his back, after which the headrest begins to move towards the head. When the pressure on the seat back decreases, a spring returns it to its place. The greater the force of the impact and the greater the pressure exerted by the person’s back on the seat, the faster the system will work. Electric ones require impact sensors, a system control unit, and a lever mechanism that drives the headrest. The basis of the lever mechanism is a squib. The impact sensors are located in the rear of the car. Signals from them are sent to the control unit, which, in turn, regulates the operating force of the lever mechanism, based on the force and direction of the impact. Even the simplest active headrests significantly increase the overall level of passive vehicle safety. A big advantage of active headrests is that they don’t need to be constantly adjusted, unlike fixed counterparts that need careful adjustment in height. Active ones are designed for standard dimensions of a person and need to be adjusted in height only if a well-fed person of a low stature or, conversely, a thin and tall person sinks into the seat.

Seven airbags, including front, front side ones, curtain airbags for three rows of seats and a knee airbag for the driver, guarantee a high level of safety for all passengers of this Japanese car. This “immodesty” provides confidence that the driving on motorways will pass without much damage to the health of both the driver and the occupants of the passenger cabin of the Alphard. 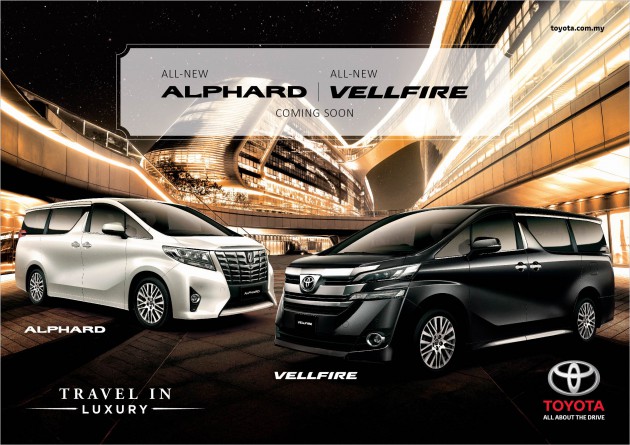 The Toyota Alphard is a luxury in its purest form, it is a pleasure to drive this car (very beautiful, comfortable, modern, rich and expensive). But you shouldn’t forget that even in it the driver must have documents, and the main one is a driver’s license. An international driving license can be processed on our website – quickly and easily. Spare a couple of minutes, and the driving of the luxury Japanese car will be possible in any part of the world – with the international driver’s license. 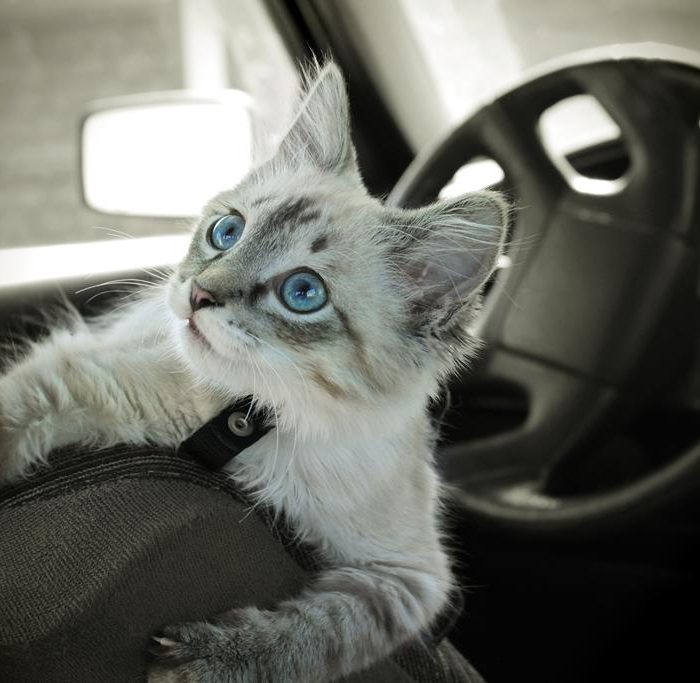 October 16, 2017 What foreign nationals need to know about driving in the UK? 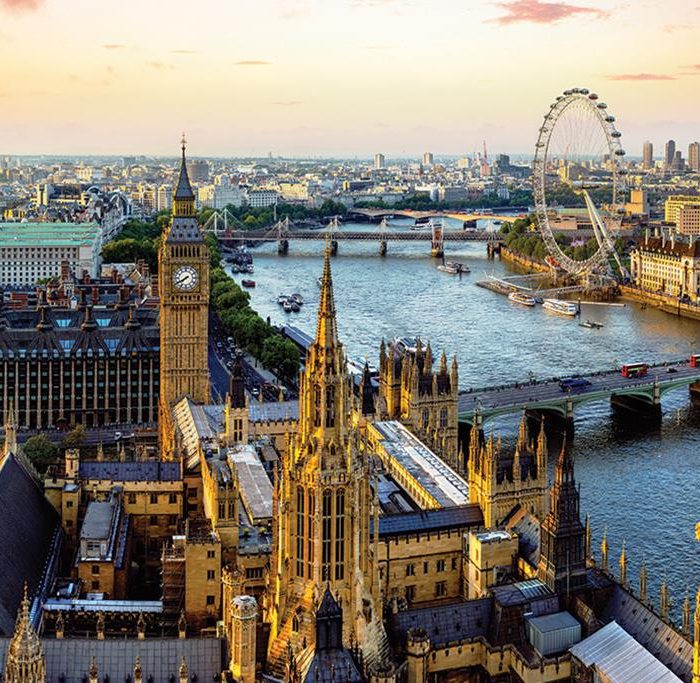 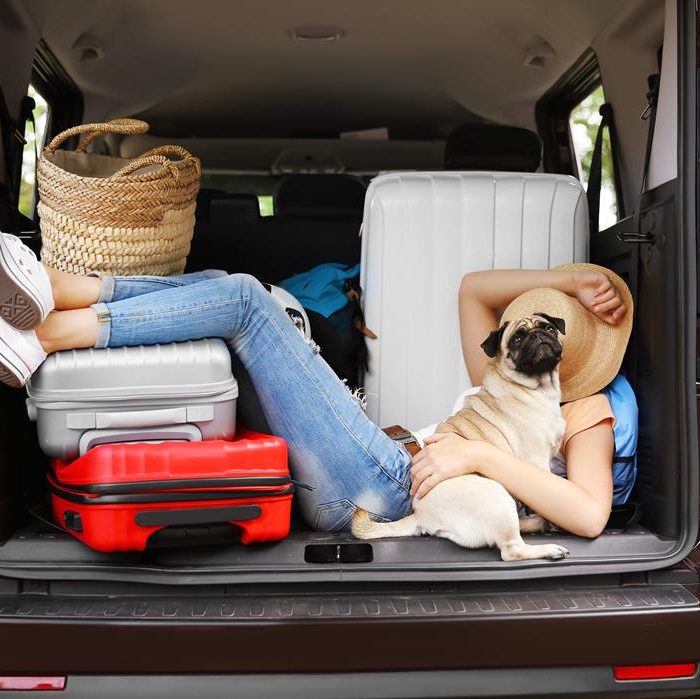