The updated 2017 Range Rover Sport isn’t a new product in itself. But it was one of the first to get the Ingenium 3.0 inline turbodiesel. And it’s for the sake of the iconic engine that we are doing this work. Another thread linking Land Rover with the past has been broken: an engine of their own design has replaced the well-deserved Ford V6 and V8 units.

We chose one of the best modern heavy fuel engines, B57D30, as a competitor. Fortunately, it operates in conjunction with the same eight-speed automatic ZF 8HP76. And the BMW X5 xDrive30d acts as a power unit carrier, with which the Range Rover Sport hasn’t yet competed during our tests.

There is no discrimination in the boost options: 249 hp, 300 hp, and 350 hp engines are presented. We got the optimal D250 for the test — 250 hp and 600 N-m. This car is not from the press fleet, and therefore allows us to try out the Sport not overfilled with equipment. For example, we saw a Range Rover without Sport driving mode for the first time.

The Land Rover motor is quiet. At idle, you can hardly hear it outside, and don’t hear it at all in the cabin. There are no vibrations on the controls, on the floor, or on the seats. The twin-turbo six-cylinder engine, which disappeared from the line, didn’t work so intelligently. But with the same output, it was relatively easy for it to carry not only the Sport, but also the larger flagship Range Rover. And what about Ingenium?

I pressed both pedals, released the brake a moment later.. The aluminum SUV, which sat on the rear axle, speeded off. However, when shifting from second gear to third, it seemed to have bumped into an invisible wall – the gear switching was so long. Impartial Racelogic recorded acceleration to 62 miles/h in 8.5 seconds. The manufacturer promises the same figure, but the Sport with the previous V6 engine of the same power did it in 7.9 s.

The BMW’s diesel rumbles louder and has more vibrations, but this is the only thing in which it is inferior to the opponent. The standing start, backed up by the launch control and accompanied by a brutal sound, impressed us after the Range. Acceleration to 62 miles/h requires two striking shifts and only 6.8 s. Even though the main gear of the X is longer. The same result is registered in the vehicle certificate. The X5 xDrive30d is nominally one tenth faster than the Range Rover Sport D350. 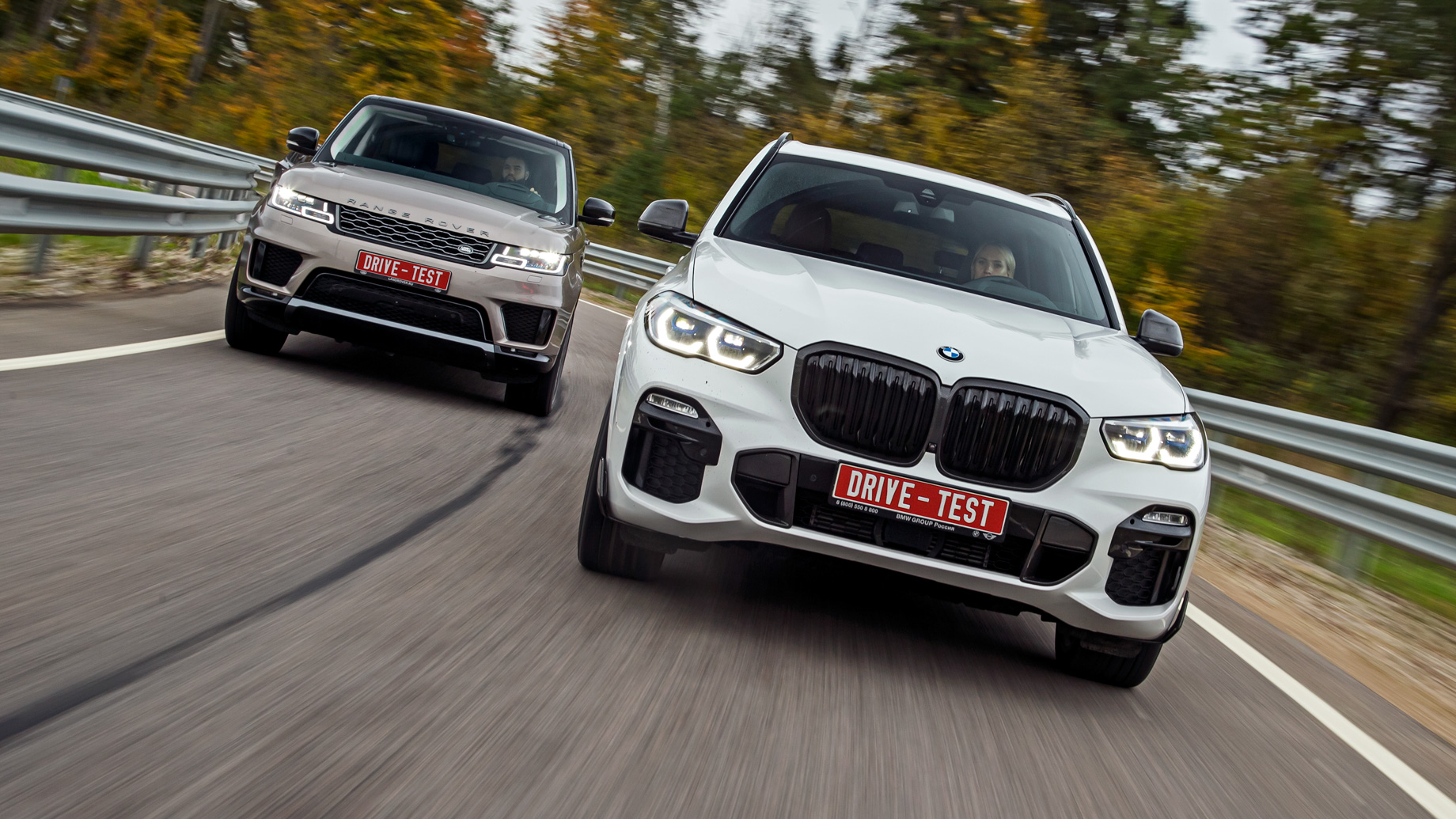 In every road situation, the BMW is faster than the Range Rover. The Bavarians’ program for controlling the same automatic transmission is clearly more successful. Regardless of the traffic congestion, the BMW reacts faster to the fuel supply in any engine mode, except for lifeless Eco Pro. The Sport makes the reaction to the gas pedal stroke exemplary. The car is so lively and nimble that it looks more like a hot hatch than a family crossover weighing 2.2 tons.

The impression of the Range, which is slightly heavier, depends on the traffic: the denser it is, the less clearly traction control is. The most difficult thing is in traffic jams, where there is no clear connection on the accelerator at all. Only the starting moment is cracking, and then the Sport doesn’t give adequate acceleration in response to minor pedal movements. It always reacts after a perceptible pause – and gives more speed than you ask for.

While you are moving in dense traffic, the automatic gearbox doesn’t keep up with your wishes: it shifts at random, then stays in the current gear for a long time. When there is a place to maneuver, you can call upon the assistance of the sport gearbox mode. The heavy Sport becomes more obedient, reacts more sensitively to the fuel supply. Shifting one or two gears down is more logical here. The higher the speed, the more linear the responses to the fuel supply are.

The joy of mutual understanding doesn’t last long. After 75 miles/h, the Range Rover loses enthusiasm. Overtaking requires more preparation: it’s hard for the turbodiesel, the automatic transmission is also in no hurry to activate kickdown. The previous V6 engine allowed you to feel more confident even behind the wheel of the older Range, despite the similar behavior of the gearbox. See how interesting it is: on the one hand, the range where the maximum torque develops in the inline Ingenium is shifted lower in speed – from 1500-2500 rpm to 1250-2250. On the other hand, the peak power is observed at 4000 rpm, whereas previously there was a 3500-4250 rev range with maximum engine torque. 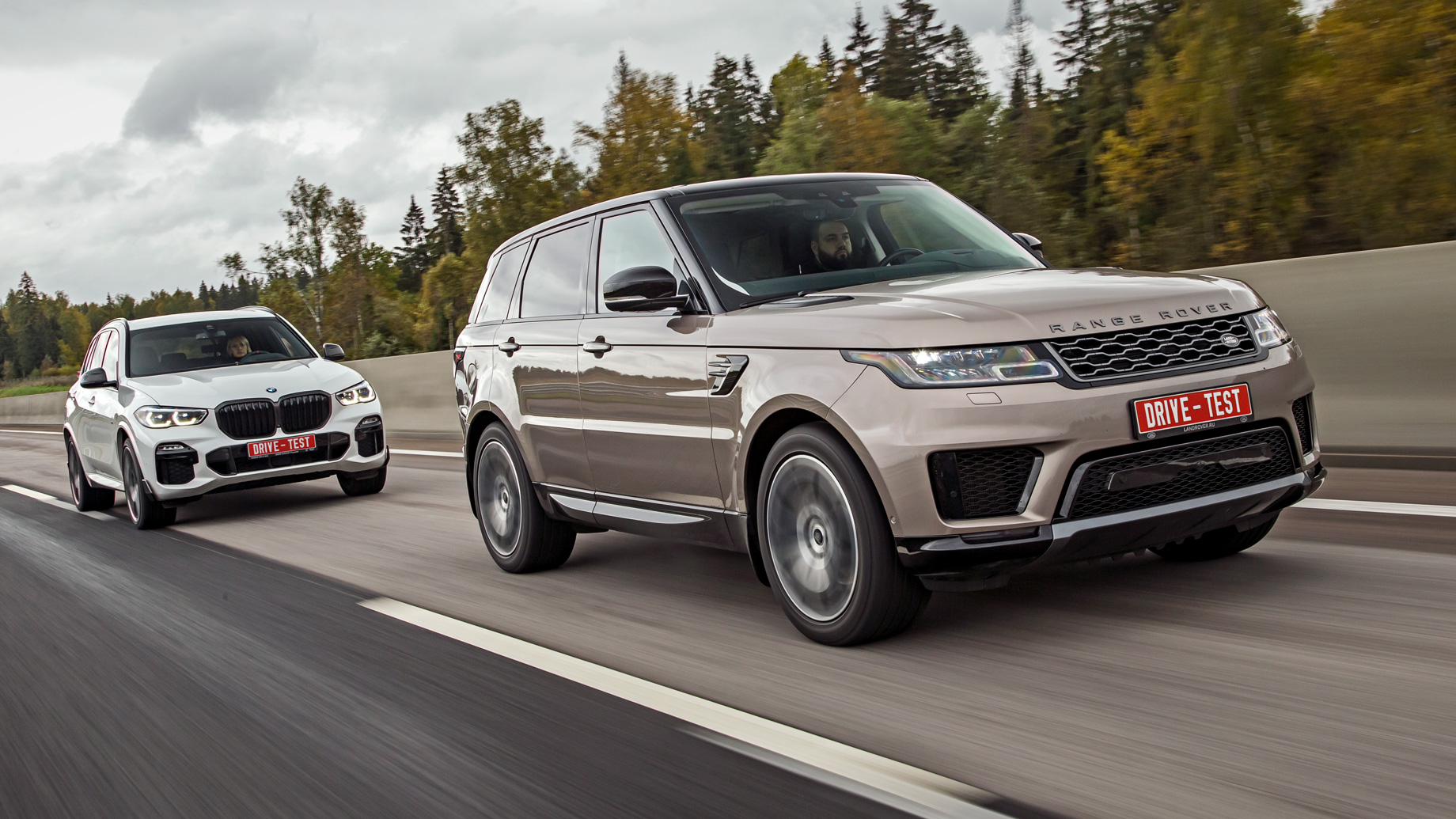 The BMW six-cylinder engine gives its maximum at the same four thousand rpm, and the range of drag link is formally even shorter – from 2000 rpm to 2500. However, on highways, the BMW simply devalues “Sport” in the Range’s name. Being behind the wheel of the X is just waiting for the moment to open out the throttle. It’s not necessary to put pressure on the floor – half as much force is enough. Moreover, the automatic copes perfectly without switching to Sport mode. The number of shifts is reduced with it and the engine is constantly on edge. At the same time, the X5 is also more economical, according to the results of the test.

The difference of “moods” can also be traced beyond the comparison of power units. The Range swaying on the air suspension is calm, even imposing. You push the hypertrophied diameter steering wheel away and the British ship first falls on its side, then runs command. The difference between Comfort and Automatic suspension modes is small. And let us remind you, there is no Sport one.

The X is focused and obedient. The BMW follows the overloaded and not the sharpest steering wheel unquestioningly. On a high-speed arc, the rim is filled with a rich force, while the wide Pirelli P Zero tires hold, and gets lighter as soon as they lose traction. You can adjust a trajectory with the steering wheel and gas pedal. When the pedal is released, the crossover rushes into the turn with a slight slip of the rear wheels. Indefatigable M-brakes with a perfect drive setup is a safety net.

The Range Rover is slower in driving turns, starts slipping earlier and rides at the limit only with the front out. The poor connection of the steering wheel with the wheels, the swing and not the grippiest brakes also don’t add confidence. In those places where turns change each other faster than the Sport manages to roll, you can race very fast, but this is against the nature of a SUV. Take away the racing ambitions, and it will present its best side. How luxuriously it rides on a flat road or a surface with rare flaws, almost completely erasing the micro profile!

These are also comfortable conditions for the BMW. Neither the M-package nor the colossal 22-inch diameter wheels with Run Flat tires spoil the noble gait. In Comfort mode, shock absorbers dissolve asphalt ripples well, perfectly smooth out the peaks of vertical accelerations from medium irregularities. The suspension doesn’t like joints and pits with sharp edges, the passage of which is accompanied by dense hits. On the country road, it constantly snaps rudely at compression and rebound. Here, the X has nothing to brag about, except the fact that its steering wheel has a good isolation from vibrations.

The Sport is smoother than the X5,  passes well over large potholes, solidly withstands speed bumps, better resists joints and expansion seams on overpasses. Deep corrugations respond with smaller impacts. The car also rushes along the intersection much more confidently. Even on a lousy earth road, you can keep high speed – a relatively long-stroke suspension effectively dampens vibrations and prevents breakdowns. The steering wheel is also well insulated.

All the more pity, for eight years, the Sport hasn’t got rid of the tapping in the front suspension. (This is not only its problem – the co-platform Range Rover L405 also rattles throughout the entire production period). The Sport has more vibrations from unsprung masses than the X5. The cabin creaks, which is especially noticeable against the background of excellent sound insulation of the engine compartment, doorways, and wheel arches. The BMW clearly has more noise from the engine and wheels. 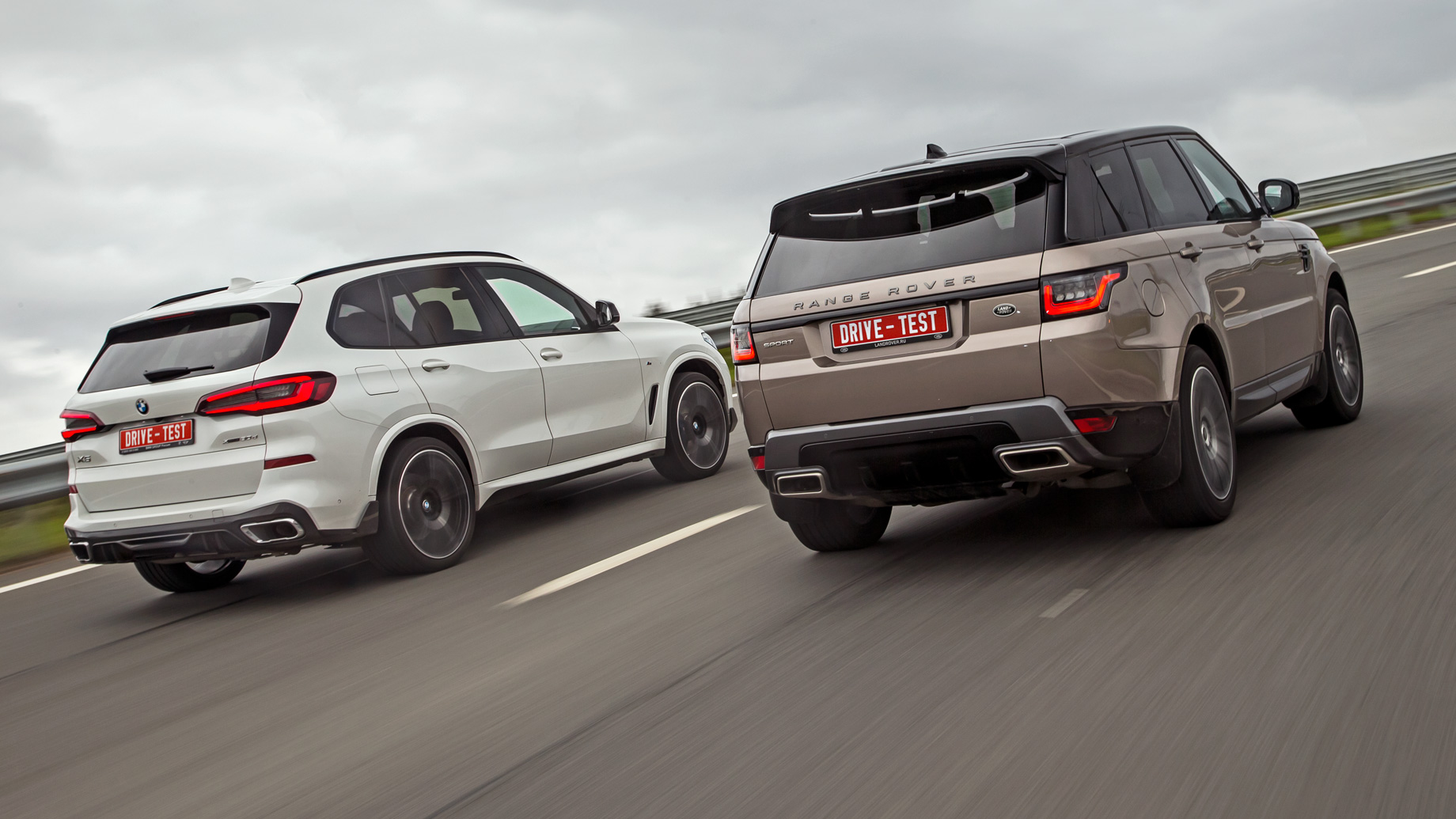 If we were to score, the X5 xDrive30d would have won by a significant margin. Even taking into account the fact that it is less prepared for off-road driving. The BMW has an amazing power unit and a well-balanced chassis for ordinary roads. The driver’s workplace is more convenient, the passenger compartment is more spacious. In addition, the BMW just makes you feel like being in a more modern, high-quality, technological car. It can do a lot and will please many. Sales speak for themselves.

By and large, the Range doesn’t have a leg to stand on. You don’t think that differential all-wheel drive with a low range plays a very important role in this segment, do you? The “Briton” is more comfortable on the move, but not so much to turn the advantage into a winning trump card. In his old age, the Sport has become less grumpy – this is, of course, a plus. But, alas, the new turbodiesel doesn’t stand up to comparison with the German one and doesn’t meet expectations, even being inferior in some ways to its predecessor.

This is a translation. You can read the original here: https://www.drive.ru/test-drive/bmw/landrover/618303a138daa9b8a91c335d.html

Please type your email in the field below and click "Subscribe"
May 31, 2019 Getting a driver's license in South Korea 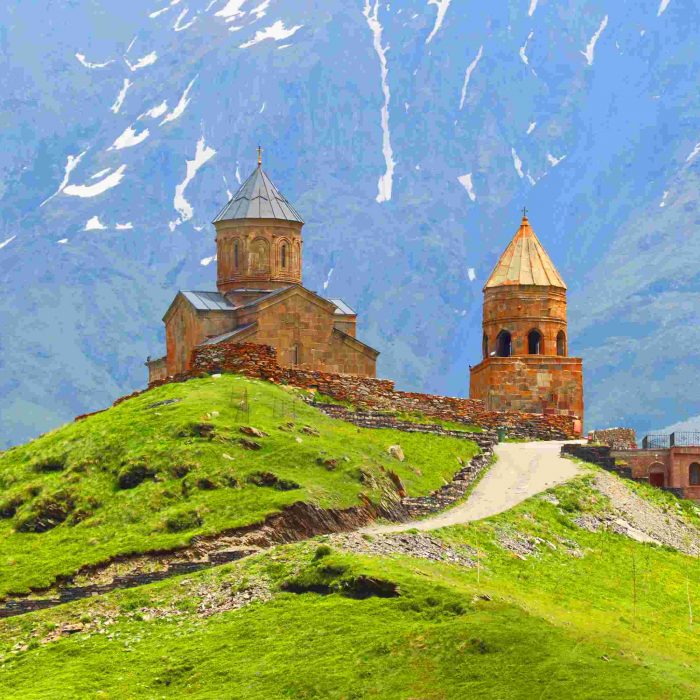