Getting acquainted with the Toyota Highlander and the Volkswagen Teramont

The Highlander is the most expensive among its kind. The price starts from $55,000, although opponents are cheaper by 4-11 thousands. No problem!  In the last difficult year, Toyota sold 264,128 Highlander cars. Did the love for the brand double the sales volume, or something else? We will find it out accompanied by the seven-seat all-wheel-drive Volkswagen Teramont. Over the past year, 162,437 cars of this model found their buyers.

The Highlander’s build quality is definitely not a point of pride of the American Princeton plant. The gaps are large between almost all the body panels. The ones in the joints of the trunk door, rear fenders and bumper strike the eye. And you can easily put a half of your forefinger between the hood and the LED headlight. Is it Toyota? Yes. Just look at this puffy appearance. 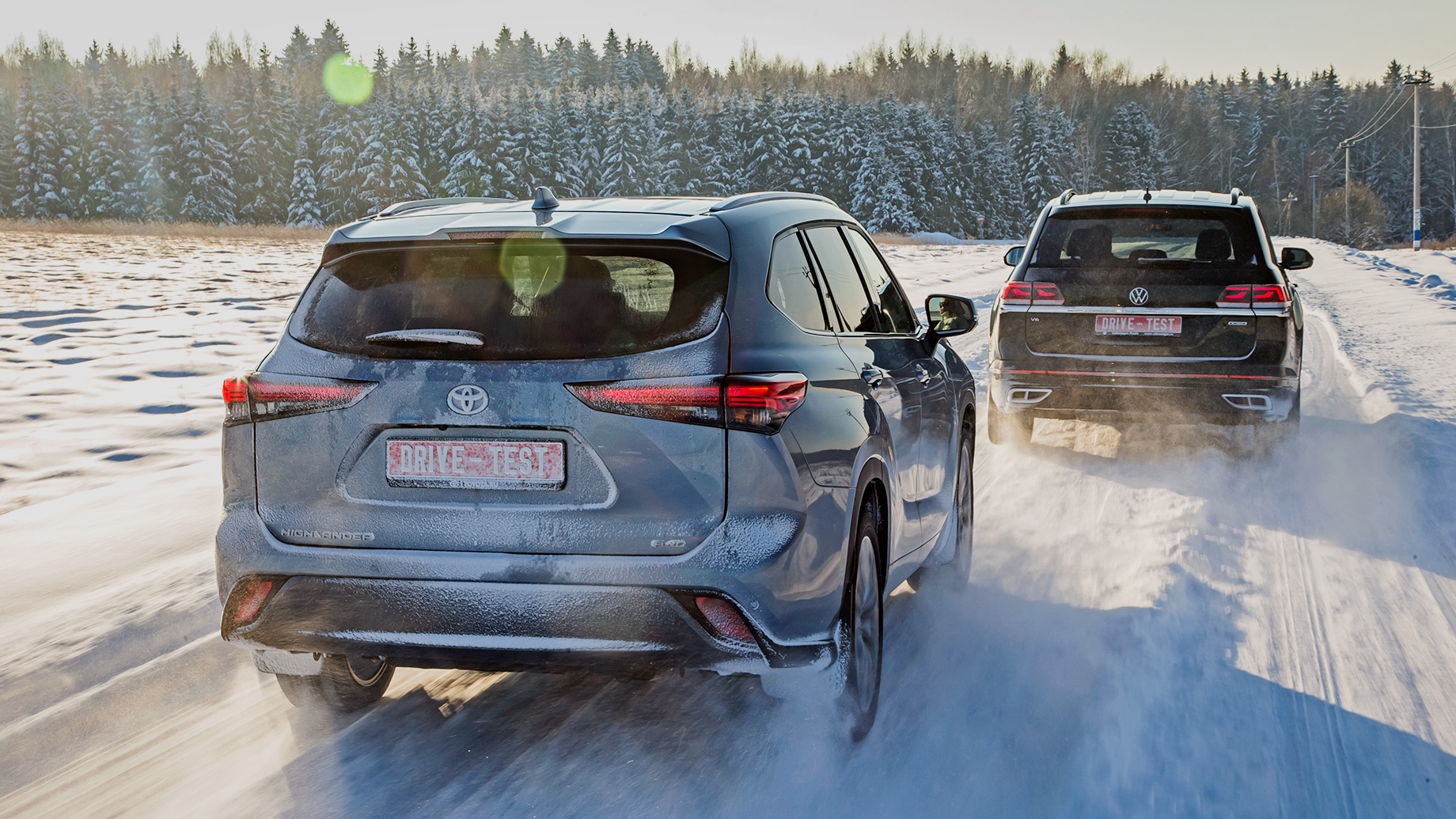 The Teramont is better assembled. The impression is different. The angular body with chrome inclusions looks as if it was carved from a piece of black marble. Brutality is given by the elements of the R-Line Sports package: a front bumper with enlarged air intakes, a pseudo diffuser and wide 21-inch wheels (the Toyota has 20-inch ones). However, the group of four exhaust branches turns out to be a cheap prop: chrome surround with no holes is laid along the bumper.

The front door openings of both crossovers are equally unobstructed. The low sills are always clean because they are tightly closed with doors. The types of fit are slightly different. Trying to maintain a balance between the urban and “captain” ones, the Japanese finally focused a little more on the second. In addition, the Highlander steering wheel is installed more gently, so you sit a little closer to it, and your legs are bent even harder.

A seat with a soft filler and widely separated pliable side support cushions relaxes you. Nice trim is also soothing — good-quality plastic, leather on door panels, stitching with real threads… They say, 50,000 dollars were not spent in vain. The generally cozy interior is spoiled only with a poor wood imitation and a scatter of cheap buttons that should have been left in the past a long time ago…

The Toyota lacks ergonomic snags, but there are enough minor flaws. We would like the steering wheel heating button to have a place on the climate control unit, and not to the left of the speaker surrounded by control keys for the all-round cameras and the electric trunk actuation. The central display doesn’t immediately respond to pressing, freezes when swiping and is located a little far from the driver.

With its finishing materials, the Teramont is close to the budget Polo, the amount of free space on the front row resembles the Multivan, and ergonomics is similar to all Volkswagens at once. There is a small claim only to the gear lever, which indistinctly switches from D to S mode. It has not the most modern multimedia, and the display resolution leaves much to be desired, but this infocomplex will easily give odds to Toyota’s archaic. However, both systems could faster establish communication with smartphones.

The Volkswagen keeps the driver up. The seat with dense padding and powerful growths of lateral support perfectly fixes the body, and the sporty steering wheel with thin spokes is set more vertically. The fighting mood is also supported by the landing geometry: in the seat you are located lower, the legs are extended more strongly. At the same time, do not forget that you are still sitting in a crossover.

The Teramont is longer than the Highlander, it has more distance between the axles. The doorway openings are so impressive that you can get inside of the car in pairs. The space on the back seat is king-size: behind the driver’s seat adjusted to my height of 5’09, I sit down with a 5.91 inches gap in front of my knees, and another 5.51 inches remains above my head. The Highlander leaves me 4.33 inches at the feet and 1.57 inches to the ceiling.

On the second row of the Volkswagen, it is more convenient to sit with three of us — there is more free space in width and for the legs of the average passenger. The range of longitudinal movement of the back seat is more impressive, and the adjustment of the angle of the backrest allows you to sit reclining. There are the benefits of civilization around: a separate climate control unit, heated seats, a pair of USB connectors and curtains on the windows.

However, the Highlander also has all of these, including the back of the second row reclining at a large angle. Although Toyota is closer, but on a long journey as a passenger, I would go by it. A cozy seat in a delicate leather cover over soft padding attracts. This is exactly what Teramont lacks, with the back seat comparable in rigidity to the front seats.

But I wouldn’t want to be in the third row of the Toyota even as part of a short trip. If it is still possible to free up extra space in front of your knees by sliding the second-row seat, then your head rests against the ceiling anyway. At the same time, you sit low, with excessively pursed legs. The Teramont back row is more favourable: it is easier to get there, the reserve of space is preserved in all directions, and it is more convenient to sit on less flat seats.

While we are jumping through the rows, atmospheric engines have time to warm up. They rustle quietly, don’t vibrate. Both V-shaped six cylinder engines produce 249 hp each, with a minimal torque advantage in favor of the Volkswagen of 360 N•m versus 356 for the Toyota. In the era of supercharging, these engines aren’t impressive, but the duties assigned to them perform well. They respond vividly to the fuel supply, pull solidly from 2500 rpm to the very red zone, and do not give up on country roads within the traffic regulations.

The Toyota’s peak of power and traction comes at higher revs, and it weighs nearly as much as the Teramont, yet the parallel launches reveal its total superiority. The difference is most noticeable when accelerating from a standstill, when the Highlander pulls ahead powerfully in the first couple of seconds and slowly builds up the advantage up to 80,8 mile/h. There is a little more modest capacity when accelerating on the move, but what about accelerating from 37.29 mile/h to 62.15 mile/h, that from 49.72 mile/h to 74.58 mile/h Toyota certainly leaves Volkswagen. Teramont remains to seize grief — its fuel consumption in similar conditions is 2–3.5 l/62.14 mile more.

Both cars are equipped with an eight-speed AGB Aisin AWF8F45. It is well-adjusted in both of them. Even in response to a slight pressure on the accelerator, it quickly shifts one gear down, and if you push it properly, it goes down without much delay, for example, from eighth to fourth. Therefore, in the Toyota you don’t even remember the absence of a separate sport mode, and in the Volkswagen you rarely use it. Although the ability to keep the current range longer is not superfluous.

For example, when you drive fast on a winding road. For a large car, this is rather an atypical situation, but the five-meter Volkswagen bears it. A fairly natural reactive action on the steering wheel is combined with moderate lurches and good tenacity in high-speed arcs. On the snow, Teramont with the Haldex V sticks in memory for predictable and exciting gliding. The setting of the brake pedal is a little out of the picture, whose stroke could be shorter. There are no questions for mechanical efficiency.

Suspension gurus made the Teramont almost the most daring in the class and… went home. Judging by the shaking, they never met again. Even average irregularities respond with sharp vertical accelerations, and on large potholes, the “German” shakes with its entire two-ton body. The body wobbles uncomfortably from side to side, straining passengers a lot, and vibrations from the wheels diverge across the floor. Only small road ripples don’t have the effect on the Volkswagen.

The Highlander is not so responsive and accurate in reactions, an unnatural effort on the steering wheel removes the car from the driver — and this state of affairs is fixed to be sure by a strict non-switchable stabilization system. Setting up an all-wheel drive transmission is boring, and too much force must be applied to the brake pedal. Therefore, the feeling of weak deceleration efficiency doesn’t leave, even in normal driving modes.

But the ride comfort is noticeably better on any bumps. Especially indicative is the road dotted with pits, where the Highlander seems less flabby and vibro-loaded from unsprung masses. Although a tight kick when driving through joints hints that when buying a Toyota it is better to choose 18-inch wheels.

The Highlander holds up better on a bumpy grader. It unworriedly rushes without breakdowns, demonstrating energy intensity and softness inaccessible to the Teramont. You only need to monitor the motion of the body, so as not to hit something hard with a power unit devoid of full-fledged metal protection. 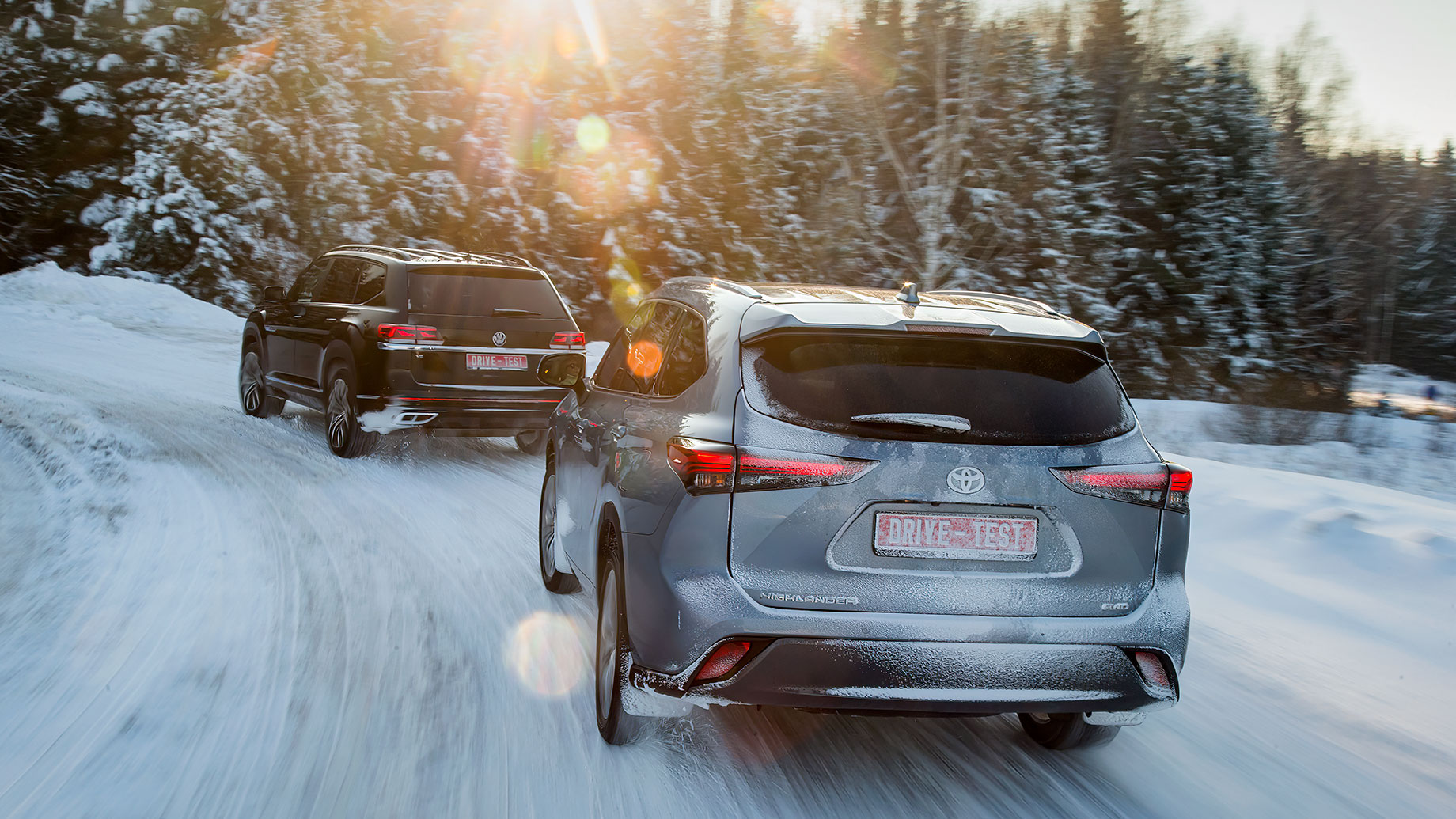 The Volkswagen has it. In addition, it has the best geometric cross-country ability and a better off-road assistant setting. While driving the Teramont, you don’t have to turn on the off-road setup to deal with cross-axling. The Toyota, without the support of the off-road mode, helplessly rotates the free wheels.

As a family car, the Highlander is more podded than the Teramont. It doesn’t dissolve into interesting handling, but offers better ride comfort, which is much more significant within the segment. The Toyota has a cozier interior, it is more dynamic and consumes less gasoline, which can be AI-92, while the Teramont needs AI-95. However, all the money saved on fuel will be dissolved in overpayment for the Toyota. Not sure if it’s worth it.

The test Teramont also doesn’t pull for the purchase of a century. It is gluttonous, the chassis is not balanced. But if you sacrifice the fashionable V6 in favor of a practical supercharged “four”, the crossover will become faster and more economical. Smaller wheels will add a little comfort and reduce the vibration background — this was exactly the case before restyling, which, alas, didn’t affect the suspension. A more spacious interior with a full third row, a hefty trunk and Toyota-like equipment at a lower price-point make the Teramont an attractive choice. It is not for nothing that a warm welcome was given to the Volkswagen upon its return.

This is a translation. You can read the original here: https://www.drive.ru/test-drive/toyota/volkswagen/61c1fda3eb24dd878b21eeb7.html