Checking updates of the Hyundai Solaris and the Skoda Rapid hits

This year, all the B segment bestsellers should be updated. So far, we have the Hyundai Solaris sedan and the Skoda Rapid liftback at our disposal. The first allows you to imagine what way the co-platform Rio will change, and the second is the forerunner of the substantially unified new Polo. The test cars are equipped with 1.6 naturally aspirated engines and six-speed automatic gearboxes; the prices differ slightly.

We select the most sophisticated equipment to evaluate the maximum of updates. In the case of Hyundai, this is the Prosafety special version; and Skoda is the Style version with a number of options. But in both cases, much of the additional equipment can be purchased for the mid configuration. The Skoda has a wider choice of options and is not limited to packages offered by Koreans without alternatives.

Both cars have become angrier and modern full-face, having acquired a similar “sharpness” of LED headlights — this is basic equipment for the Skoda and optional for the Hyundai. When viewed from the front, the Solaris looks more interesting thanks to the developed plastic of the bumper and the “3D” radiator grille which “swallowed” the license plate. From the back, it is difficult to distinguish it from the pre-reform model, whereas the Rapid with taillights extended on the trunk door became quite prettier. And again, the Skoda has rear optics diodes “in base”, and the Korean – so far only in the Prosafety version.

The Solaris Prosafety is going to conquer the customer with leatherette seats. Also with electromechanically folding mirrors, as well as a media system with additional functions and a built-in navigator: neither the Rapid nor other competitors have any of this yet. The Hyundai got a remote engine start with a memory of turning all the heaters on. However, the start is not confirmed by turn signals and only available in top versions in combination with keyless access.

The advantage of Rapid is Front Assist, the first distance control and auto braking system in the budget segment with a radar in the front bumper’s lower part. A little “roll” on the forward-moving car, and a warning will appear on the display. Later, they will also offer an electronic instrument panel. But for now we have to suffer with poorly readable old-style dials. A high beam assistant is another option unique to the segment.

The Skoda interior looks richer than the Korean one, especially in the “top” version, with a silver insert opposite the front passenger. By design means, a visual sense of modernity and interior quality returned to the Rapid. Although in fact, there is hard plastic everywhere, except for the armrests. The fabric pattern on the seats is cute. But they didn’t become more comfortable, retaining an unregulated dip in a lumbar area. The fit is not so eased: despite all the adjustments, the steering wheel is closer to the pedals than in the Hyundai. And so it was. 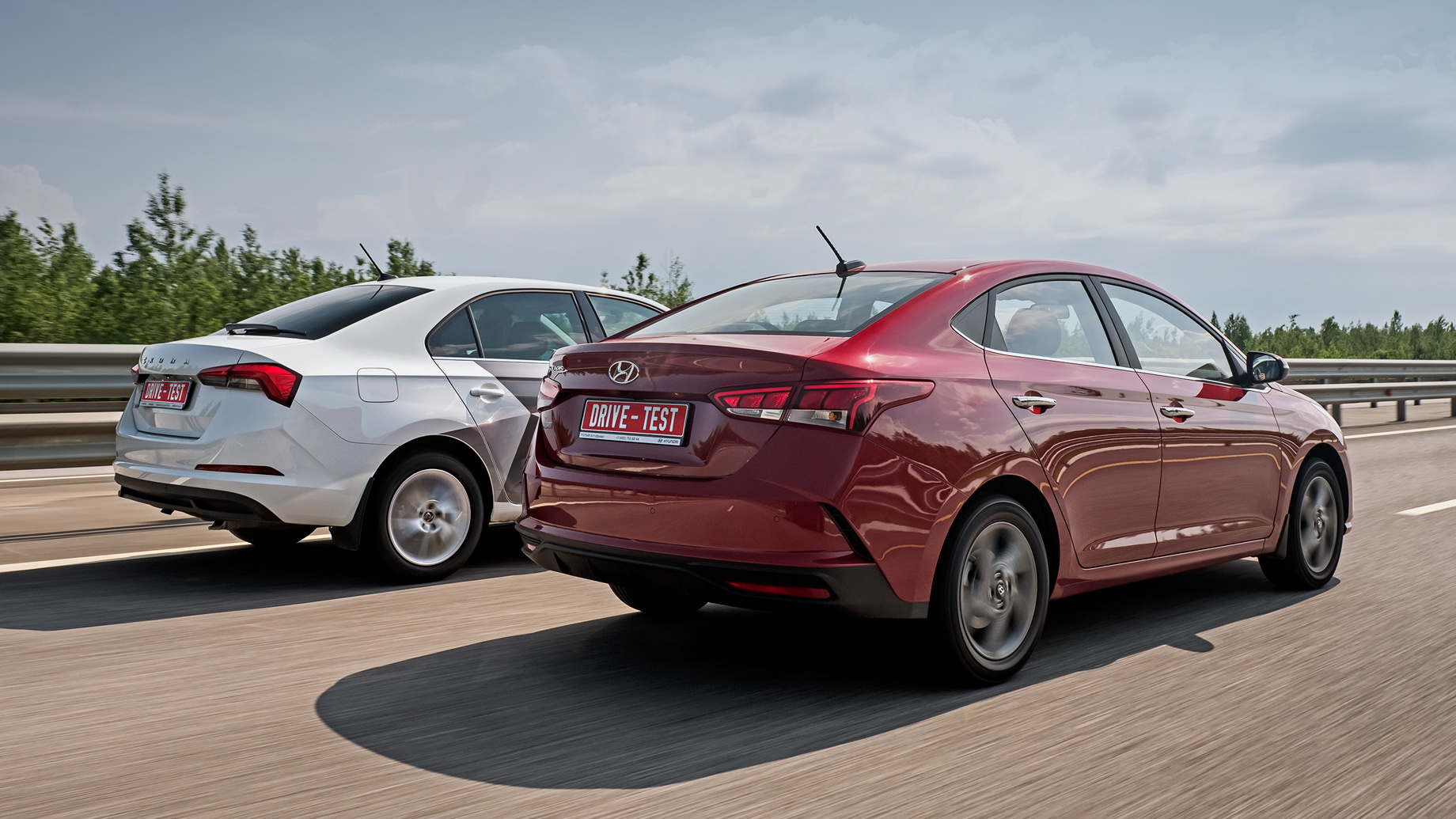 The Solaris seats are more rigid, flatter, and have a shorter cushion. However, the lumbar support with electrical adjustment (already in the basic version!) strains your back on a long journey less. Always wet back, “thanks to” leatherette.. The Hyundai’s interior has also become more interesting. The ceiling is better than the Skoda’s one, but deflectors with a sliding closure allow air to pass slightly in the “locked” position. The grown-up eight-inch media system display live sticks out of the panel not as brazenly as on photos.

However, the optional Skoda media complex is distinguished by better graphics, a more interesting design, and a lower latency in touch responses. In the Solaris, you need to push the screen harder to achieve a reaction. And the vaunted navigator is activated every other time — in response to pressing the icon, often either nothing happens, or an error message pops out. The only claim to the Rapid’s multimedia is an unstable Bluetooth connection with a phone.

What cool three-dimensional music and on-board computer control panels on spokes of the new Skoda steering wheel, with rotating and pressing drums! I wanted to say “worthy of a premium”, but at the first turn my fingers got on a strange bead in the lower part of the two-spoke steering wheel, and a decorative plug fell out of it.. And yet the number of pleasant nuances in the Rapid is slightly more. Take, for example, a fully heated rear seat against only a cushion in the Solaris or an adequately functioning climate control against a noisy Korean plant that dramatically changes the temperature of streams.

Even children now know how much more capacious and convenient the Skoda trunk is. It’s not just about the volume and much more convenient access thanks to the liftback type body. You can order a hatch for long goods for the Rapid. There is also some kind of organizer under the floor, and not just bare metal, as in the Hyundai. Plus hooks, Velcro fasteners for cargo, a 12-volt socket.. Let me remind you, two test cars cost the same.

Rear seats of the Rapid are also more spacious. It’s a mystery to me why the Solaris is so popular as a taxi, because the seat here is frankly cramped: I rest both my knees and my head “behind myself” with a height of 6’2. Life is possible only if a taxi driver pushes the right seat forward. The Skoda already has extra space for a couple of fingers on the knees, and the ceiling is about an inch higher. The Rapid has cup holders and a central armrest at the back, the Solaris doesn’t. There are two pockets in the seat backs in the Czech car, and only one in the Korean one. None of them has automatic rear windows.

Don’t wait for news on driving characteristics: the settings haven’t actually changed. However, the Solaris and the Rapid haven’t duel on our pages before, so I will remind you of the main features. On the Korean side, there is a more powerful engine (123 hp versus 110), and this difference is felt in the acceleration “to the floor”. Skoda takes an additional fee for a vigorous 1.4 TSI turbocharged engine (125 hp) with a DSG robot. Here, both automatic transmissions are six-speed, and both are not good guys. It is fine with a calm ride, but at an uneven pace, both the Solaris and especially the Rapid twitch when shifting gears down, accompanying acceleration with a roar of engines. The advantage of the Hyundai is distinct engine braking.

However, this power is enough to safely maintain 87-93 miles/h, for example, on the M11 toll highway, along which we traveled. It is more pleasant to drive the Skoda here: it keeps a straight line without any problems, logically centering the steering wheel. The Solaris requires small corrections complicated by some “opacity” of the steering drive in a near-zero zone. Although there are no problems with either reaction or responses in turns. Moreover, the Hyundai behaves more interesting in an extreme turn, showing a minimum of understeer characteristic of the Skoda.

The wheels of both cars are 16-inch, whereas most budget cars are sold on the “fifteenth”. On a flat road, the Solaris doesn’t ignore any defect of the roadway, although it overcomes the country lane flexibly, with good power intensity. Rough asphalt causes a more noticeable high-frequency itching on the steering wheel and pedals than in the Skoda. The Rapid walks a little more nobly along the highway, with a pleasant hint of rocking on the waves, but is more afraid of broken roads, shaking harder at pits and joints. And the voicing of irregularities in the Skoda is rougher. Although, summing up all that has been said, the smoothness of these cars is about the same level. 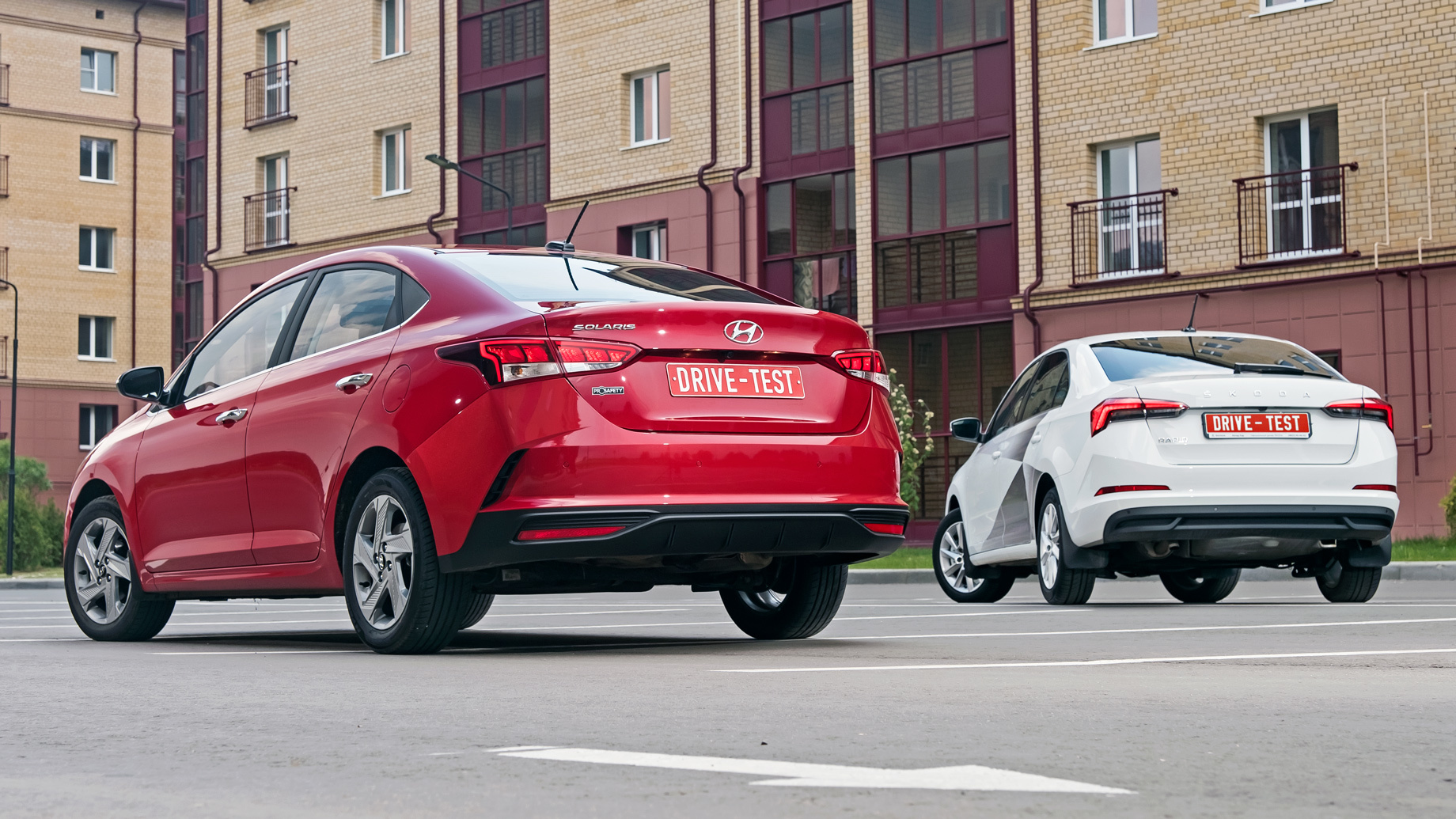 However, the Solaris is noisier and more vibro-loaded. It feels like the engine is idling. In the city, the interior is filled with the hum of tires, and it dominates other sounds, for example, the roar of the engine during vigorous acceleration, up to 60-75 miles/h. But the aerodynamics are quieter here, whereas it begins to manifest itself in the Skoda at similar speeds. On the highway, the Rapid no longer has such an advantage in acoustic comfort as when driving slowly.

Nevertheless, designers can adjust the front seats profile of the Skoda, expand the small mirrors and deal with the unchanged tunnel, on which neither a mobile phone nor a thermocup can be placed normally, and everything will be quite fine. In general, the work on the mistakes is deep. The update of the Solaris took a step a little wrong, into kitsch like leatherette. It’s high time to do something about the noise, while the chassis has always been vigorous. In terms of a price/quality ratio, the Hyundai doesn’t win against the Skoda. At least, in these expensive versions.

This is a translation. You can read the original here: https://www.drive.ru/test-drive/hyundai/skoda/5ef4beefec05c49b2f00010a.html

Please type your email in the field below and click "Subscribe"
July 08, 2021 How to avoid theft of a keyless car