Tesla: the present and future

The youngest automobile company, whose historic journey began in 2003 and hasn’t amounted to even a couple of decades yet, today produces premium sports electric cars. The company is named after the world-famous scientist-electrical engineer Nikola Tesla. It was patented by Nikola Tesla in 1888 the induction alternating current motor that became the basis for the design of power trains installed on Tesla cars. Let’s try to identify the main points of formation and development of such a young automaker, as well as to characterize its prospects.

How the idea of creating Tesla appeared

Tesla Motors is a startup project of American Silicon Valley. Among the company’s investors, there are Google founders Larry Page and Sergey Brin, PayPal co-founder Elon Musk and Jeffrey Skoll, founder and president of eBay. The quintessence of the idea of an electric car is the environmental dimension – the world must stop poisoning the environment with car exhaust. Traditional sources of energy based on hydrocarbons should be replaced by others that exclude the possibility of damage to nature and human health. Elon Musk set about the idea in college, and has since tried to prove the prospects of electric cars. Musk also positioned the line, according to which the main principle of the development of electric vehicles should be the principle of cars’ availability for the mass consumer. For this idea, Elon Musk was given the 2006 Global Green award for the development of the Tesla Roadster and the 2007 Index Design award for the design of the Tesla Roadster.

July 1, 2003 is considered the birth date of the Tesla brand. It is not the first company to produce cars with electric traction. Excluding the 19th century and three-quarters of the 20th century, in the 1990s, the companies Ford, Toyota, General Motors, Honda became pioneers in the production of electric cars and revival of environmentally friendly road transport. Thus, a beautiful sports car with an open top was developed, which won the hearts of many. The Renaissance Tropica reached 100 km/h and could drive up to 130 kilometers without recharging. Today, the market of electric vehicles has several dozens of models belonged to different brands. The leading position is taken by Nissan with its Leaf electric car model. This electric car has a global market share of more than 25 %. The Toyota Prius plug-in actively competes with the Nissan Leaf. Other popular models are the Renault Twizy, the Peugeot 3008 Hybrid4, the Honda Insight, the Lexus GT200h, the Toyota Prius, the Opel Ampera, the Chevrolet Volt, the Smart ForTwo Electric Drive, etc. But the Tesla brand occupies a special niche. These are premium sports cars. They were initially positioned as superior to competitors. This is not just a car with batteries for adults, which costs $100 thousand (although today there is a model that is half the price).

Tesla Motors was founded by Martin Eberhard (electrical engineer) and Marc Tarpenning (computer developer). The founders are originally from California. This state became the first in the US, where in the 1990s the resolution about increasing the number of environmentally-friendly cars to 2% came into force, and by 2003 their number had to be at least 10% of the total number of vehicles in the state. Tesla was not the first joint creation of Eberhard and Tarpenning – back in 1997, they founded NuvoMedia, which sold for $187 million in 2000. So there were funds for a new startup. Martin Eberhard became part of the AC Propulsion team, one of the Tzero developers. Its main goal was to make from a luxury electric car a serial-produced one. The developer replaced lead-acid batteries with lithium-ion ones similar to those used for laptops. Year by year they became cheaper, and the characteristics were not inferior to the original Tzero batteries. Having developed the Tzero which could now accelerate to 480 km/h, Eberhard invited the managers of AC Propulsion to launch its serial production with a lithium-ion engine. Having been refused, he and Tarpenning decided to found Tesla Motors.

Eberhard and Tarpenning opened the first Tesla Motors office in the office center of the California city of Menlo Park. Throughout 2003, the partners refined their idea and formed a commercial proposal that could be of interest to potential investors. The developers decided to start with the production of a two-seater sports car, and then gradually develop more massive segments. As the basis of the new electric car, it was decided to use the Elise model of the British racing car manufacturer Lotus, Tesla also borrowed some components from the Tzero. The founders of the new brand remembered Elon Musk. He agreed to invest in Tesla Motors and became Chairman, Board of Directors of Eberhard and Tarpening’s company. According to Business Insider, the first round of investments amounted to $7.5 million. Until 2006, there was no disagreement between the founders of Tesla Motors and Musk. But then the latter decided to turn from an “early investor” to the founder of the brand (which, to put it mildly, didn’t correspond to reality) and the developer of the Roadster concept (which was also untrue). Eberhard was outraged. In addition, the endless proposals to optimize the Roadster electric car prevented him from acting as the general director of the company. The deadline of the first Tesla model’s release was missed, and the reason for that was Musk. Eberhard left Tesla Motors in mid-2007, and Tarpenning left the company later that year. A new era began in the management of Tesla Motors: tighter, aggressive and at the same time effective management of Elon Musk did his job – the whole world started to speak about Tesla. Alas, the development of the car cost $140 million, five times higher than originally budgeted. 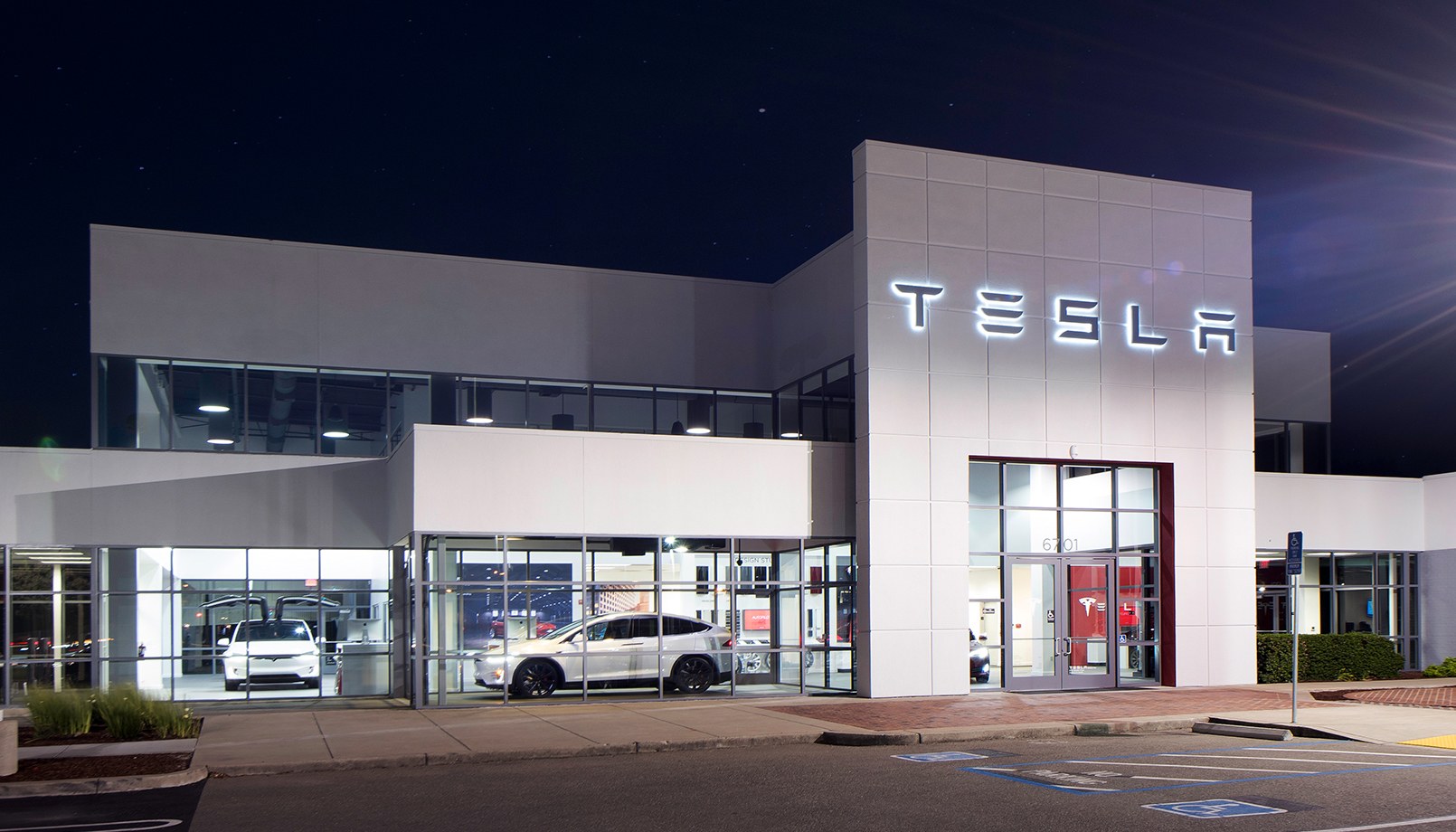 Financial aspects of the project for the production of electric cars

In May 2006, Elon Musk, together with Technology Partners, received the third tranche of investments of $40 million, including funds from Google co-founders Sergey Brin and Larry Page, former eBay president Jeff Skoll, and others. The fourth tranche in May 2007 added another $45 million and brought the total volume of investments made in this enterprise from private sources to more than $105 million. On May 19, 2009, the German company Daimler AG, a Mercedes car manufacturer, acquired a stake of Tesla of less than 10% for $50 million. In June 2009, Tesla was approved as the recipient of an interest-bearing loan of $465 million from the U.S. Department of Energy. The funding, part of an $ 8 billion advanced vehicle technology program, supported the design and production of the Model S sedan, as well as the development of powertrain technologies that Tesla planned to sell to other automakers. The Department of Energy’s loan program was created in 2007 during the George W. Bush administration to get more fuel-efficient car options for American consumers and reduce the country’s dependence on foreign oil. In early August 2009, the company announced that it had achieved overall corporate profitability in July 2009. According to the company, it made about $1 million in profit with revenues of $20 million. In 2009, Tesla Motors sold 937 Tesla Roadster vehicles to customers in 18 countries and generated $126.8 million in revenue as at December 31, 2009. On May 21, 2010, Tesla announced a “strategic partnership” with Toyota, which agreed to purchase $50 million of Tesla common stock issued as part of a private placement, with the transaction immediately following Tesla’s planned an IPO. Executives from both companies said they would collaborate on “the development of electric vehicles, components, production system and engineering support.” Less than two months later, Toyota and Tesla confirmed that the first project of their joint platform will be the creation of an electric version of the RAV4 model. On June 29, 2010, Tesla Motors shares began trading on the Nasdaq Stock Market under the TSLA symbol. The IPO raised $226 million for the company. It was the first American automaker to go public since the IPO of Ford Motor Company in 1956.

Despite the fact that Tesla has no net profit yet, and the loss only for 2018 exceeded $970 million, the company continues its development. 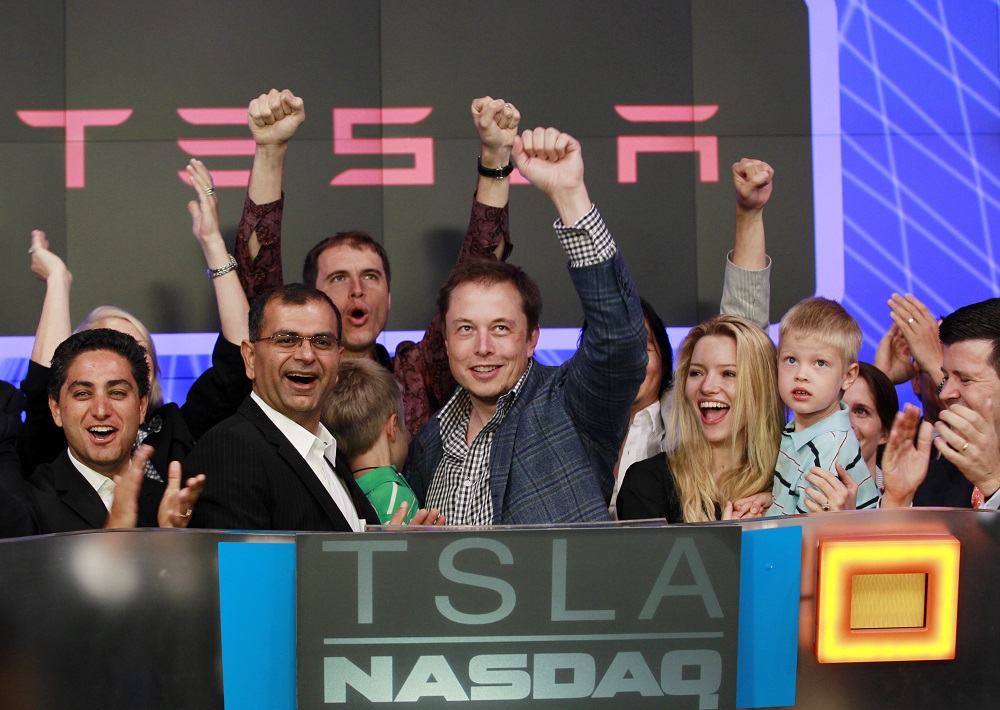 What Tesla Motors has to offer today

Tesla’s manufacturing facilities are located in its own factories in Fremont, California, USA, and in Tilburg, North Brabant, Netherlands. By 2020, in Nevada, the company, together with key partners, plans to build a plant for the production of lithium-ion batteries for their cars. This plant should become the world’s largest producer of such products. 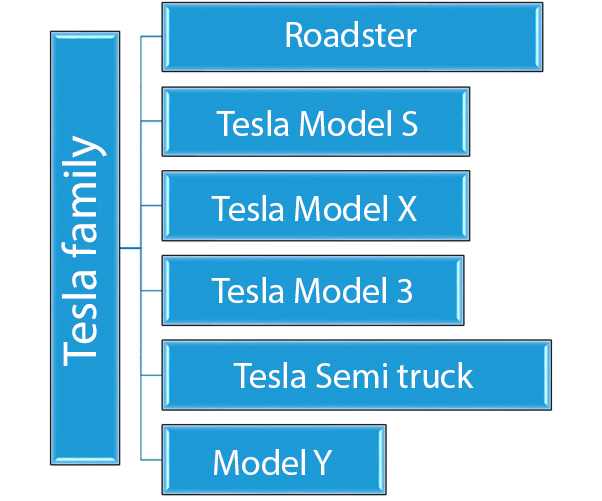 The Roadster was successful – by 2012, the number of cars went off the assembly line was 2600 units. The characteristics of the electric car exceeded all expectations – the car accelerated to 60 miles (100 km) per hour in 3.6 seconds and could travel 220 miles (350 km) without recharging. Since Tesla’s contract with Lotus for the supply of 2.5 thousand cars expired at the end of 2011, in 2012 the model stopped being sold.

A prototype of Tesla’s second model, the Tesla Model S, was presented at the 2009 Frankfurt Motor Show in Germany. The second Musk’s electric car came off the assembly line in 2012. The Model S can travel 426 kilometers on a single charge. Full battery charging time has been reduced to 30 minutes. In the most expensive configuration, the car is able to accelerate to 100 km/h in 3.1 seconds. Prices for the Model S start at $75 thousand.

In 2015, Tesla started a serial production of its first full-size crossover – the Tesla Model X, able to overcome about 500 kilometers on a single charge.

In 2017, the company produced its most economical model – the Tesla Model 3, the price of the standard version of which didn’t exceed $35 thousand. The model was presented to the public on April 1, 2016. The presentation of the prototype took place a year earlier, and for the first week of pre-sales the car was reserved by 325,000 people.

In 2019, deliveries of the Tesla Semi electric truck started. Without recharging the battery, the Tesla Semi can overcome a distance of up to 800 kilometers. Without cargo, the vehicle accelerates to 100 km/h in 5 seconds, and with a full load of 36 tons, the acceleration time is 20 seconds. The battery of the electric towing track is fully charged in just 40 minutes. It is curious that in 2017, the company received orders for the Tesla Semi from global corporations. It is known that only PepsiCo has reserved 100 electric trucks for its own logistics service. 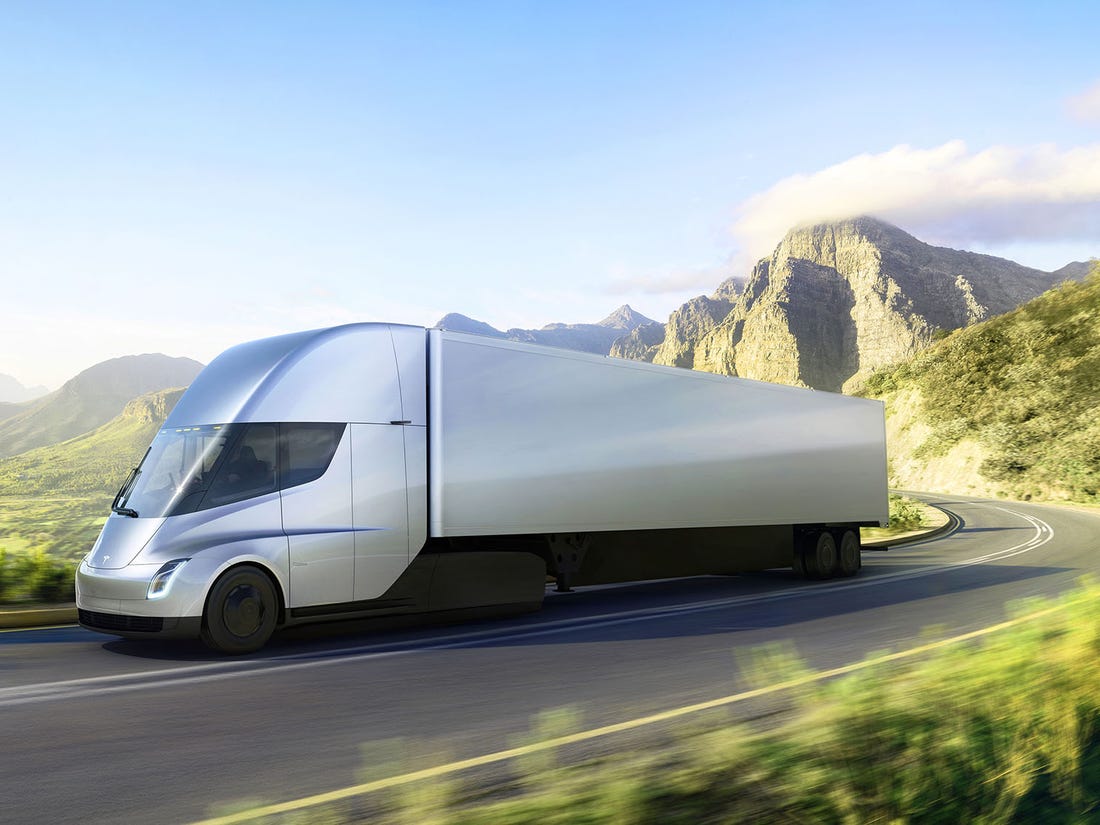 In March 2019, Tesla held a presentation of its first SUV, the sixth model, the Model Y. Serial production of cars will begin only in the fall of 2020. The Model Y has a range of 370 km without recharging and accelerates to 100 km/h in 5.9 seconds. The maximum speed of the car will be 193 km/h. The car in the basic configuration will cost $39 thousand. 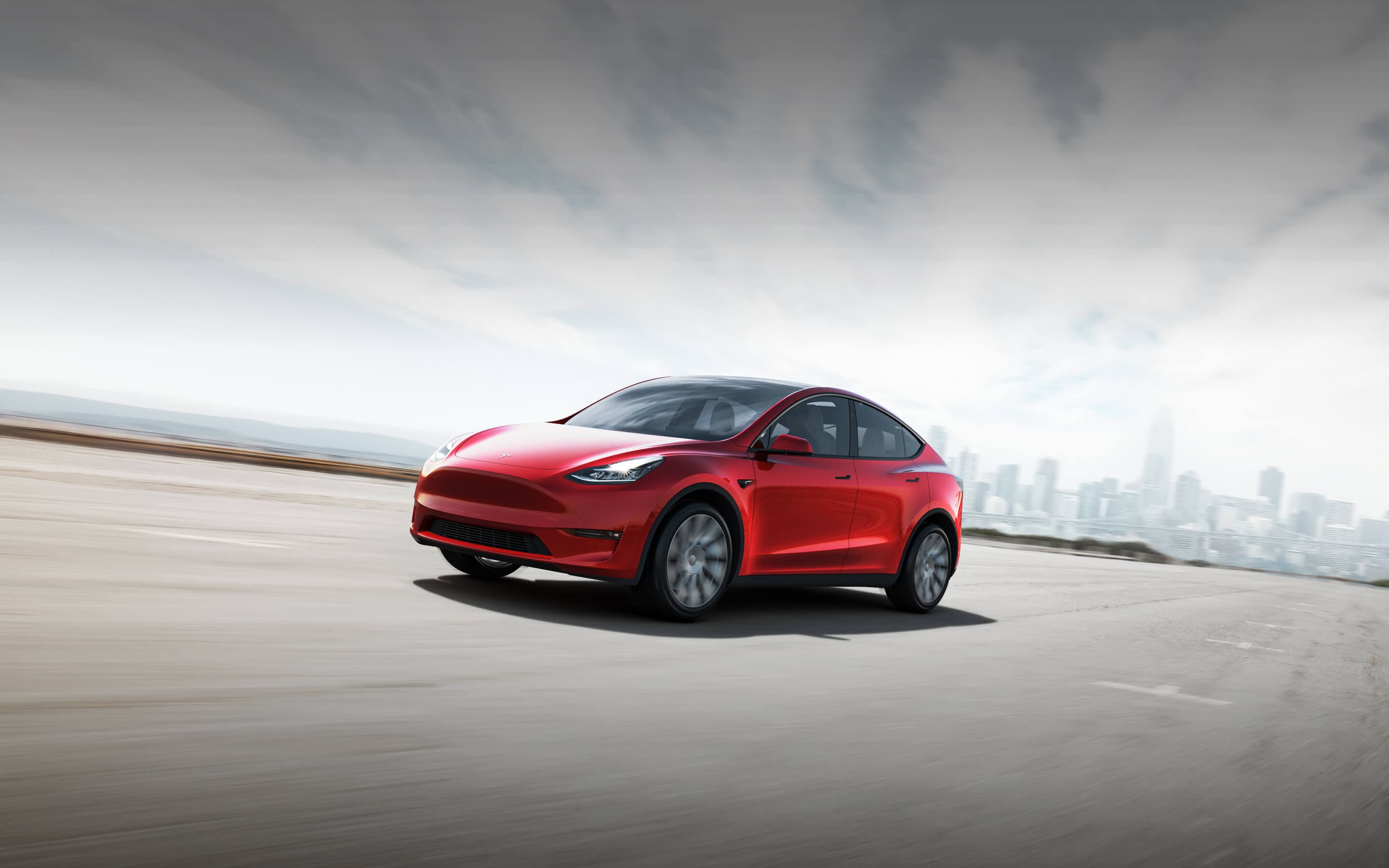 It is interesting that in order to buy a Tesla car, you need to leave a request on the official website of the company. But to drive an electric car is not enough to have it, you must also have a driver’s license (the best option is an international one). You still don’t own it? We invite you to quickly and easily process an international driver’s license on our website. This document is useful while driving not only an electric car.

Please type your email in the field below and click "Subscribe"
July 09, 2018 The world's most beautiful cars