The Lexus RX is an unambiguous leader among premium mid-size crossovers. The closest pursuer, the BMW X3, sells a third worse. Meanwhile, among the almost ten thousand RXs sold in 2019, there are also 162 elongated copies of the RX 350L version. The length is 16 feet; there are three rows of seats and only rich equipment — the competition is already in the large crossovers segment. But in it, the seven-seat Lexus is the worst in sales. To determine the reasons for the failure, we took the Volvo XC90, which is similar in size and price, as a reference. Moreover, with a D5 diesel engine, which the Lexus doesn’t have in principle.

The Swedish mastodon looks conservative even with the R-Design body kit. Both cars are rooted in 2015, but the Lexus has been preserved better. Not everyone likes the boldness of its forms, but the Asian singularity attracts more attention than the Scandinavian avarice. The extension of the rear overhang by more than 3.5 inches almost didn’t spoil the proportions. Plus, the Volvo body is assembled worse: gaps between the panels are not so uniform. 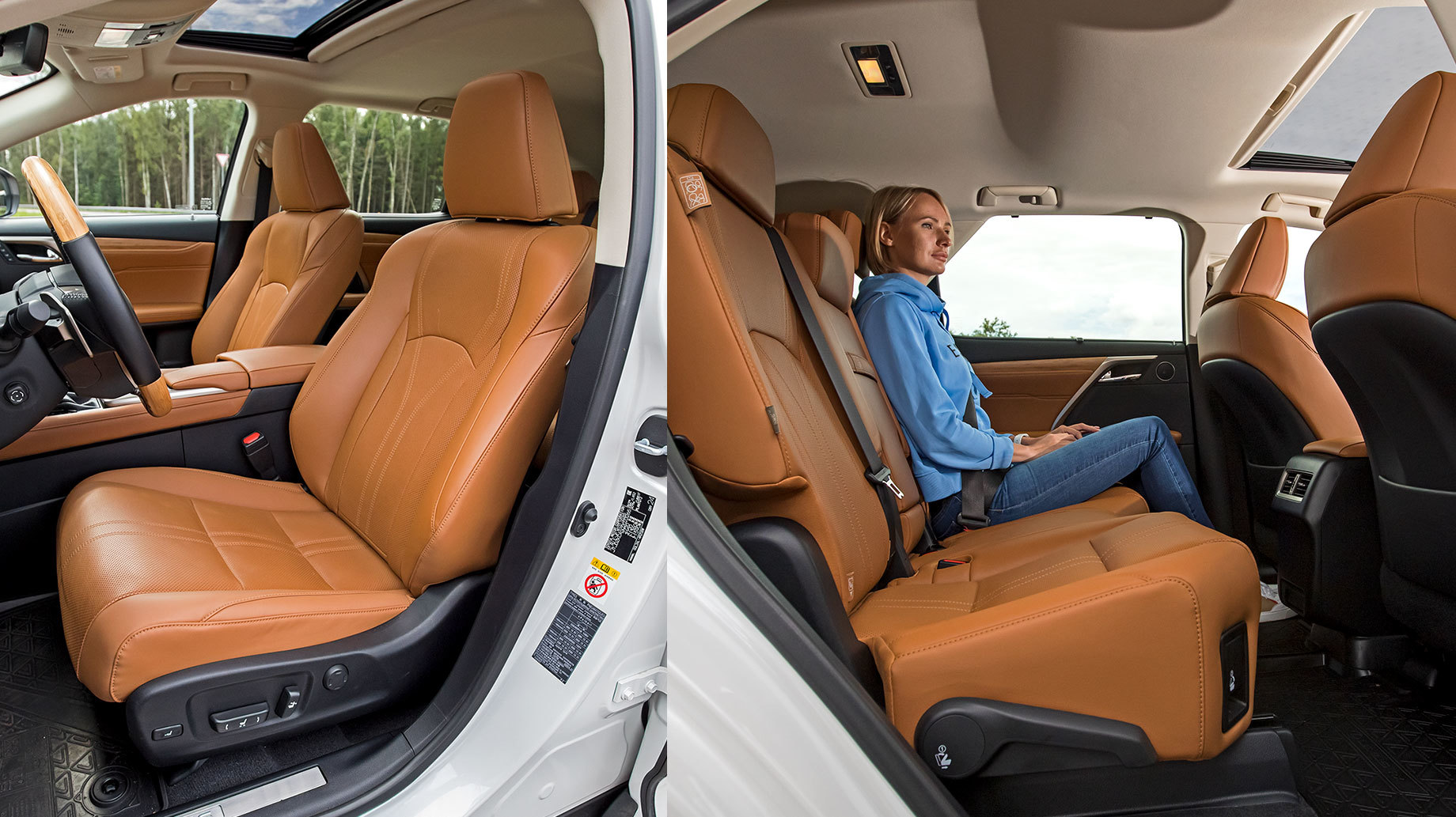 They say American mothers who take their children to school are the main buyer of seven-seat crossovers. Which of the pair is better suited to the role of a minivan substitute? The second row is spacious in both cars, although in the Volvo it is more likely to seat a passenger between two child seats standing on Isofix mounts. While the distance between centers of their inner brackets reaches 21 inches in the XC90, it amounts only 18.5 in the RX. At the same time, all three rear seats in the Volvo can be moved, adjusted and folded individually. However, the absence of a tunnel and a welcoming soft seat make staying in the second row of the Lexus more pleasant.

In any case, you have to fold seats manually to get to the back row, but in the Volvo the mechanism is so tight that not every young lady will cope. To unfold the sixth and seventh seats in the XC90, you have to use physical force again, and the RX flaunts an electric drive. But what is it? After about 15 seconds of its operation, two seats stand in different positions – one low and far, the other higher and 4 inches closer to the second row.

It turns out that both positions are standard and can be selected by pressing the folding button again when the seats are folded. But variability does nothing for those whom fate has pushed into the third row. You sit on your posterior anyway. The second row should be moved forward so that the person with a height of 5’9 sitting on it rests his knees against the front back. The ceiling is low, nothing can be seen through the mini-portholes, although thanks for a separate (third) climate zone and deflectors.

Although the Volvo is shorter by 2 inches, it gives more space and comfort to “third-rowers”. The aisle to the seats is just as narrow, but they are more comfortable, somehow support the hips and are suitable not only for driving from school to home. The ceiling is higher, and a passenger of average height doesn’t rest his head against it, as in the Lexus. No one has Isofix mounts on the third row. You will have to ask those sitting in the second row to adjust the temperature in the Swedish car, and only if you pay extra for four-zone climate control. 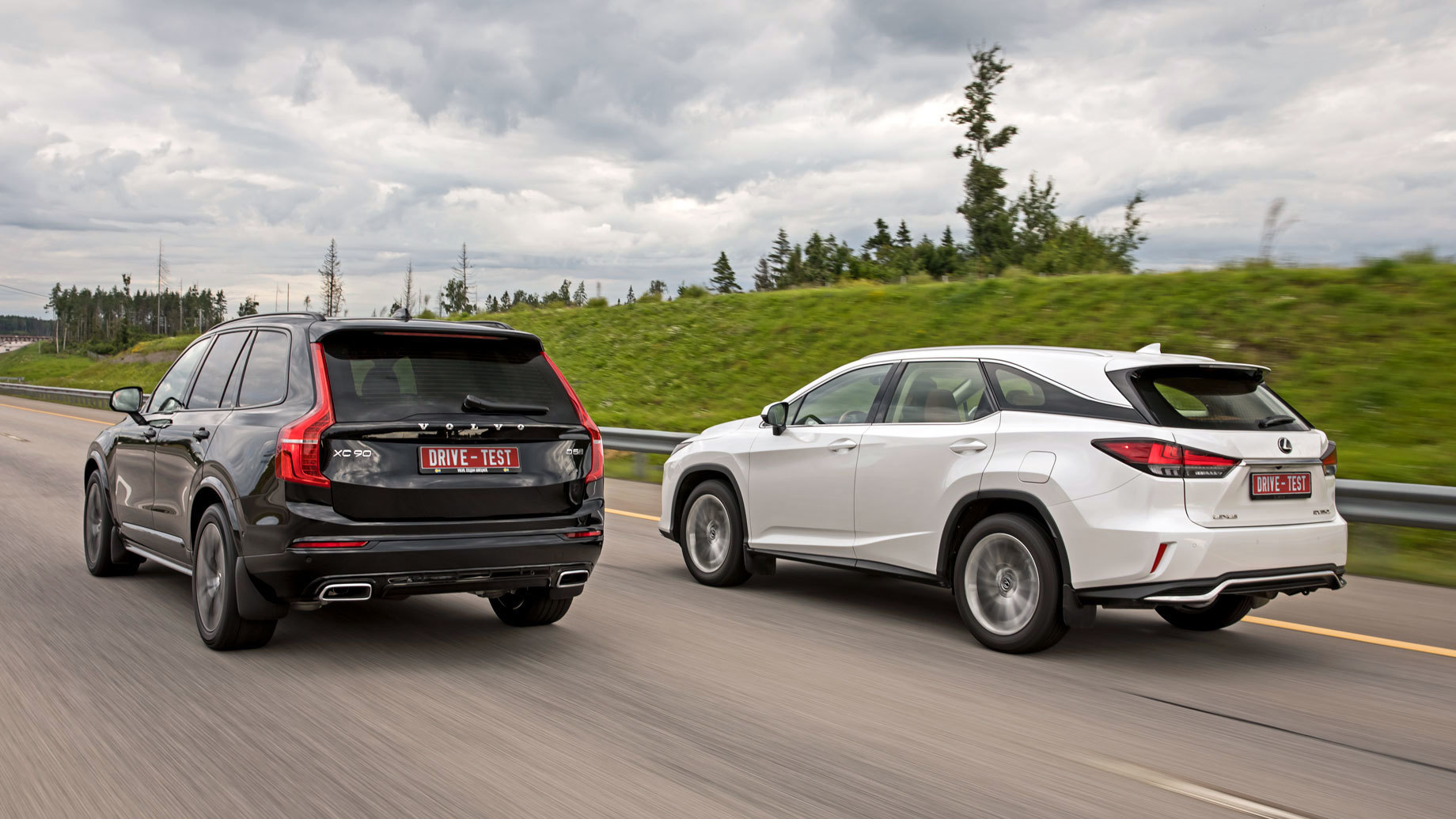 But the total victory of the Swedish car in the “comfort” category is out of the question. Thanks to the design, it seems only from the outside that the Volvo is homely, soft, cozy, and the Lexus is youth-sporty. Suspicions may increase due to the fact that the RX has an alternative spring suspension, and our XC90 is equipped with an optional pneumatic one. At the same time, the R-Design version doesn’t imply a reconfiguration of the chassis: everything is standard. The wheels in both cases are 20-inch, but they are noticeably narrower in the Japanese car — 9.25 inches versus 10.8 inches.

The Volvo drives rigidly in the German style, not ignoring any coating defects. Somehow the trifle and the large bumps are smoothed out — this is not a bone-shaker, life is livable. However, don’t expect magic, because the advantages of the air suspension reveal themselves only off-road. But we’ll get to that. The XC90 reacts adequately to the steering wheel, rolls slightly: there is the Teutonic spirit again. Ruts in the asphalt noticeably push the wide wheels off the trajectory. In fairness, the driver is hinted at the lack of compromises even at the fitting stage, when he is wrapped with a rigid profiled seat.

It is more convenient to enter the Lexus, because the sills are tiny and covered with doors, but beanpoles should protect their knees from the front panel protruding into the opening. Plopping into the seat, you dissolve into it, forgetting about its weakly expressed lateral support. The softest top layer, pleasant leather, wood around… The steering wheel is also soft to hold, but only these leather-wrapped places of grip are heated in the winter. The base configuration has a column electrical adjustment that is not available in the Volvo. You calm down so much that conservative devices without a digital speedometer and an inconvenient multimedia system with an anti-human touchpad don’t infuriate. It’s not easy to get into any menu item on the go with it.

The ride is surprisingly smooth — the suspension is “loose” so much that the Lexus swings back and forth with careless acceleration and braking. Most small and medium-sized irregularities melt in the depths of springs and adaptive shock absorbers, and the switch of the chassis to Sport or Sport+ modes almost doesn’t change the picture. Swinging on the waves and repeated fluctuations of unsprung masses when exceeding the speed of 18-24 miles/h on speed bumps complete the picture of the “old American” settings. The steering wheel is not sharp, with a sluggish reactive action on a straight line and almost absent in a turn. In general, it is a lulling car. 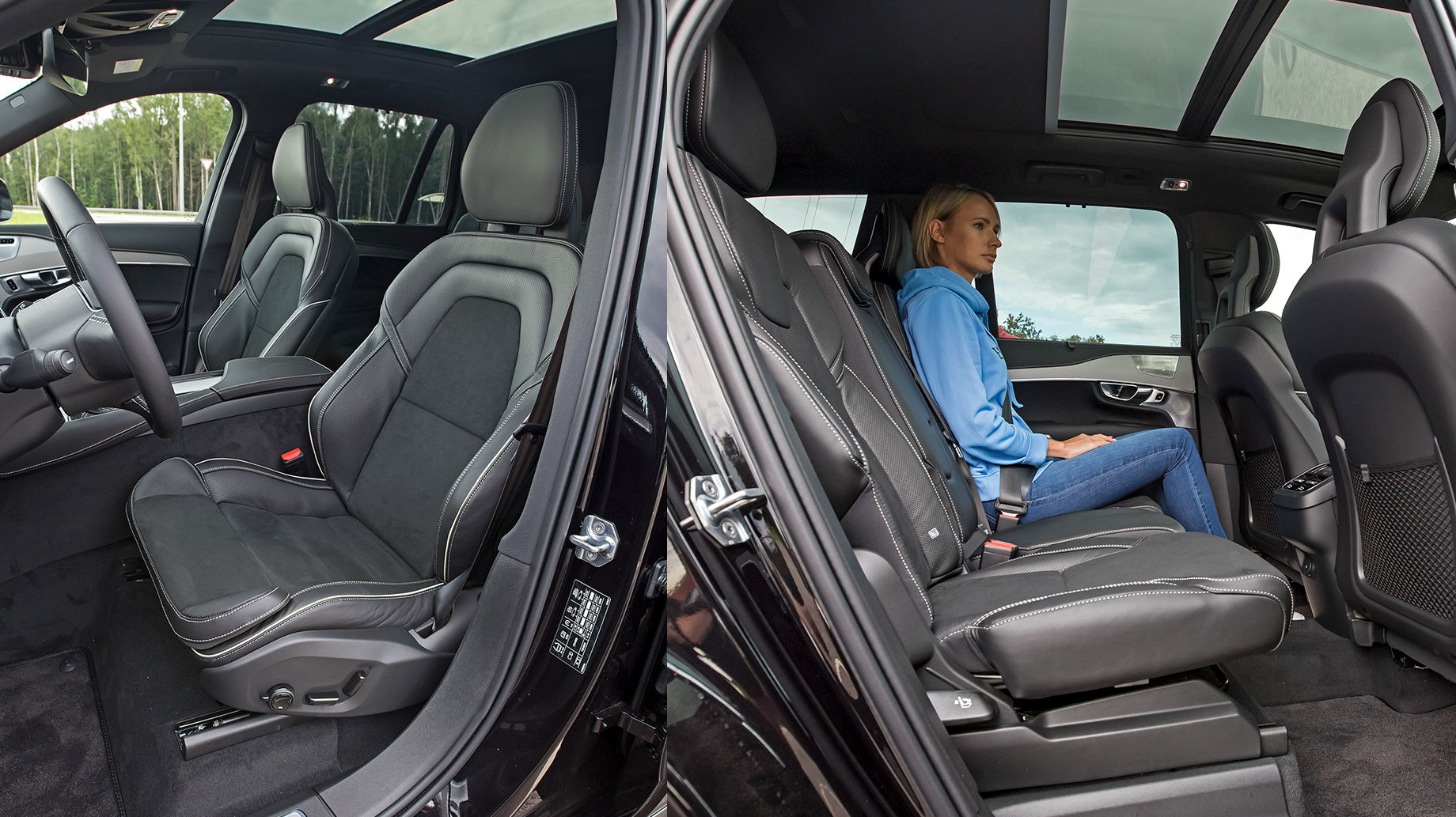 And pretty quiet. The Lexus has noise-insulating glass only in the front, but the level of external and road noise is comparable to the Volvo and its optional triplex in all four door windows. The Swedish diesel engine rumbles softly, but constantly, and the Japanese V6 is heard only during acceleration, when the revs go to the second half of the tachometer scale. You don’t regret it: the voice of the naturally aspirated engine is pleasant, weighty.

And it seems like the RX 350L accelerates faster. The reaction to the accelerator movement is quite lively, especially in the first part of the stroke and in contrast to the delayed response of the diesel Volvo. However, the XC90, with any driving style, retains the predictability of responses, even if not sporty. There is the same eight-speed Aisin automatic transmission under the hoods of both cars, but in the Lexus settings, the box can easily stumble, sharply indicating shifting down with the harmless addition of gas. The brakes are also too tight in normal modes. The Swedish car doesn’t seem so heavy while slowing down.

Among the driving modes of Lexus, there is not a single off-road. And pressing the button to forcibly lock the rear wheel drive clutch doesn’t affect the inability of the car to climb up when cross-axling. It seems that the electronics don’t even try to simulate the locking of the inter-wheel differentials. The only thing that can be written down as a plus for the RX off-road is an honest 7,8 inches of ground clearance and good smoothness.

The Volvo even sits 0.79 inches higher in Comfort, and according to my measurements, it rises to 10 inches in Off-Road mode! At the same time, the air suspension doesn’t start knocking on the rebound bumpers, as it happens, but bumps could be rolled more gently. An important plus: shorter overhangs, because the base of the XC90 is 7.8 inches larger, and the overall length is smaller. There is more suspension travel — cross-axling comes later. And the main thing is that traction control electronics effectively fights with it, and even on two wheels the XC90 bravely crawls forward. On the trail, the Volvo is able to get much further. 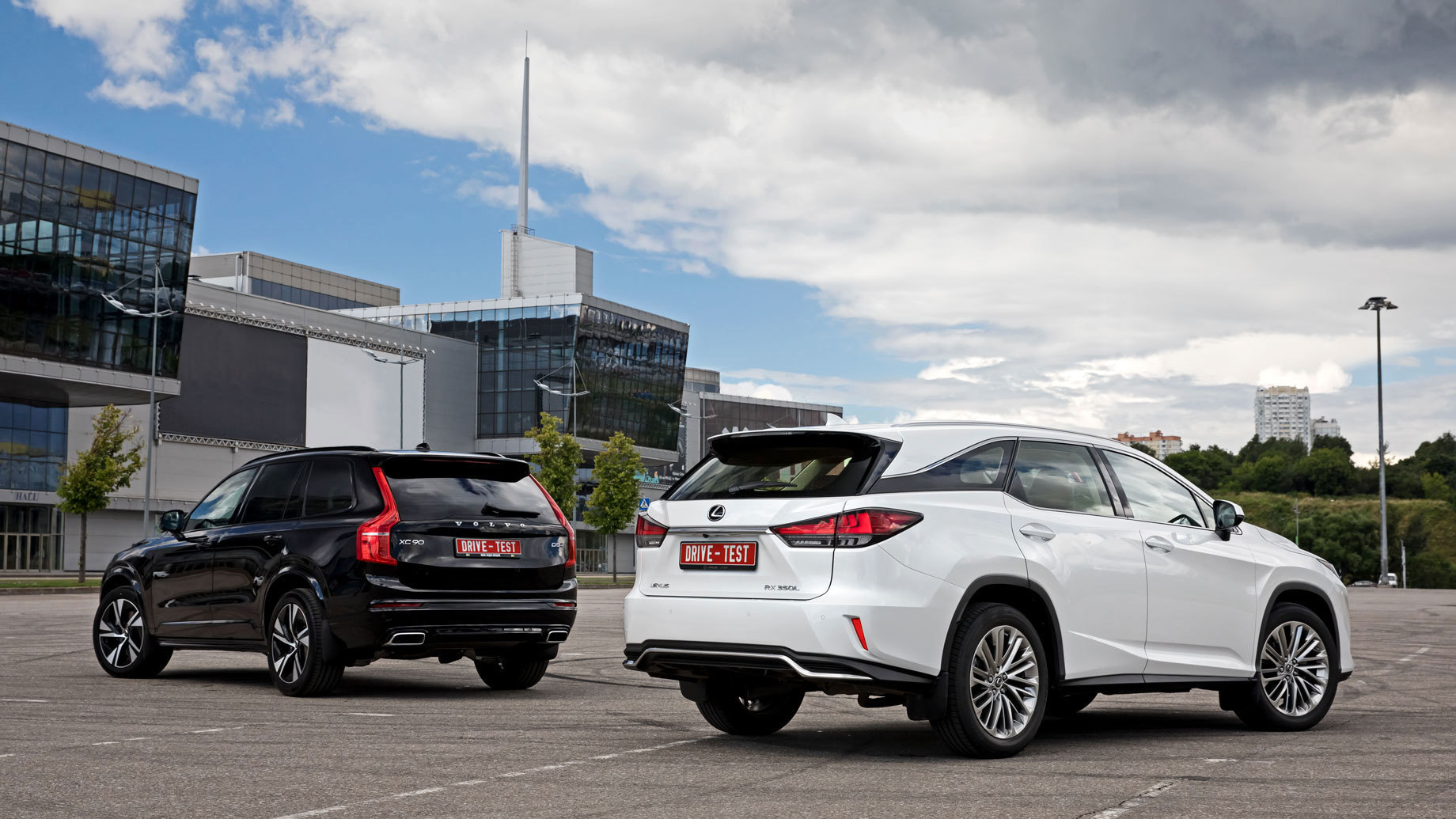 And all the rest of the Swede’s electronics work as if they were made ten years later than the Lexus. The instrument panel is painted, the media system is more advanced in functional abilities. There are even too many of them, because there are almost no physical buttons left, and you have to activate the heated seats or the all-round camera through the menu. The adaptive cruise control drives the car more boldly, there is a taxiing within the line system – the Pilot Assist complex. And the Lexus takes out the brain with the constant tinkling of warnings about traffic cameras, which cannot be turned off!

For example, such a moment as the operation of the electric drive of the trunk door. In the Lexus, it crawls slowly and noisily, and the lid eventually turns out to be too low above the ground, with the risk of hitting those above 5’9 on the head. There are no such questions for the Volvo. The cargo compartments themselves are comparable in size, trim, options and convenience of transformation. The nuance is in the location of the spare tire space saver wheel. In the RX, it is attached under the floor from below. Thanks to this, we have a place for a curtain in the crawl space, but the process of replacing the wheel itself became more complicated and dirtier.

Bringing the observations together, I note the unequivocal advantage of the Lexus in driving comfort. And for the feather-bed seats, you can forgive even a slightly less comfortable third row of seats. Anyway, it’s only suitable for teenagers in the Volvo. And in general, the failure of the RX 350L on the market is groundless. If your wife is not a racer and not a techno-freak, buy her the Lexus, although first look at the difference in fuel consumption between a gasoline V6 and a two-liter Volvo diesel. However, the seemingly more modern XC90 is also devoid of one hundred percent harmony: why would a practical crossover need a “bulky” suspension? And there are many comments on small things. Dead heat.

Please type your email in the field below and click "Subscribe"
January 25, 2019 What to fill a car cosmetics bag with