A car is operated in various conditions, often far from ideal. A road surface may be covered with small pebbles or gravel, snow or rainwater. As a result, a mass of foreign particles flying out from under the car wheels can damage both the car itself and the vehicle driving behind it. Self-harm consists not only in chips, scratches and cracks, but also in accretion of the snow-ice mass, mud particles, etc. to the bottom. In any case, this reduces the useful life of the vehicle and makes the driving unsafe. To prevent the development of corrosion spot and avoid stones, dust and water streams flying out from under the wheels of the car to vehicles travelling behind, splashers are used. They are mandatory elements of each car, regardless of the country and year of manufacture.

The functional purpose of splashers is largely determined by the place of their installation. Front and rear splashers are designed to protect various objects: the front – to prevent the car bottom’s damage from stones and other road rubbish. This is especially true in winter, when dirt from under the wheels mixed with various chemical reagents can freeze on the bottom with a very dense layer, thereby provoking the appearance of corrosion spots. It should be noted that when driving at high speed without splashers, you can breach the bottom of your car with small stones, or break the glass of vehicles moving behind.

Rear splashers are designed to prevent behind vehicles from stones, dust and water flying out from under the wheels of your car. If the rear splashers were not installed on cars, then, in bad weather conditions, drivers would have to keep at least 500 m distance from each other, otherwise cars moving ahead would completely deprive them of visibility. 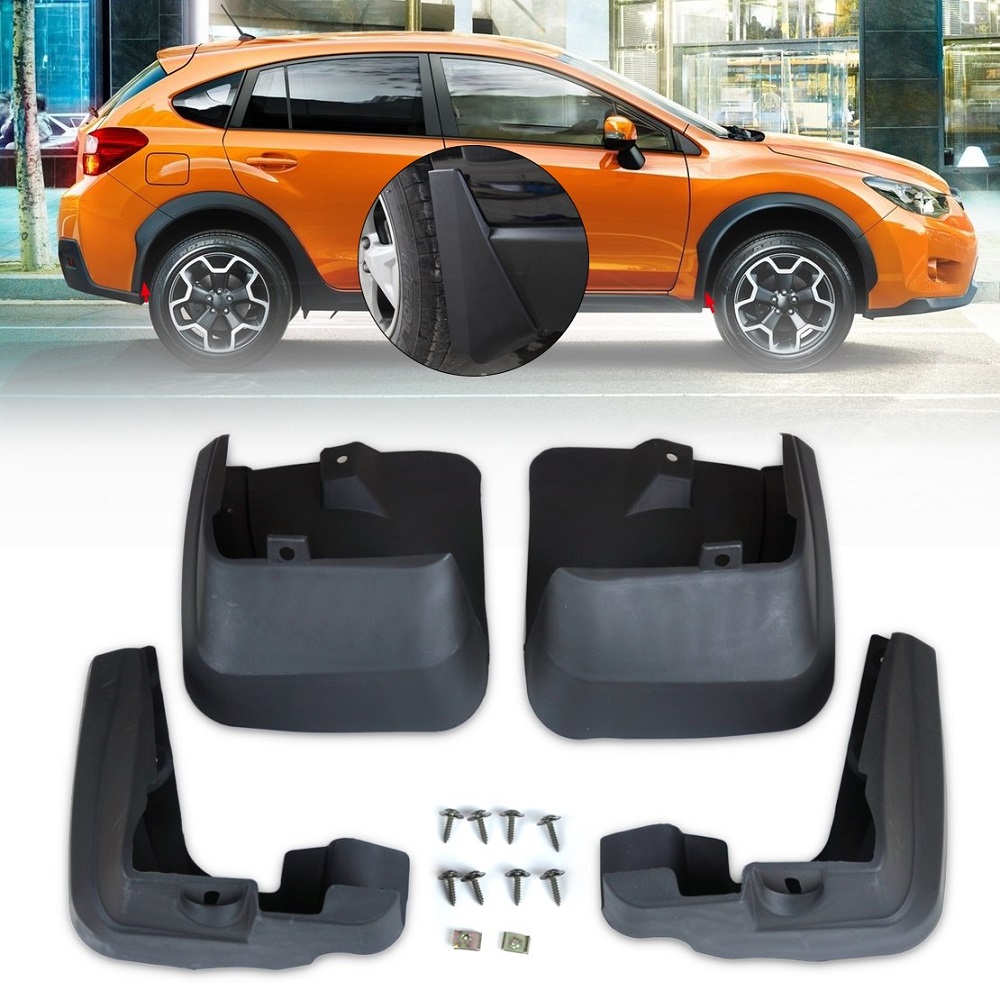 As mentioned above, splashers can be front and rear. They are also divided into universal (intended for any car) and individual (for a particular model of a certain brand). But you shouldn’t have a “one size fits all” approach to universal ones. There are huge crossovers and classic sedans, and it’s unlikely that the same universal splashers will suit both listed models. Although in appearance a universal splasher is a black rectangle that can be sold even without fasteners in the set. Such splashers attract motorists with their low cost. 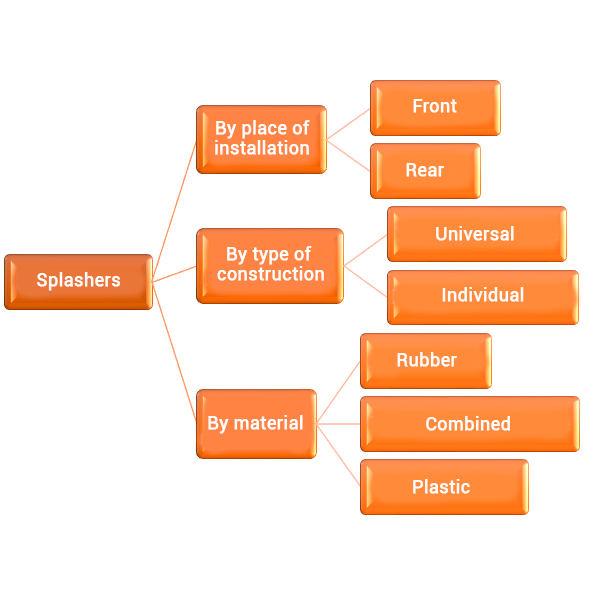 Individual splashers have a special design and shape, due to which they don’t let a single drop of water from under the wheels of a particular car reach its bottom. However, you will have to pay a little more for this advantage, but individual splashers are also often characterized by a longer service life.

As for the material from which splashers are made, the most accessible segment is rubber products. The advantages of rubber splashers are the simplicity of manufacture, excellent flexibility and ease of installation on the car, durability and low cost. But they can’t withstand very low or very high temperatures. That is, under domestic operating conditions, rubber splashers don’t always show themselves from the good side.

Plastic splashers are wear-resistant and durable even in conditions of high temperature differences. They are even available in different color variations, which makes “iron horses” more attractive aesthetically. But the plastic splasher has more chances to split than the rubber one. And such a risk always exists if you run over a curb or hit a boulder.

The rubber-plastic, or combined, splasher have all the advantages of two types listed above. These are very serviceable and flexible products that appropriately respond to temperature variations and withstand even the strongest blows. It is not difficult to guess that combined splashers are the most durable, although you will have to pay a considerable amount of money for this. The cost of this product is several times higher than the cost of rubber and plastic splashers.

How to extend the useful life of splashers

In order not to buy splashers every season, it’s necessary to make a right choice when buying. If you have to drive only in urban areas, you can choose an inexpensive plastic option. A purchase of splashers of any model shouldn’t be limited by price factors. You should always wonder if there is a special coating on splashers that can withstand the effects of various chemical reagents that are particularly strongly influence splashers in winter. Don’t be fooled by Chinese splashers – they certainly will not last longer than one season.

Always gently wash the car in places of wheel arches and splashers – this will prevent further accretion of dirt.

Drive carefully. Any high obstacles can damage the bottom of your car and break the splashers.

As soon as the splasher fails, it is necessary to install a new one in its place. Otherwise, not only vehicles moving behind the car will be in danger, but also the bottom of your car – the risk of damage to the latter will increase many times over. 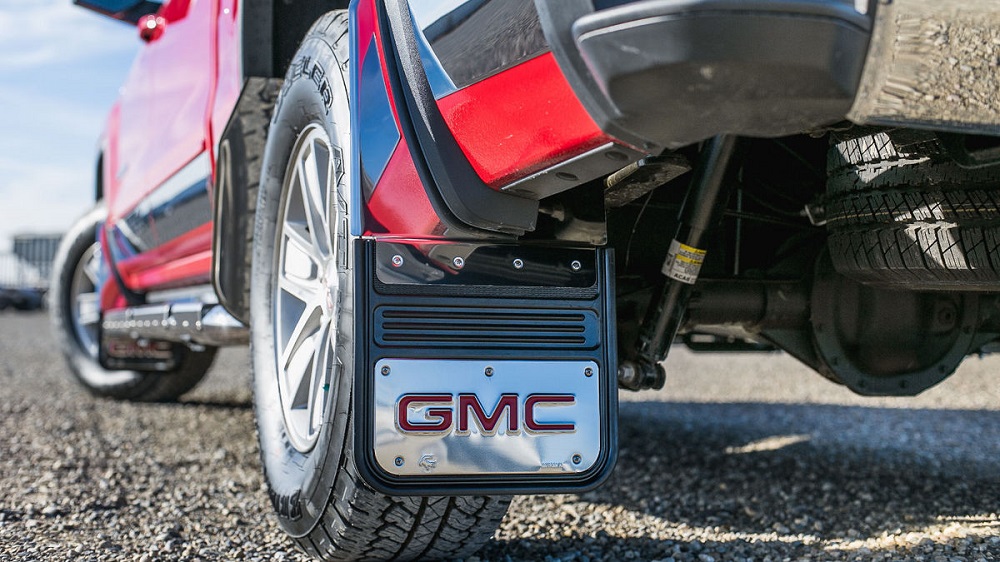 So, splashers are a very important element of a car that performs a protective function. It is strictly prohibited to drive on the road without splashers, because in this case, you will pose a serious danger to other drivers. But it is also forbidden to drive a car without documents, the main of which is a driver’s license. We invite you to quickly and easily process an international driver’s license on our website. It will not take you much time and effort.