There are many American automobile companies. However, not all of them can be considered legendary.  The Chrysler car company – can be. His homeland is Detroit – the cradle of not only American, but also the world automotive industry.

Despite the loss of independence (since 2014, 100% of Chrysler shares belong to the Italian concern Fiat), this brand retains its individuality and continues to produce cars, as well as aviation, electronic and space products.

Let’s get acquainted with Chrysler closer, because along with the glorious history, the concern also has a brilliant present.

History pages of the Chrysler Corporation

Chrysler, along with General Motors and Ford, had long been part of the Detroit’s “Big Three”, which included only the leaders of American automobile manufacturing. In fact, Chrysler was made by its founding father Walter Chrysler and based on the three ingredients of success – enthusiasm, energy and hard work. Surprisingly, in his youth, Walter didn’t even think about the automotive industry. He was a successful railway manager, and started as a cleaner in a locomotive depot. Chrysler bought his first car, already being the head of the Chicago City Railway Company – his managerial salary allowed him to become the owner of a rather luxurious car, a white Locomotive Phaeton with a red interior. And he saw it by accident, passing by the window of the showroom. Needless to say, Walter just fell in love with the gorgeous four-wheeled horse. He hadn’t yet learned to drive, but several times disassembled and assembled the car, trying to understand its design principle. And then, already 35-years-old Walter worked for the Buick company, raising the stock of General Motors, and then went to the Willys corporation and raised the concern Maxwell. Chrysler’s achievements as a crisis manager were so significant that he was considered the best American Manager of the automotive business. By 1924, in the commonwealth of Walter and three other equally talented engineers, the first model of Chrysler, the “Six”, appeared. Consumers accepted it with a huge success, and in the first year of sales, 32 thousand copies of this car were sold. In the following year, 1925, the company Chrysler, based on Maxwell Motors, appeared. The 4-58 model was changed with the 4-88 (last two digits meant the maximum speed, which were reached by the model). Commercial success was staggering, and, by 1928, there was an opportunity to buy out the auto company that produced dodges. 1933 marked the achievement of the title of the world’s largest automaker (even such car giants as General Motors and Ford were behind). And in 1934, the Airflow model was introduced, which received the world’s first curved windshield and automatic transmission.

During the Second World War, the automaker switched to the production of military equipment, becoming the largest supplier to the US and British armies. Chrysler produced not only engines for aircraft, but also military trucks, the M4 Sherman light armored tanks, equipment for the attack bomber B-29 and heavy weapons for bombers and fighters. The net profit from military equipment amounted to billions of dollars. Due to financial well-being, in 1945-47, Chrysler bought 11 new plants across the country. However, the founder of the concern didn’t see the success of his creation – Walter Chrysler died in 1940. 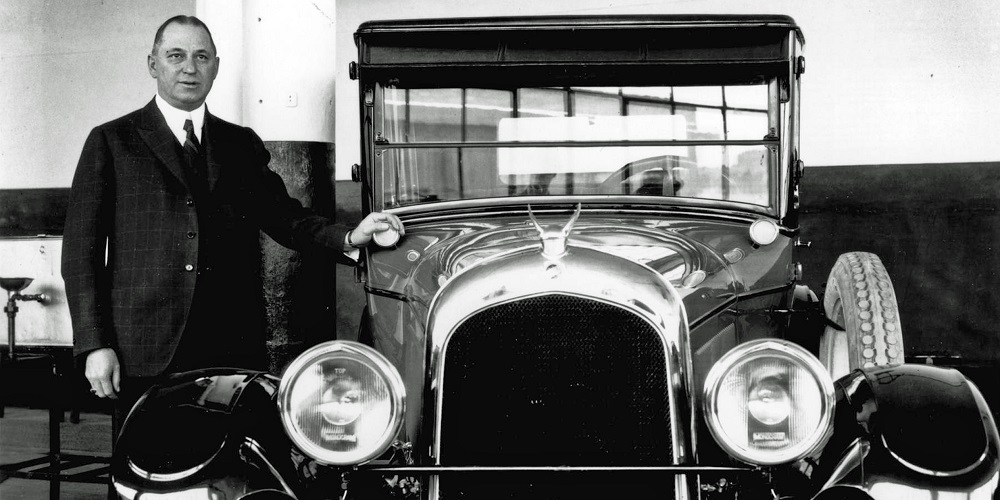 Even before the war, the concern was famous for installing oil filter elements, placing the engine on rubber mounts that removed vibration, installing carburetors with a downward direction of airflow, the invention of a single wraparound windscreen, etc.

Through the efforts of the new leadership of the auto giant, in 1951, the first Chrysler, which received a power steering, was presented at the car market. Later, all models of the company necessarily began to be equipped with an ignition key. In the same year, the Chrysler Hemi V8 powertrain was developed, but the engine was only used to create the next generation of sports motors. The powertrain under the Chrysler 426 Hemi name, with a capacity of 400 horsepower, brought victory to Chrysler cars at many international competitions, and in 1963 it was installed on the Chrysler Turbine Car. As the name suggests, the main feature of the car was a turbocharged engine that developed more than 500 horsepower. However, the development attracted the attention of the US government, all work on the engine was discontinued and transferred to the government, which classified further research.

The company lacked a leading genius of Walter Chrysler, the department of motor production started to make failures, and symptoms of the crisis appeared. Management mistakes affected the car assembly technology, which led to quality problems and caused a decrease in reliability and safety of the brand. Even the fact that in 1972-73 Chrysler was the leader in car sales didn’t save the concern from a decline in production by the end of the 1970s. Chrysler was at risk of bankruptcy, but the U.S. government took the side of the automaker and provided substantial subsidies to the main supplier of the army. In 1983, in collaboration with Japanese Mitsubishi, the automaker introduced the first Chrysler minivans. The economic situation of the car giant gradually improved, and, in 1987, a high-profile deal was made to acquire the Italian company Lamborghini, which specializes in manufacturing of sports cars. In the same year, shares of American Motors were bought out, such well-known brands as Eagle and Jeep came under the control of Chrysler. Then various perturbations, merger with Daimler, bankruptcy, merger with Fiat, came. Meanwhile, Plymouth (1928-2001), Eagle (1988-98), Imperial (1955-65), DeSoto (1928-61) existed in different years in the company as structural units.

What does Fiat-Chrysler Corporation offer to the world now?

The alliance with Italian Fiat allowed the legendary brand to “save face”. The marketing policy of the company remained thoroughly thought-out, there is enough capacity in the technological base of the concern, the dealer network has gained a worldwide scale, the motivation to create more and more perfect cars remains at a high level. All of the above makes the car giant Chrysler a great example of successful business in the production of cars. At the same time, the concern has several almost autonomous units: 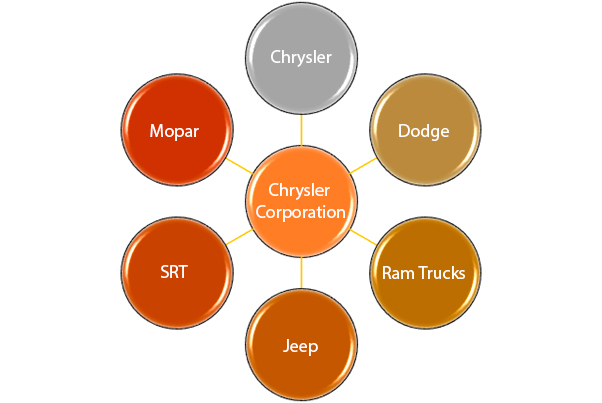 Passenger cars and minivans are produced by Chrysler division, Dodge produces passenger cars, minivans, crossovers and SUVs, Ram Trucks is engaged in the production of pickup trucks and commercial vehicles, Jeep specializes on crossovers, SUVs and off-roaders, SRT is optimized for high-tech versions of a car, MOPAR – for high-class pickups and SUVs versions.

From 2011 to 2014, the company actively produced the Chrysler 200 Convertible. This is a car with 283-horsepower 3.6-liter six-cylinder unit of the Pentasta family.

In 2014, the Chrysler 200 sedan class D entered the market. The Chrysler 200 became longer, wider and taller than its predecessor, although the distance between axles was reduced. All this significantly affected the aerodynamics.

In 2015, the Chrysler 300, E class sedan with a rear or all-wheel drive, was released, – an improved version of its predecessor. A dashboard with a large central display was completely revised. The model is characterized by a new steering wheel design and a redesigned climate control unit.

In 2017, Chrysler introduced an electric car called Portal at the Detroit International Auto Show. The Chrysler Portal concept was positioned as a car for a generation of “millennials” – people born in the late 1980s and early 90s, who, according to most anthropologists, are characterized by the greatest involvement in digital technology. The electric car is equipped with a face and voice recognition system, which is used to automatically apply the settings of some systems. In particular, the car can adjust the preferred temperature for a particular person, the level of interior lighting, as well as turn on his favorite music. Like many modern concepts, the Chrysler Portal carries on board an autonomous control system that is able to exchange information with other similar vehicles, as well as with urban infrastructure. According to official representatives of the company, the fully charged car can travel up to 400 km. 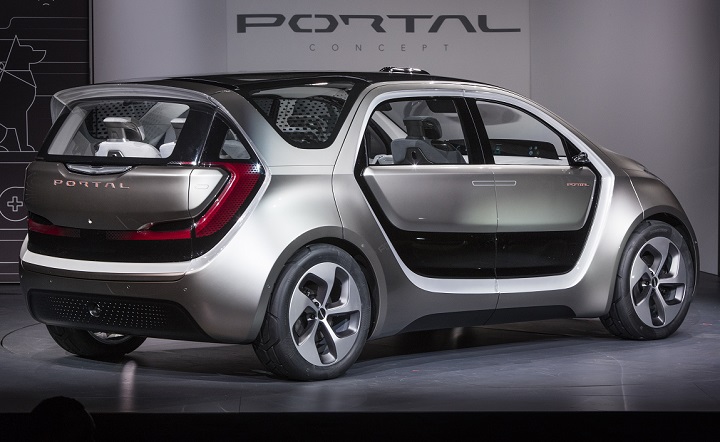 Chrysler cars today require the driver not only the preference of these models, but also the presence of a driver’s license (better an international one). If you still don’t have such a document, don’t worry. We invite you to quickly and easily process an international driver’s license on our website. It doesn’t take you much time and effort, especially since this document is useful while driving not only Chrysler.