The Skoda meets us with matrix headlights and silence inside after a good slam of the driver’s door. It’s like I went deaf. Other senses work: there is a pleasant smell, I see a steering wheel reminiscent of the past S-Class, large displays with a nice picture, alcantara on the front panel, contour lighting filaments.. Has the Octavia gone for promotion? But it doesn’t drive much better than its predecessor, and this stagnation is especially noticeable against the background of the progress that the Elantra demonstrates with the change of generations. 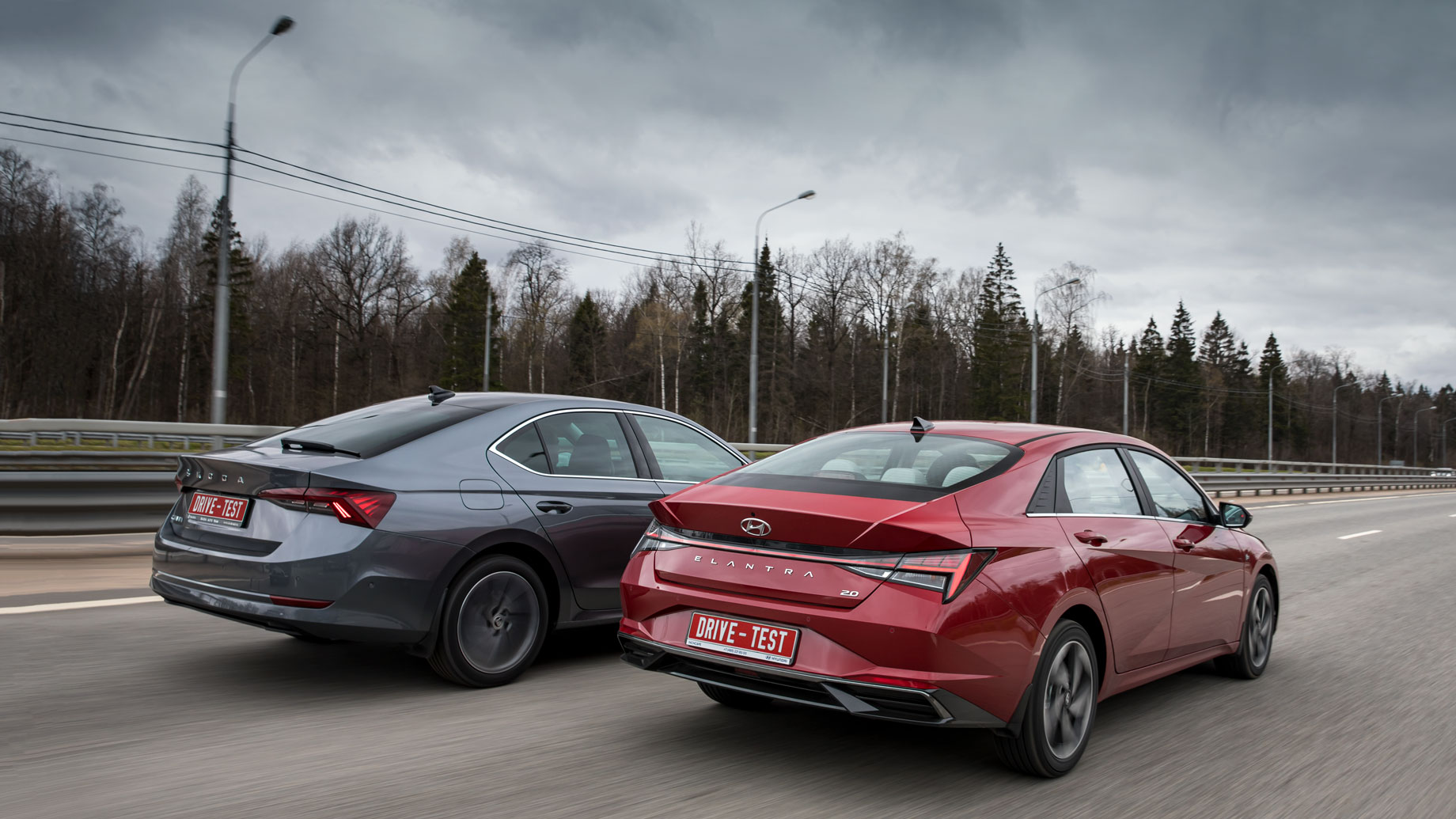 It is also not perfect, but at least provides a higher smoothness than the Skoda. It pays less attention to the micro profile, including through the 17-inch wheels’ operation (the Octavia has an inch more). It doesn’t give up on road junctions, and speed bumps can be taken by running. Objectively, there are enough vibrations — the Hyundai doesn’t ignore any average defect — but the acceleration peaks are smoothed out and don’t cause irritation. However, the Elantra feels loose on a broken road. As if its mileage is not 4000 miles, but forty times more.

But the Hyundai has an even bigger problem with noise insulation. Starting at low speeds, the interior is filled with the hum of tires, which progresses powerfully with the growth of the speedometer readings. And if there is rough asphalt interspersed with gravel under the wheels, the occupants of the cabin aren’t to be envied. At the same time, stones and sand drum in the wheel arches, and if you go in rainy weather, water also splashes loudly. The atmospheric engine also strains itself, screaming hysterically from under the hood with each intense acceleration.

If you forget about the tantrums of the lane control system, the Octavia treats the ears more delicately. There is less noise from the road in the cabin, the turbo engine, which works less often at high speeds, doesn’t bother, and the rear semi-independent suspension doesn’t produce a low-frequency hum, as on the previous model. But it shakes on the bumps! The liftback reports on potholes with a special predilection, and on large pits, the rigidity of the suspension is about to turn into cruelty. You can better your lot a little by abandoning the 18-inch wheels, but the chassis settings are primarily to blame for the poor riding smoothness.

Nevertheless, on the same miserable stretch of road where the Elantra bucks, the Octavia is more focused. Much more rigid, but still the high breed is felt in this rigidity. And I don’t buck along for nothing — the chassis can be a source of endorphin. Because the Skoda solidly rushes along the bends of the road, and the precise steering force logically increases or decreases. The full-time stabilization system is liberal and doesn’t immediately fend off a skid after a sharp throttling back. The brakes also keep an active pace, and it is a pleasure to work with them at high speed. In the city, the combination of free running and a sharp occlusion that replaces it requires an accustomization.

Conducting the 150-hp 1.4 TSI turbo engine is possible without problems. The torquey  four-cylinder motor is responsive, always ready to accelerate. When accelerating from rest, it quite easily outperforms its own certificate data by two tenths, gaining 60 miles/h in 8.8 second, according to Racelogic, however, only with one driver. An eight-speed automatic transmission also matches, selecting the right gears in time, quickly and seamlessly shifting down even with a slight pressure on the accelerator. And if you press the pedal harder, the “hydromechanics” shifts four gears down without fuss.

The Elantra also has a classic automatic transmission and develops 150 hp. But the naturally aspirated engine is sluggish at low revs, comes to life a little at medium and pulls confidently at high ones. When the Octavia is not around, it seems that the Elantra is not inferior to it at the start to the floor. However, the device registers 9.9 s in the best attempt against the factory 9.8. And when accelerating on the move, whether in the city or on the highway, the Hyundai is unable to compete with the Skoda — it has much more torque (250 N-m vs 191); it is achieved earlier and in a larger engine speed range. The convenience of traction control is also so-so: the gas pedal is damped more strongly than in the Octavia, and the six-speed gearbox works slower.

Although the Elantra is ready to move fast — tenacious, focused, eager to turn! The rolls are surprisingly smaller, as is the diagonal swinging in turns, and there is almost no tendency to skid even with the stabilization system disabled. The car can! But the driver doesn’t want to. The viscous steering wheel is almost devoid of feedback, and the force is always the same. 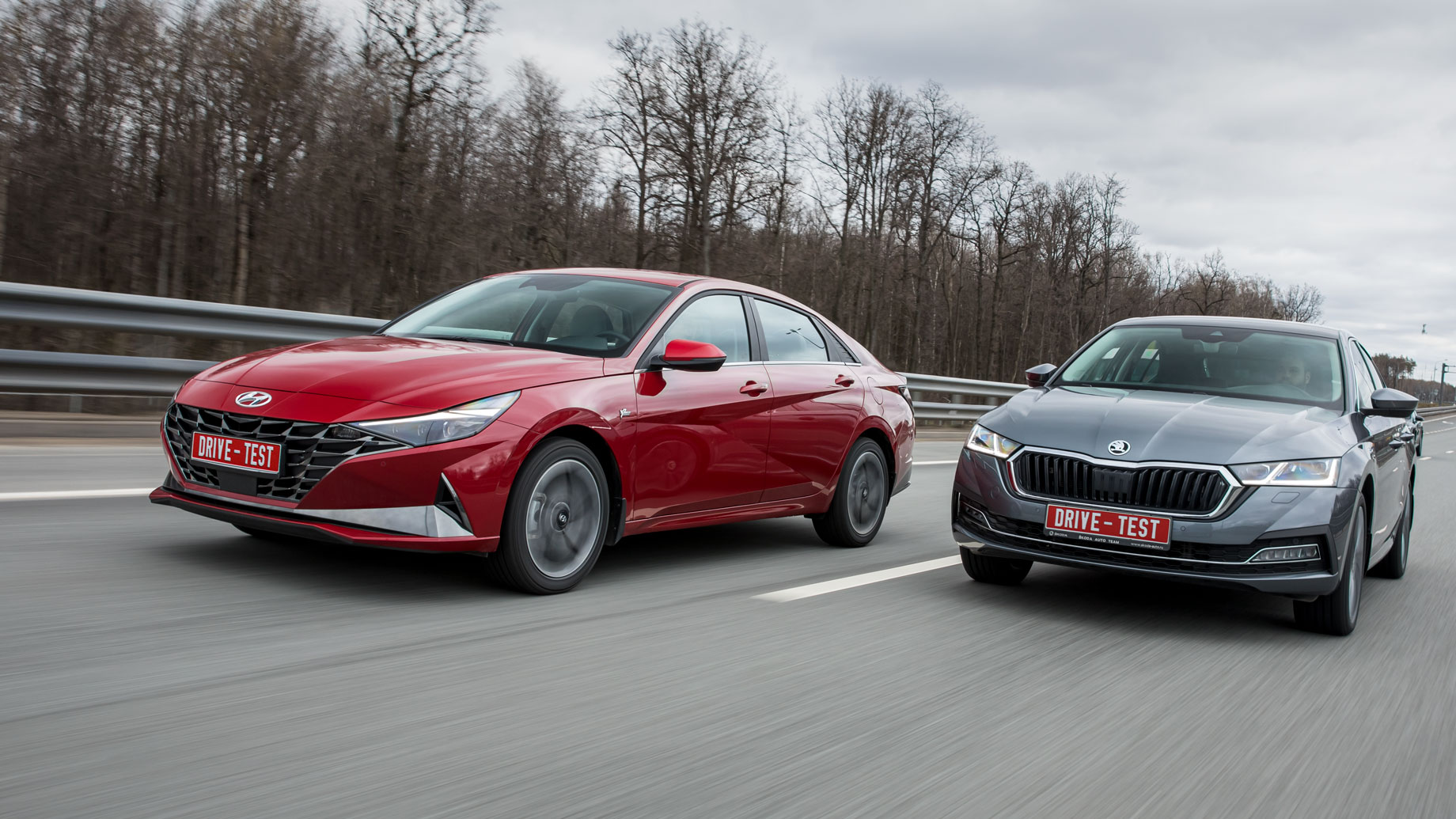 There are also problems with brakes traditionally for Korean cars — they simply can’t withstand active driving with frequent slowdowns. The pedal becomes softer, the smell of burning appears… But in calm driving mode, I liked the brakes even more than those in Octavia — the efficiency is the same, and the braking intensity is regulated more by pedal effort than by stroke.

In general, the buyers of the Elantra are lucky. With such a spectacular appearance and interior, it could drive primitively, and none of the customers would be bothered by it. But the engineers have achieved a good balance of the chassis. Plus, the Hyundai has more comfortable front seats, calibrated geometry of the rear seat fit, better visibility of the mirrors. The Elantra is evolving! And yet I can’t definitely advise you to buy the Hyundai. The Koreans didn’t put enough noise insulation in the car and went too far with the economy.

The hood without gas struts, cheap trim materials, the back of the driver’s seat without a pocket are an incomplete list of annoying things. 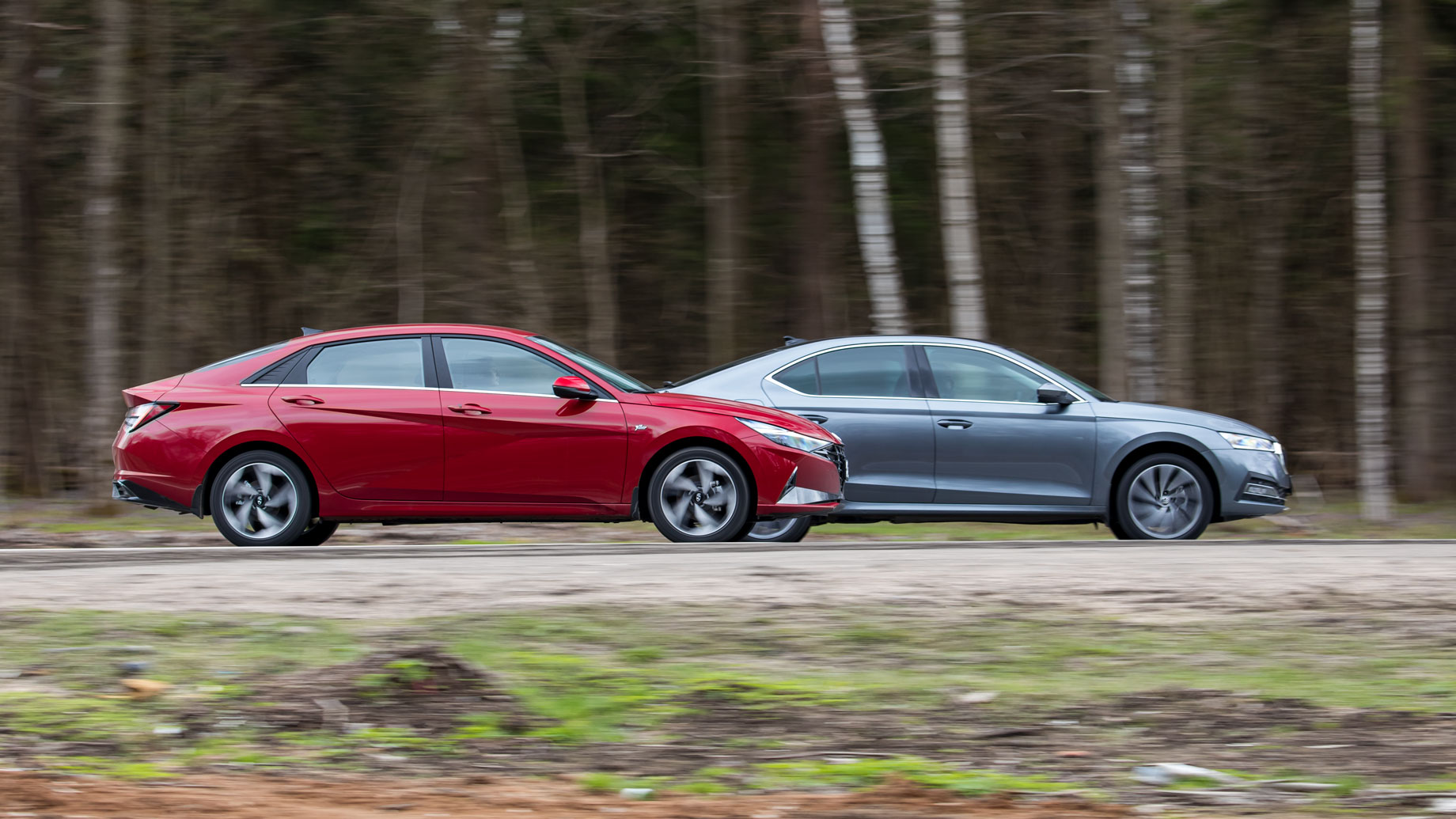 The Octavia, in its turn, has a crisis of self-determination. This is almost the most family car in the class. It is more comfortable to get in and out of the Skoda, it has a more spacious cabin. It’s even awkward to talk about the trunk — another level of convenience and capacity. But why do the rigidity and noise of the Octavia resemble the Cayman on 18-inch wheels? If you believe our editor-in-chief, when you are behind the Octavia’s steering wheel in a straight line, it’s easy to imagine that you’re driving a cheap Porsche. Where is the logic here? Moreover, the work in the direction of comfort was clearly carried out: at low speeds, the shock absorbers work more delicately than before, the passage of speed control bumps is accompanied by swinging. But  it’s still too much with the general degree of Sport.

As in the case of the Elantra, I wouldn’t categorically recommend the Octavia. But within the framework of our comparative test, it looks preferable. It is difficult to ignore not only the unattainable convenience and practicality, but also a higher sense of quality, noticeably better sound insulation, a more pleasant power unit and steering. The Czech liftback is simply more technologically advanced than the Korean counterpart. And the Czechs can improve the riding smoothness. The comfortable Karoq won’t let us lie.

This is a translation. You can read the original here: https://www.drive.ru/test-drive/hyundai/skoda/60a3de51631bce01e036c896.html

Please type your email in the field below and click "Subscribe"
November 10, 2017 How to travel during a blizzard 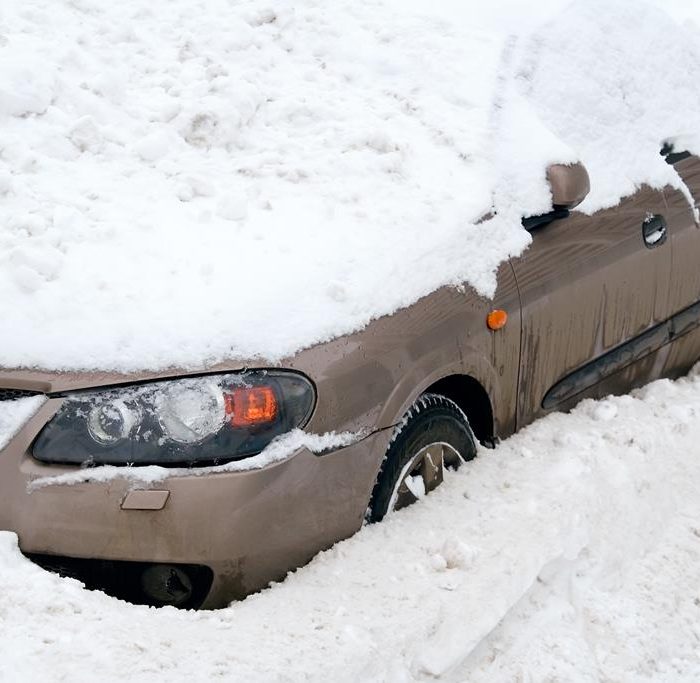