Nizhny Novgorod at the World Cup 2018

Nizhny Novgorod, Samara, Kazan and Volgograd form the so-called Volga-Vyatka region. Let’s find out when and which matches will be held in Nizhny Novgorod this summer.

This stadium is truly one of the most striking sports venues in Russia. In fact, the stadium on Strelka metro station is considered to be the best project of the upcoming Mundial 2018. Apart from the cutting-edge technologies that meet FIFA standards and requirements, the designers made an attempt to join together football, water and wind since these are the words that best describe the nature and culture of Nizhny Novgorod. It is clear from the outcome that they have managed to achieve this goal. 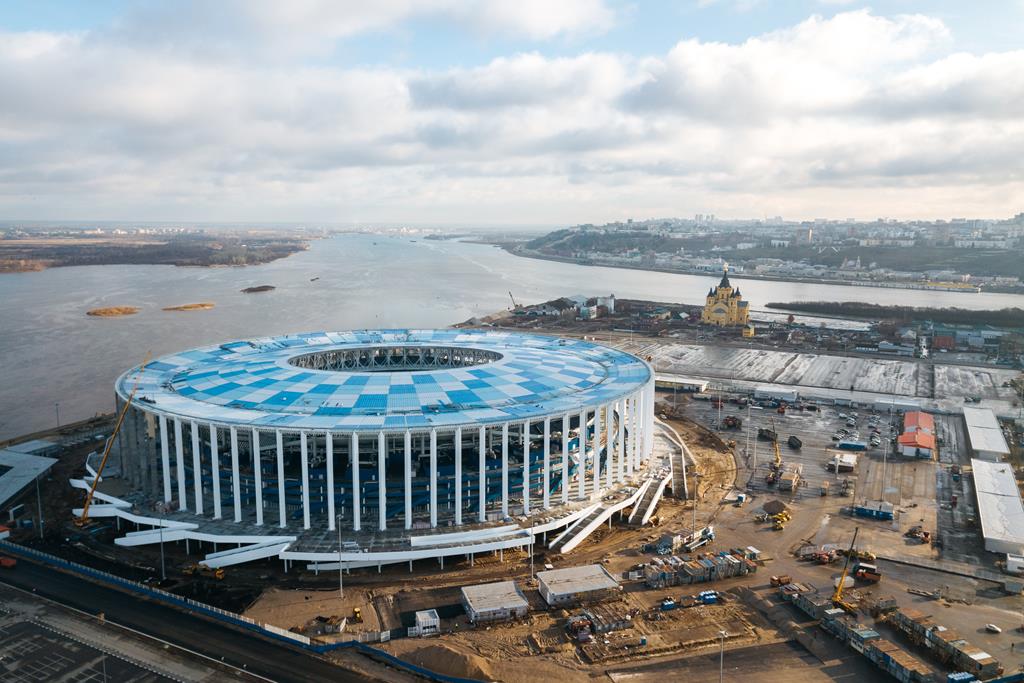 A tremendous stadium valued at 17.9 billion roubles was built on 85 hectares land near the place where two rivers — the Oka and the Volga — meet. It directly abuts the historical buildings and fits harmoniously into the urban environment. The territory of Strelka has turned into a recreational area associated with a pedestrian boulevard. This solution has made Nizhny Novgorod Stadium not only an outstanding sports venue but also a wonderful recreation area.

The stadium itself has a repressed style due to several historical sites around it. The stadium bowl is hidden behind a semi-transparent facade decorated with triangular pads all across the perimeter of the building. Here you can find pedestrian staircases which are tangential and lead to the aisle. To highlight plasticity and airness of the stadium, the designers decided to implement arena facade illumination in the evening. This idea was adopted at once by the assignee, and now the streets of Strelki district are all lit up and glowing. 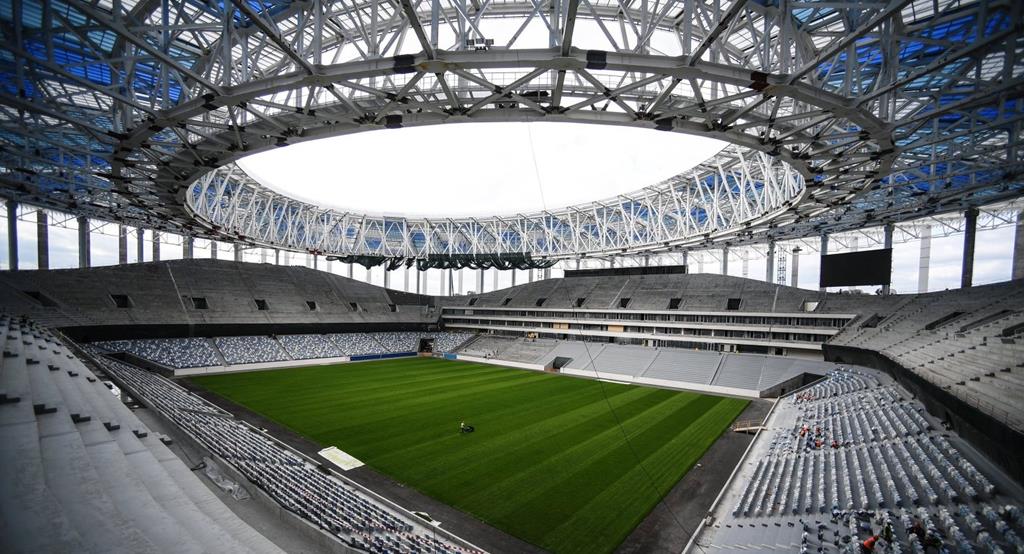 Today the capacity of Nizhny Novgorod Stadium is 45,000 spectators. After Mundial 2018, this number will be reduced to 35,000. It will turn into a home arena for the local FC Olimpiyets, thus, will be further used as a venue for various entertainment events.

Moreover, a round of 16 will be held in Nizhny Novgorod on the 1st of July while a quarterfinal will be held on the 6th of July. 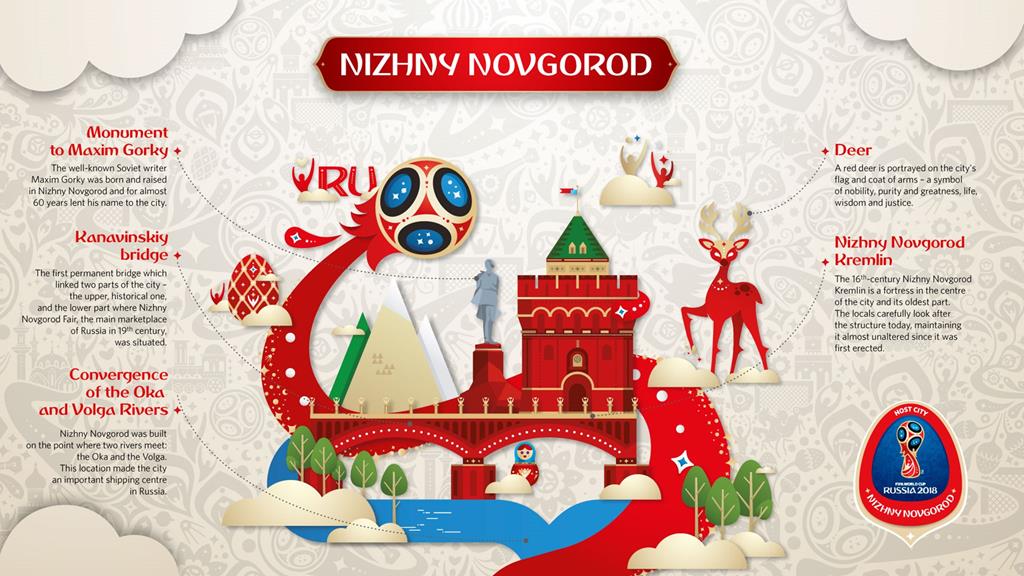 How to rent a car in Nizhny Novgorod

To rent a car in Nizhny Novgorod, you must have a passport and your valid national driving license. An International Driving License is also welcome. Usually there are some age restrictions (you must be at least 25 years old to rent a car) as well as driving experience requirements (3+ years). Then, if you are going to book a car in advance, you can surf the Web. As a rule, such companies offer 24/7 online booking. However, if you want to rent a car at the airport, it won’t take more than 15 minutes. Look through the car rental agreement attentively, decide on the type of insurance, examine the car for damages or inconsistency with the rental agreement. Some companies limit the mileage, however, there are special offers with no restrictions. You can choose a car with a GPS-navigator if you are going to go to an unknown location. The amount to be paid at once usually includes the rental cost and deposit.

The most reliable rental companies in Nizhny Novgorod are RENT-NN, Car rental NN (Прокат авто НН), Car rental (Аренда автомобилей), Emae Car rental (Ё-маё), Vokrug Sveta (Вокруг Света). By the way, the latter provides the cars for the drivers who are under 20 years of age and have a driving experience of less than a year.

What to see in Nizhny Novgorod

Nizhny Novgorod is an unusual city that combines the features of the Volga merchant city as well as the signs of the big urban centre. Moreover, it is situated at the confluence of two great Russian rivers, the Volga and the Oka. One can walk there endlessly. The city will provide the tourists and fans with countless attractions. Old streets, embankments, churches, landscape parks — all these places are worth visiting!

There are several must-see streets in the city. First of all, the Rozhdestvenskaya Street that stretches from the National Unity Square along the lower bank of the Volga River to the Oka and further along it. The local building is a perfect example of urban architecture of the 18th – 19th centuries, which has remained almost unchanged. There are 35 architectural monuments on the Rozhdestvenskaya Street, the oldest of which dated from the 17th century, which is quite rare for Volga cities. 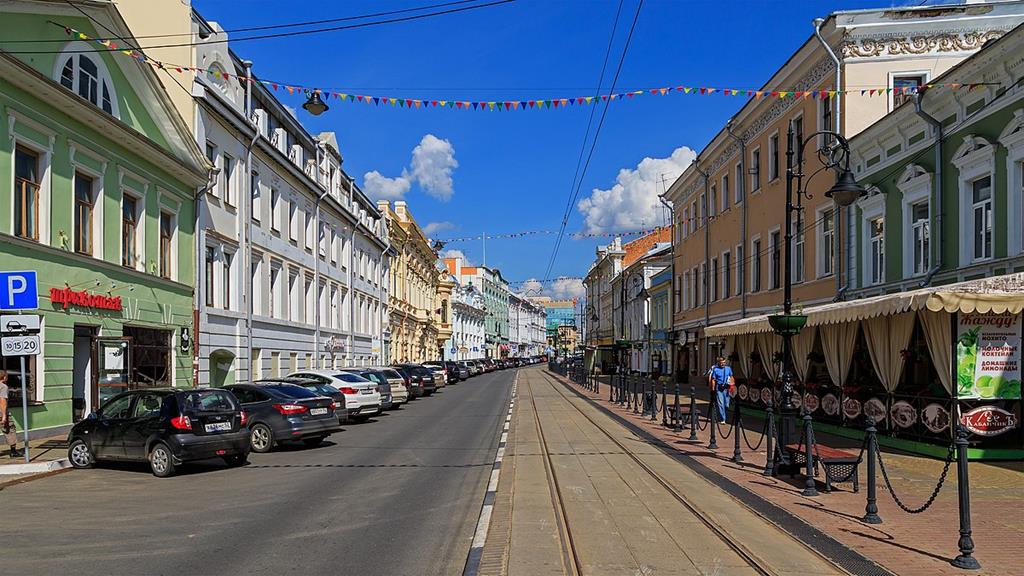 The major attraction here is the Church of the Nativity of the Blessed Virgin Mary, which is usually called Christmas or Stroganov. This is one of the best examples of Stroganov style, an all-Russian barocco type. That’s the name of the buildings, which appeared by order of the merchant Grigory Stroganov. 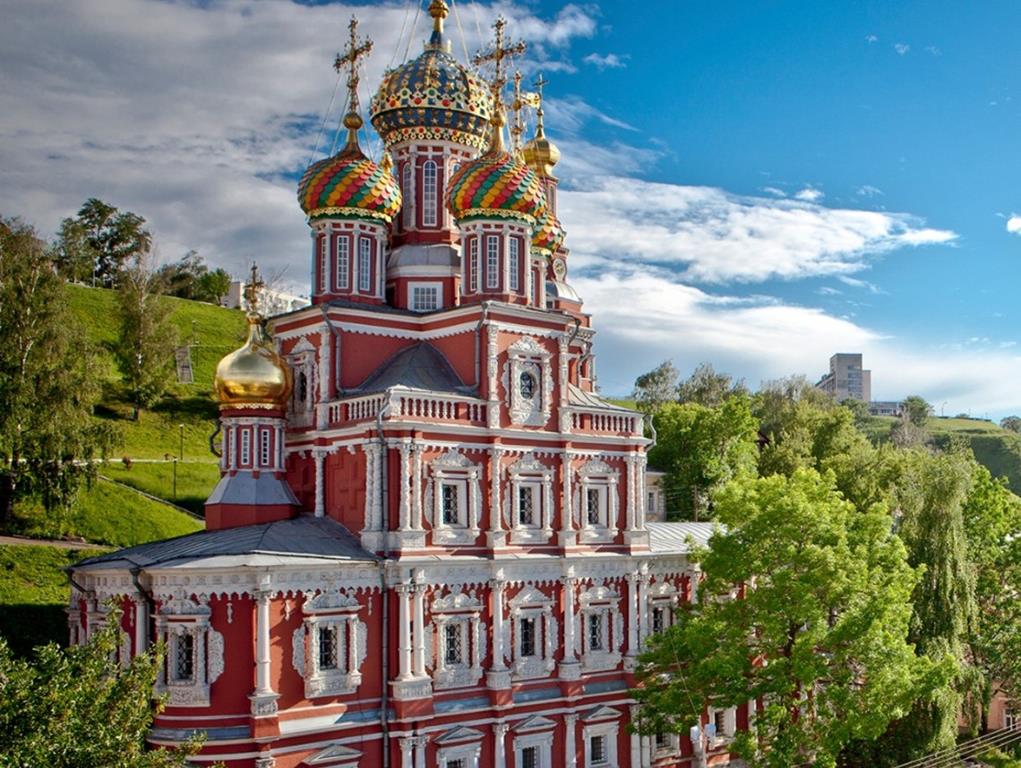 The main street of Nizhny Novgorod is the Bolshaya Pokrovskaya Street. It links the Square of Minin and Pozharsky with the Lyadov Square. This street has gained the status of the main street in the end of the 18th century. Before the revolution, it was considered to be of the nobility. Ordinary people were not allowed to be here. It got its name in honor of the Church of the Intercession. The street is over two kilometers long and the bigger part of it is for pedestrians only. 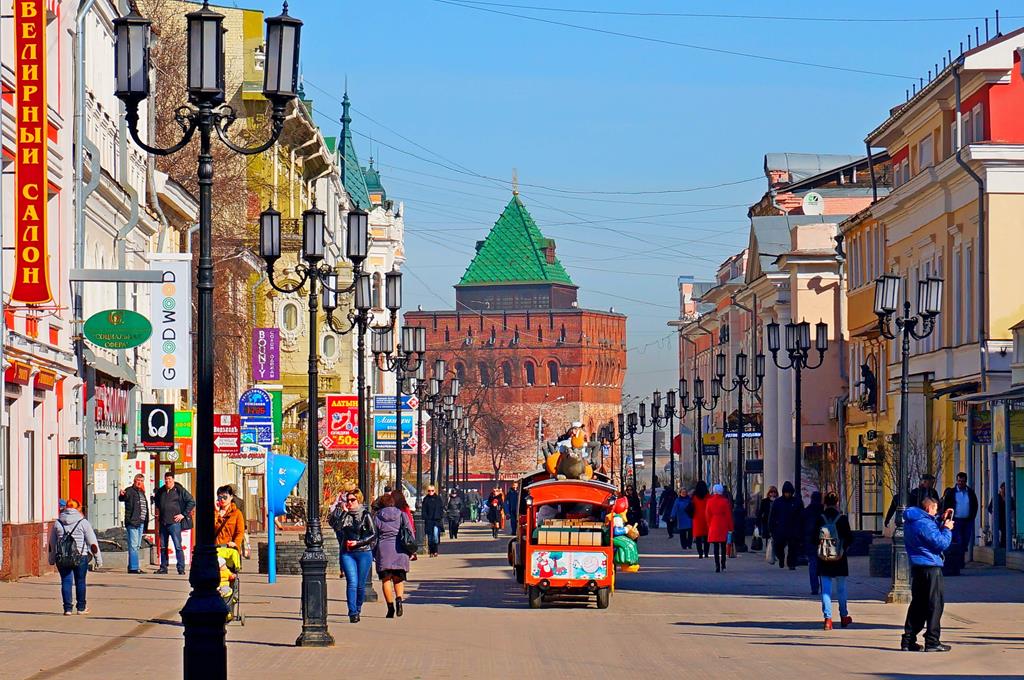 There are many remarkable architectural monuments on this street. For instance, the Trade Union House designed in French Baroque style, the former building of the Upper-Posad Chambers of Commerce with Tolstoy, Pushkin and Dostoevsky busts, art crafts salon where you can buy various handicrafts, the Puppet Theatre and Gorky Dramatic Theatre.

In the evening, the Bolshaya Pokrovskaya Street looks stunning. Slow down the pace and go to the Kremlin and then to the Chkalov Stairs. The Chkalov Stairs, a monumental eight shaped construction with 650 stairs, links the Square of Minin and Pozharsky with the bank of the River Volga. The huge stairs was laid in 1943 after the Battle of Stalingrad. It was named after a famous aircraft test pilot born in Nizhny Novgorod province Valery Chkalov who made a non-stop flight Moscow – Vancouver via the North Pole in 1937. 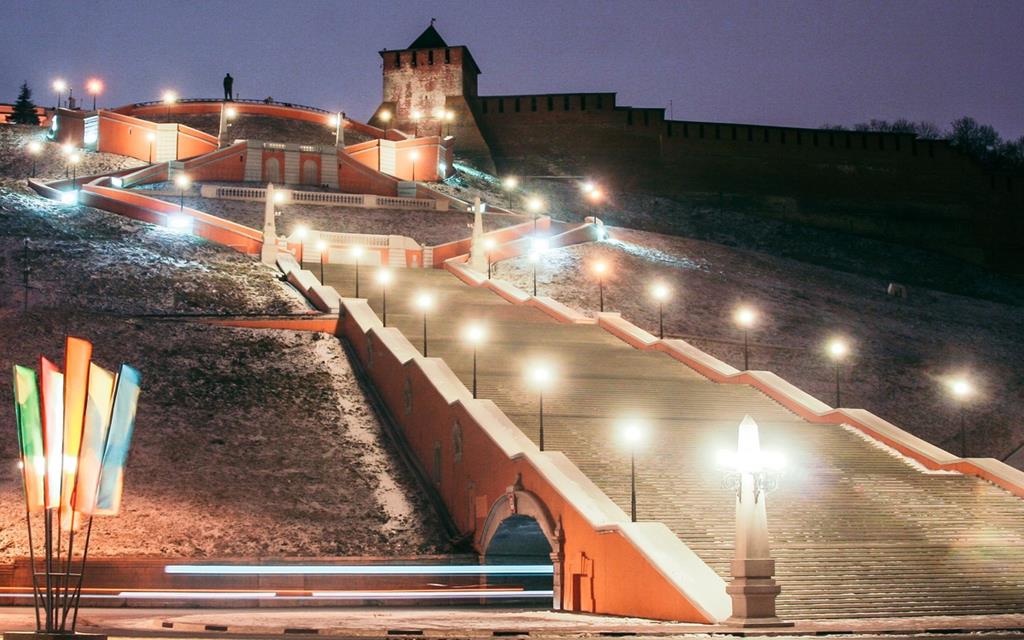 Nizhny Novgorod has the longest cableway in Europe. It stretches all across the wide and full-flowing Volga River and links Nizhny Novgorod and Bor where one can walk the hills of the Moss mountains. A view from the cableway of the city and the river will be one of the most memorable and striking experiences. 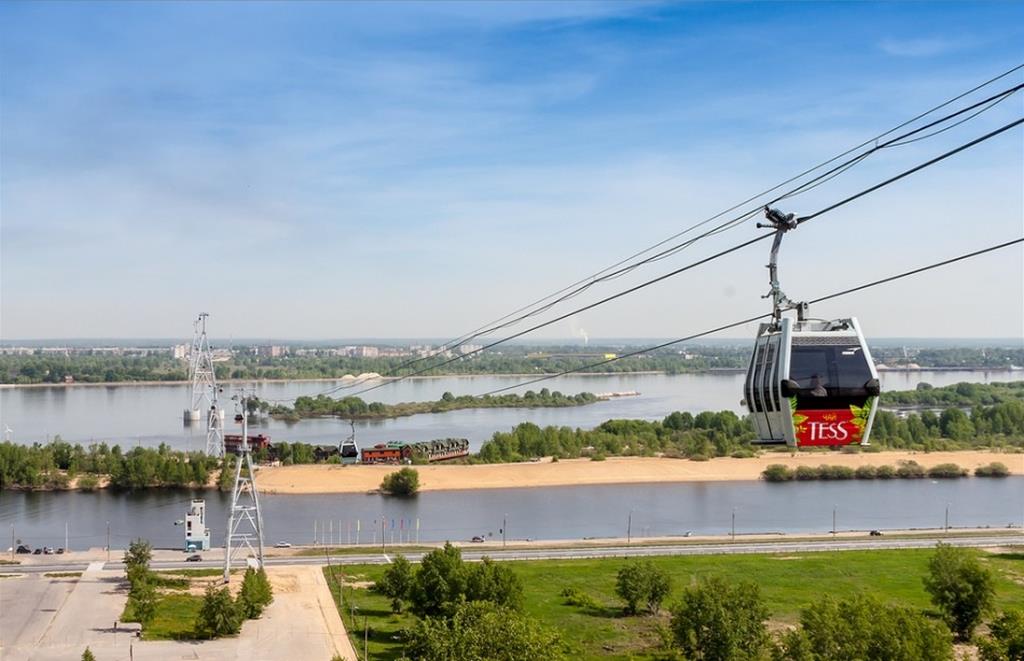 The key attraction of Nizhny Novgorod is the Kremlin. The construction started in the beginning of the 6th century. As a result, there appeared the entire city which was to protect it from the Tatar raids. A two-kilometre wall of the Kremlin was fortified with thirteen towers, however, only twelve of them remained. There was a permanent garrison and the large number of arms. As soon as the Kremlin lost its military significance, the authorities decided to move here. 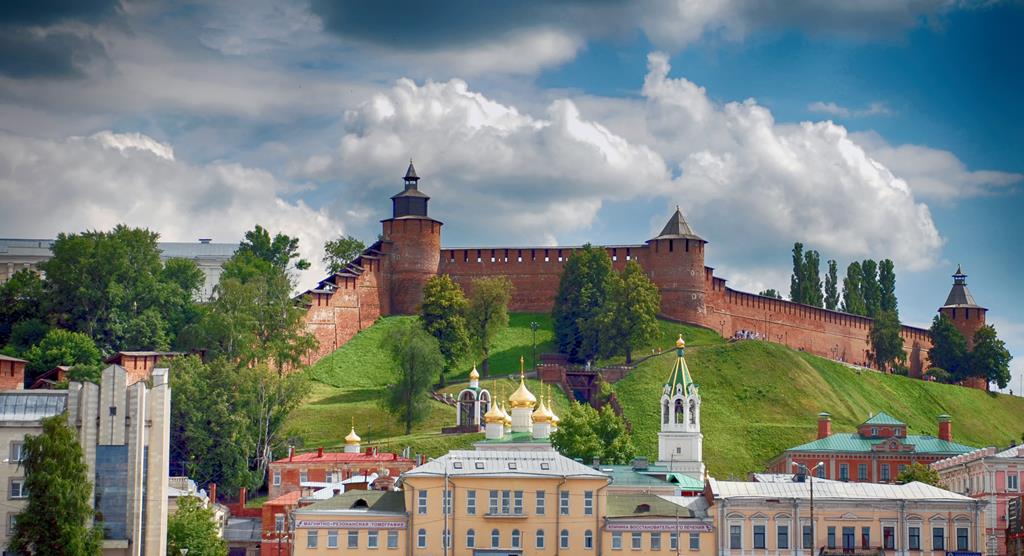 Actually, if you happen to visit Nizhny Novgorod (or simply Nizhny), you must see the Nizhny Novgorod Ostrog, Pechersky Monastery, the Rukavishnikov’s Mansion, “Electric vitamins”, Bugrov House, the Cabin of Peter, the State Bank, the Holy Cross Monastery,  the Cathedral of the Archangel Michael, the Kvarki Museum, the “Locomotives of Russia” museum, Nizhny Novgorod Fair, Fedorovsky embankment, the Botanic Garden, the Zoo, the Planetarium, Children’s railway, etc.

This is where Khokhloma painting took root. Lace-making and articles made from bones gained much popularity. Moreover, the artists love this city for those views that you hardly ever find anywhere else. The most striking views can be seen from the Upper Volga embankment. The experts of beauty seek inspiration in “Switzerland” park. Certainly you can’t walk great distances to see all these attractions unless you have a car. Thus, go for it! 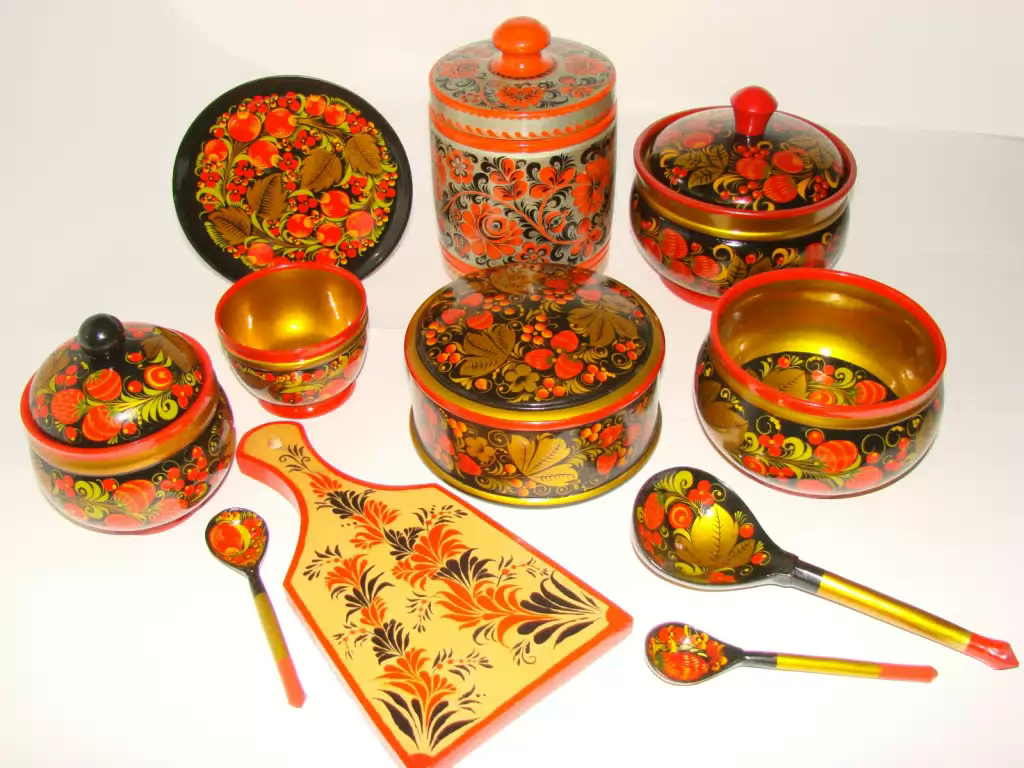 If you still have no International Driving Permit, apply for it here. We offer fast processing and secure payment. With our IDL you can drive confidently everywhere in the world!

Please type your email in the field below and click "Subscribe"
June 01, 2017 Alcohol and drug testing procedures in different countries 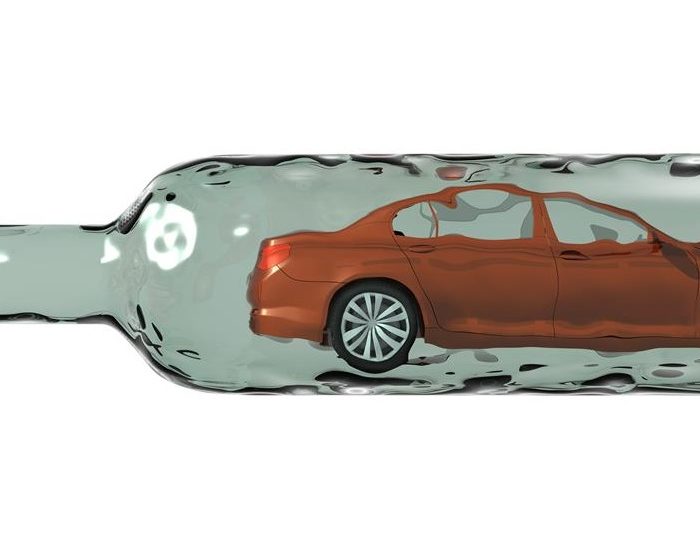 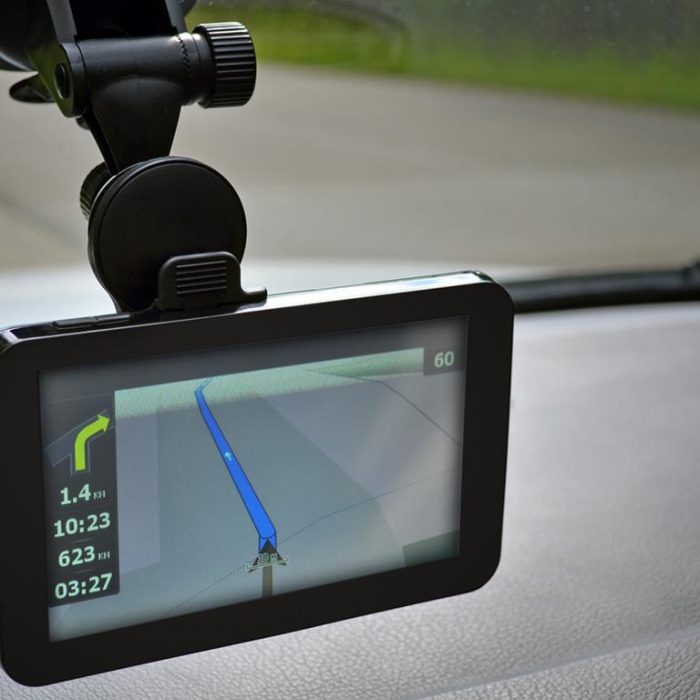 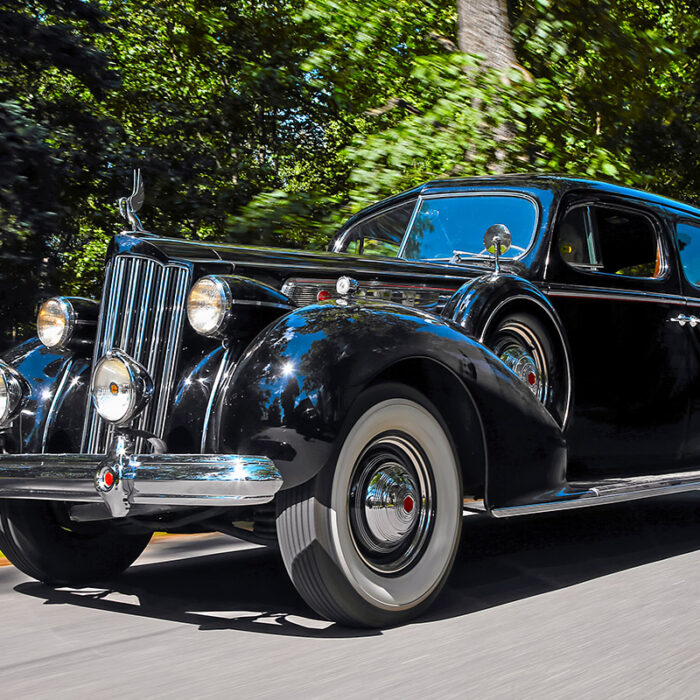